Meet Andrew Whitmarsh. The adventurous travel writer and author of the newly released walking tour guide, Jakarta: 25 Excursions in and around the Indonesian Capital. 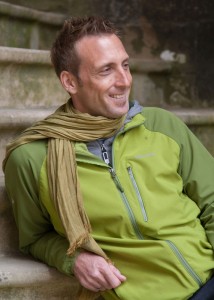 As a travel writer you must be quite well acquainted with the islands of Indonesia. What’s your favourite spot?
I like to be on the tops of volcanoes, no matter the island. Whether it’s the ever-explosive Semeru volcano in East Java, the massive Kerinci volcano in West Sumatra, the budding Krakatau volcano in the Sunda Straits or Rinjani Volcano of Lombok.

Are there any places you haven’t been to in Indonesia that you’re itching to visit?
Papua is the only place left that is a ‘must’ for me. I’d love to climb Puncak Jaya (Carstensz Pyramid) or do some serious trekking in remote areas.

And what was life like before Indonesia?
Not nearly as exciting. I lived in a remote mining town, deep in a canyon, in the Republic of Georgia for 2 years before coming here, which was great, but the things I’ve seen and done here in Indonesia in the past 8 years have been enough to fill a lifetime. Luckily mine’s only half over.

You recently wrote the travel guide, Jakarta: 25 Excursions in and around the Indonesian Capital. How did the idea come about to write a walking-tour guide?
When I first got to Jakarta, I set out exploring the city immediately on foot and by bicycle. It wasn’t long before I realized the city was full of incredible things to see and places to go, contrary to what everyone around me was saying. All my friends kept complaining there was nowhere to go and nothing to do, but I knew otherwise. So I set about gathering information, drawing maps and crafting the initial chapters of the book.

Melanie Wood is your wife and photographer for the guide. How did you two meet and how has it been collaborating with your other half?
I met Melanie in Georgia, where she was working in Tbilisi as a journalist and teacher. I fell under her charm immediately and eventually proposed to her at 10,000 feet on Slamet, a very active volcano in Central Java and then married her in a 14th century cave church in Central Turkey last year. She’s very adventurous and loves exploring the tiny streets of the city, so it’s been a great partnership. Be sure to check out her blog www.gangs-of-indonesia.com Who did you have in mind when you wrote this book?
The expats of Jakarta. These poor folks generally keep themselves locked up behind gated communities and sequestered to the small areas they feel comfortable in, not because that’s how they want to live, but because there is such a dearth of reliable information on where to go and what to do. In addition, they’ve gotten so much misinformation about the city that they’re scared to venture out and explore and they’re under the impression that walking is impossible, but that’s far from the truth.

What do you hope to achieve through this guide?
I honestly love Jakarta and I’d like other people to experience a slice of the good times. If you go out at the right times, to the right places, properly prepared and with the right frame of mind, this city will blow your mind. Don’t forget though, to truly experience the city, you need to do three things: Stay off the main streets, only travel by foot or becak and talk to as many people as possible.

Which of the 25 excursions from the guide is your favourite?
For culture, I love the Cikini excursion, for history, the Monas/Pasar Baru excursion, for sheer variety the Blok M excursion and for weirdness the Glodok/Mangga Besar excursion. My favourite excursion is Bendungan Hilir – a little known gem of a neighbourhood right downtown.

What challenges did you face when putting this book together?
First of all, Jakarta is huge, so it took me years to scout the whole city to find suitable locations, activities, sights etc. I’ve bicycled hundreds of miles criss-crossing Jakarta. Next was photographs, not every day is good for shooting so Melanie and I had to visit and re-visit a lot of areas. Another was finding accurate historical and contact information. Finally, I put my life at risk quite a few times such as riding on the top of a train where I nearly lost my head on an electrical wire. 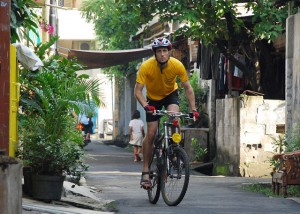 Having spent so much time travelling the streets of Jakarta, what have you come to love most about the city?
The people are the friendliest I’ve met, anywhere in the world. No matter how poor, or how destitute, they have treated me with respect, with humour and with open arms. I never once had a safety issue or was abused and believe me, I’ve been into some really ramshackle places. I also love the labyrinth layout of this city. I feel like a mouse in a kid’s cardboard maze, running around, trying to find the prize.

Are there any things you dislike about the city and what would your advice be to overcome the negative aspects, like traffic for instance?
I don’t like the noise and pollution from traffic. My biggest advice is to go out as early as possible and to stay off the main roads. Driving on major arteries, Jakarta often looks like hell, but step a block or two off the main path and you can find heaven.

Thanks Andrew! To get in touch email, [email protected]