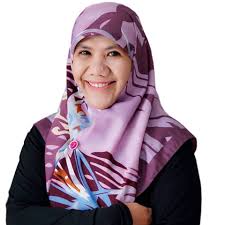 Poised amongst the top ten female writers in Indonesia, Helvy Tiana Rosa has produced 50 written works including short stories, plays and poetry, in addition to her role as past Editor in Chief at Annida.

She has been a driving force for women and active in many literary groups. She also founded a forum to establish writers worldwide and has received a strident list of writing and empowerment awards for her efforts. Currently, Rosa is a lecturer and theatrical coach while finishing her PhD in literature at the University of Indonesia.

You are a prolific and beloved writer from Indonesia. Importantly, you are female and Muslim. How does this influence both your subject matter and professional outreach?
Some researchers, both in Indonesia and abroad, regard me as ‘Muslim-Feminist’, although I don’t think it is properly put. I indeed use female characters with strong personalities in my works. Of course they can’t solve all of their problems, but at least they can show Muslim women active in the real world. Many readers say my stories enlighten them to do more for their family and society, as women and as Muslims.

As an author, you have an earnest heart and desire for your audience. What short list of your books do you see as your legacy and why?
Of the books I have written, three heavily influenced my career. First is Ketika Mas Gagah Pergi (When Brother Gagah is Gone), a collection of short stories, published in 1997. Literary researchers like Professor Monika Arnez (Germany) have labelled this book as the pioneer for the Islamic literary movement in Indonesia.

The second book is Bukavu (2008), another collection of short stories, focusing on the aesthetical element of the Islamic literary genre. This won the Khatulistiwa Literary Award that year.

The third one is Tanah Perempuan (Land of the Women) (2005,) my first drama script to be published as a book. Inspired by the tsunami tragedy in 2005, I dug deeply into the history of Aceh’s heroines from 17th, 18th, 19th and 20th centuries to tell their inspiring stories and lift their spirits, especially the women, who suffered most from the disaster. The script was selected as one of the three best scripts during a workshop held by Jakarta Arts Council (2005).

In 1997, you established Forum Lingkar Pena (FLP). What led to the founding of this successful network?
My sister, Asma Nadia and I established FLP in 1997. Since then, people from all ranks of life have joined our ‘Indonesia Reads & Writes’ movement. Today, there are about 10,000 volunteers in 150 cities worldwide, encouraging and helping each other to write and publish their thoughts. Millions of Indonesians, most of them young people, have participated in various FLP workshops. Thousands of titles have been published as books, as well as stories in newspapers and magazines. Some have made their way to television and cinema including Ketika Cinta Bertasbih, viewed by almost 500,000 people, one of the highest in Indonesian history. With corporate help, FLP establishes Rumah Baca & Hasilkan Karya (House of the Light) in almost every city where there is a representative office. In 2008, FLP won the Danamon award as a “Hero of the Society”as a non-profit. The success of FLP reflects the continuing passion and hard work of its volunteers; I only put forward the first step.

For a decade, you worked as Managing Editor, and then Editor in Chief at Annida, a famous Indonesian Islamic teen magazine. What new opportunities did this unique format present?
I worked at Annida from 1991 to 2001, building up my writing career. The format effectively penetrated young target segments, as none with Islamic content existedthen, other than story-magazines with a non-Islamic focus. Annida gained popularity in Islamic boarding schools throughout Indonesia. Parents also welcomed the Islamic content provided to children and teens in a subtle, entertaining way. Annida published 100,000 copies per month at that time, with a small return rate. It was an impressive number, even compared with general teen magazines.

With the founding of Bening Theatrical Company, you wrote and directed plays with female companies. Why did you make the leap to the stage and what are the rewards of this medium?
Drama play is not new for me. I have been participating since elementary school. A dozen scripts that I wrote have been performed as well. I established Bening in 1990 as an alternative to university-based theatrical companies to focus on women’s issues with an Islamic viewpoint. Due to my long involvement, I was invited to teach drama at the University of Jakarta in 2004. Now, I am an active lecturer and theatrical coach there, while pursuing my PhD.

With your involvement in Jakarta Arts Council, South East Asian Literary Council and the Indonesian chapter of the Muslim World Writers Association, how have you brought women’s changing cultural roles to the forefront?
I believe that women play a crucial role in society, including cultural changes. There is a phrase I like:  “Woman is the pole of the nation and every mother is the school for her children.” With each organization and event, I translate this belief by encouraging women and children to read and write for their betterment with various campaigns, trainings and publications.

In news stories around the world, you have been hailed for your focus on human rights abuses against women in conflict zones and called a “pioneer” and “the locomotive of young Indonesian writers. ” What is on the horizon for you now?
I have had some of my works translated into English and other languages. I would love to see more of them translated for a wider audience. I am keen to write more, to share and spread the messages of God’s love to human beings as taught in my religion. For me, writing is loving, writing is fighting; hence there will be no end to it. I pray that God gives me the strength to keep writing until my last breath.