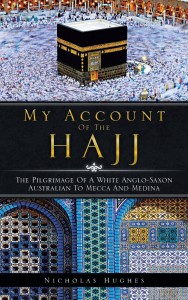 I first met Nick Hughes at the turn of this year at a book launch and got chatting to him afterwards over a few Bintangs. I’d already learned that he was a retiree from a life with international NGOs in South and Southeast Asia, mainly the Food and Agriculture Organization of the United Nations. I knew too that he loves climbing Indonesia’s peaks with both Gunung Bagging and Java Lava.

After the folk involved in the book launch had left for a more formal occasion, Nick and I began talking about spiritual journeys. I knew from experience that sitting silent atop of an inactive volcano watching the sun rise can give one a deep insight into our insignificance in the true scale of the universe, and that in an urban environment such moments are rare and ephemeral.

It is being in the moment that is important to me: the gaze with naked eyes into a vast cloudless starlit sky, a musician dragging us into the depths of his or her soul, or the gasps of, “Oh, I say”, as Murray or Djokovic rake sublime shots past each other. Perhaps this awe inspires fear, the knowing that we are truly insignificant in the scale of the universe.

When Nick sent me a review copy of his recently published ‘diary’ of The pilgrimage of a white Anglo-Saxon Australian to Mecca and Medina, which he undertook with his wife and daughter in 1992, I wrote to him that, as outlined above, my approach would be one of curiosity and with ‘a personal spirituality’ rather than being a follower of a particular creed.

His journey, he told me, “… was initially one of curiosity, then participation, and finally, a search for understanding leading to spirituality and deeper faith in an Almighty “. More importantly, I have focused on the spiritual dimensions of the Hajj without seeking, in any way, to proselytize/espouse the merits of Islam as a religion. My hope is that Westerners might better understand the rites of the Hajj through the eyes of a “White Anglo- Saxon Australian”, leading to greater intercultural and religious understanding.

“It’s an on-going process. Creeds are the least of my concern; I think you will sense this from the text.” And indeed I do. My school years were spent in the then predominantly Christian white surroundings of South London, the other side of the world from Nick. My ‘heroes’ of the time included Richard the Lionheart and Robin Hood, who defended what we English were taught were our rights.

My knowledge of Islam was therefore limited to the Crusades which, for about two hundred years from 1095, had the stated goal of restoring Christian access to the holy places in and near Jerusalem, as well as stamping out all traces of paganism and polytheism, which survives here as animism. This struggle between Christianity and Islam continues to this day, although the battlefields in the ‘War on Terror’ are now worldwide, as the recently leaked Prism documents and occasional terror attacks here in Indonesia make clear.

Nick says in his Introductory Comments to the extensive bibliography, “Early Western scholars focussed more on the historical aspects of Islam. … Personal accounts of travellers to Mecca, such as Sir Richard Burton (1821-1890), have added some understanding of the Hajj in the West but little to its religious and spiritual aspects.” And this is where Nick’s account of his journey proves of immense value. Each step of the way, each ritual arouses “a deep sense of empathy among the vast community seeking affinity with the Almighty.” That vast community he speaks of numbered about two million, an immense logistical exercise. Fortunately, his diary, the core of this book, has “provided a basis for … further enquiry and learning [which] continues to inspire a sense of spirituality and a deeper faith in the Almighty”. Other pilgrims seeking their spiritual core in Islam, which literally means “submission to God”, or, indeed, in other religions, would do well to seek out this modest book.

Each country is granted an annual quota of pilgrims by the Saudi government. In 1992, Nick and his family were three among 107,000. Last year there were some 221,000 Indonesian pilgrims, a number that has been reduced by 40,000 this year because the construction of a mall and some hotels for the well-healed around the Masjidil Haram area is still ongoing. The waiting list, already long at 12 years, will necessarily be longer. Given that Indonesia has the largest population of Muslims in the world, the Ministry of Religious Affairs which is in overall charge of making arrangements for the Hajj is currently appealing the decision.

Your Next Trip: Flores