In Quantum mechanics, water forms nice shapes for nice words and bad shapes for bad words. Our thoughts shape the world and our words can change the world.

“All we are is the result of our thoughts.” – Buddha

The UWRF’s International poetry slam more than met all expectations. Betel Nut Café was crowded with a diverse array of writers and readers from all over the world. More than thirty poets performed their work. The venue was packed by 7pm by the cheerful, supportive audience whose patience endured throughout the evening despite the sudden blast of music from Café Luna after intermission that continued until the end of the event. The din of dance music interrupted and muted the flow of words; but the poets maintained their rhythm and slammed on.

The event was MC’d by hip hop artist Luka Lesson, current Australian Poetry Slam Champion and co-director of The Centre for Poetics and Justice in Melbourne. He not only carried the show with professional grace but later thrilled the audience with a strong delivery of his powerful poems.

The judges ranged from readers to the audience to professional writers such as Lemn Sissay of the UK, whose poem Spark Catchers was commissioned by the 2012 Olympics. He also curated the world’s first Literature Festival of the Sea. Mr. Sissay initially shocked the audience with his low scores, as though his standards were far above the heights of Ubud. He then delivered a speech of gratitude and respect to all the participants, followed by his own work. His spoken words staccatoed into a torrent of admissions and truths. We were impressed. He gave his highest score to the winning writer. 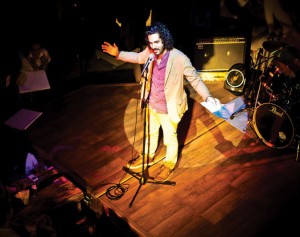 Tah Riq delivered two strong poems with a gifted presentation of talent and potential. Last year’s winner, Pablo Gentile, whose delivery was almost completely drowned out by the music next door, instilled a long, pained hush when his last words to O’ Obama rang out as the music came to a halt. “You’re just another politician!” The silence was deafening. Clearly there were no anarchists in the room.

Lesson’s many years of working with marginalized youth paid off as the final results had to be read out again, rock music blared and the room was stifling. He brought order to the chaos and final judgement was reached.

Neal Hall of the USA and author of the award winning book Nigger for Life apologized for a brilliant delivery saying he had not previously participated in poetry slams. His words are reminiscent of the late Langston Hughes, charged with humility and strength; tinged with the anger of  Soul on Ice by Eldridge Cleaver, both great influences on the American Civil Rights Movement. His first poem was a heartfelt response to the ferocious abuse his ancestral lineage of slaves endured, focusing on the endurance and suffering of the women in particular. He laments the complete loss of connections to the traditions and cultures of a shared past. His second poem was a summation of current events using phrases and rhythms from the Star Spangled Banner and the Pledge of Allegiance. A brilliant performance because he did not perform, he read his work. His words spoke for themselves and truth lingered in the air.

The power of thoughts and words…