Meet Pablo Gentile. A gutsy American artist who moved to Bali in the 80s to breathe art and live within this island’s culture. 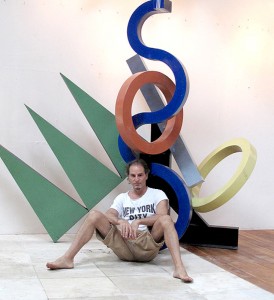 You are known as being one of the successful artists based in Bali appearing in collections worldwide. How did you happen to develop as an artist based here?

Well, I was a student at New York School of Visual Arts and after graduating, I travelled extensively throughout Europe, Africa, the Middle East, the Orient and Southeast Asia. I had been to Bali briefly in 1973 and never really got over it. I always kept sketchbooks and journals. When I returned in the 80’s from a little grass shack on the beach I began developing these ideas into finished works.

Bali has a tradition of attracting foreign artists for over a century. Aside from the obvious exotic beauty, and mystical aspects of an elaborate culture, from an artist’s standpoint a lot of the attraction was the magical golden light it was bathed in. The morning light was golden and thick, the way it filtered in through the foliage was magical. You can feel it in some of the works of Le Mayeur and others painting here around the 1930’s and 40’s. Most of it was focused around Sanur and Ubud.

What is the major difference in working in Bali now as compared to when you returned here in the early 80’s?

The type of traveller has changed since it developed and made the airport international.  Before that it wasn’t so easy getting here and mass tourism was a long way off. There were a lot of interesting people living here in the 70s and early 80s; adventurers, travellers, celebrities, writers, artists, designers, desperadoes, vagabonds, and surfers. For tourists, it was really about cultural tourism, which is still the island’s major attraction and what sets the place apart from the countless island paradises Indonesia has to offer.

It was impossible to be insulated here, you had to eat the local food, and in most cases with your fingers. There were very few places with electricity, no TV, telephones, or air conditioning. Hot water and mosquito nets were considered luxuries, and it was a long way to go for a decent margarita. To set up a studio in Bali, you needed to be prepared to sacrifice many basic comforts and be cut off from the “real world”. Working at night was difficult under dim lights, sporadic and weak electricity, if any, and buzzing mosquitoes.

Getting books was difficult and they were carried in, treasured, read and passed around. Those of us who lived here created everything we needed; our own entertainment; theatrical events were staged, everyone did their part, we had music jams and concerts, we made our own clothes, houses, and everything that went in them. We were interested in the Balinese culture and it was part of our daily lives. Parties were free and open; not a business. The type of traveller has changed. We actually came here to live within the culture. To us the greatest luxury was the simplicity of our lives here within the complexity of an ancient culture.

How does your relationship with the island affect the commissions and works you are able to achieve internationally?

Basically my paintings are the same methods and subject matter I would be doing anywhere. In my heart I’m still an American artist, and I guess that’s my vantage point. Certain major commissions, for example working with Universal Studios, I was able to turn my large-scale drawings into monumental works of stone-carved reliefs. This could never have been possible without the amazing skills of the Balinese craftsmen who have been carving stone throughout generations. The relationship between artist and craftsman in these works involves the carvers following my hand exactly, by carving through the exact scale contour drawings that I make. So the creative stuff never leaves my hands.

Tell me about your current work. What would you say is the feeling and inspiration behind the pieces?

I guess its return to my old graffiti and comic book roots, not really much to do with Bali specifically. I’ve been exhibiting and spending more time in the States lately, and I’m still interested in the idea of mobility through various cultures and philosophies and see my work as a means of understanding how those conditions interrelate. It’s important to recognize our shared past and our relationship to our ancient ancestors. There are various tribal elements that somehow keep jumping in, but there are no such tribes.

Besides being a visual artist you are a musician and a writer. There is an elemental force, which permeates all your works, a thread of synchronicity, an urban element.

I like keeping things out of balance and edgy and find most symmetry bland and one-dimensional. My roots are urban.

Being based in Bali, do you find it easier to concentrate in this environment?

I was raised one of four kids in an apartment in New York City. In order to do my homework there was a lot to tune out just to concentrate. Even now I like to work with the TV on and the sound turned down, the music playing, my pets wandering around the studio, and various others, what some may call distractions actually provide me with a means of focusing. Chaos presents many dimensions, which reflect in my work. I worked in warehouses in NYC, so I built a loft here using the same proportions but using traditional materials. 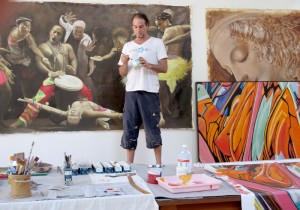 I remember you were the first to actually create a NY style loft here. So now tell me about your writing?

I always kept sketchbooks and journals. I used to write lyrics for music or throw them into the mix while jamming. A friend encouraged me to enter a poem to the Ubud Writers and Readers Festival Poetry Slam last year and to my surprise I took first prize. This year there were some good participants in the Poetry Slam. The right man won, he was great! This prompted me to start taking it a little more seriously, so I’m still working on my second book, currently titled, “The Revenge of the Chainsaw Buddha”. It’s a collection of short stories and poetry, and drawings made during my over 30 years of travel throughout the world.

Which artists do you most admire?

I admire anyone who has the balls to do this for a living.