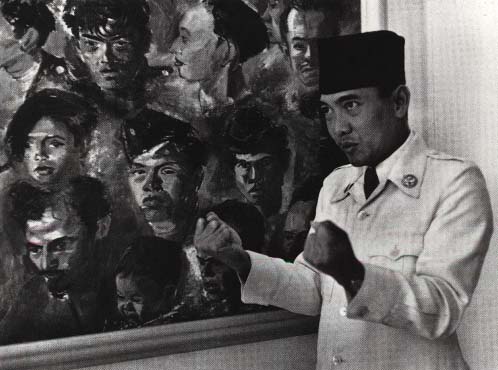 The Father of Indonesia, first President Sukarno, understood well the necessity of creating a truly Indonesian art movement to forge a national identity that transcended religious, ethnic and linguistic divisions that plagued the archipelago. To do this he gathered around him a circle of young and talented artists. One of the most significant of these was S. Sudjojono, one of key founders of Persagi (1938-1943), which along with his many other accomplishments would lead the art critic Trisno Sumardjo to declare him the “Father of Modern Art in Indonesia” in 1949.

Born in Medan, Sumatra to a family of poor Javanese migrant workers, S. Sudjojono, stumbled upon greatness as the result of serendipity and pure talent. This would begin in 1925 when an admiring art teacher sent him to Jakarta. There he would gain an intimate glimpse into the prestigious Batavian Art Circle, which featured exhibitions of the Beautiful Indies School as well as often-revolutionary contemporary European art. In the process he would also be introduced to many of Indonesia’s now most famous modern artists including Affandi and Hendra Gunawan who were also founding members of Persagi.

In 1947 Sudjojono would present perhaps the most poignant depiction of the Indonesian Independence Struggle – a large oil on canvas entitled “Revolutionary Comrades” (Kawan-kawan Revolusi).  Unlike many paintings in the revolutionary genre, “Comrades” makes an attempt to glorify or beautify the subject. Its ultimate nobility is mirrored in its dark and moody honesty. Here we see the grimy and tired faces of Indonesian men and women from all walks of life staring out with courage and fortitude seemingly remembering fallen comrades, lost youth and even more challenges to come.

While the founding of the Republic of Indonesia ended more than 300 years of foreign domination and oppression, the struggle to bring prosperity, equality and justice remained elusive. As many artists of his era S. Sudjojono manifested his concerns for the welfare of the common people in paintings of peasants and working people. In the 1970s he would begin exploring more surrealistic subjects that often suggested alienation and disappointed with the Brave New World that never appeared.

His revolutionary credentials were acknowledged in his selection to paint a huge mural in Museum Fatahillah depicting the struggle of Sultan Agung of Mataram (ruled 1613-1646) against Jan Pieterszoons Coen (1587-1629), the dour and stern founder of the VOC or Dutch East Indies Company. Ironically painting is located in the Dutch City Hall where Coen sat when Sultan Agung unsuccessfully laid siege to the city in 1628. Late victories are often the sweetest.

In 1985 S. Sudjojono would mount his last exhibition in the Ancol Art Gallery along with Affandi and Basoeki Abdullah. He would pass away in September the following year. In the last phase of his life he largely abandoned the distinctively anti-aesthetic style of his youth. The most probable cause was love which can time even the wildest revolutionary. Today he is honoured for a seminal role in Indonesian art and history not for his still lives of flowers but rather his revolutionary vigour and vision – Merdeka!

Not Just Another Fancy VUE