Joseph Conrad (1857 – 1924) was the most successful ESL/EFL/ESOL student of all time. A Pole by birth, he did not speak English until he was in his twenties, but in spite of this went on to become one of the very greatest of English novelists (so let that be an inspiration to all you students of English). He became an officer in the British Merchant Marine, earning his Master’s ticket. Then, at the age of 36, he left the sea to become a fulltime writer. 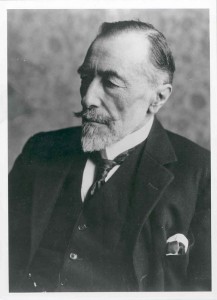 During his sea career he made several voyages in Indonesian waters, including trading journeys in the Vidar from Singapore to Kalimantan/Borneo, where he spent some time at Berau in East Kalimantan. This became the setting for several classic novels and stories, including his first two novels, Almayer’s Folly (1895) and An Outcast of the Islands (1896), both based on real people and events. Almayer is a Dutch trader whose dream of leaving his remote jungle outpost to take his daughter triumphantly to Europe is thwarted by her eloping with a Balinese prince. Willems, the “Outcast”, is the ultimate troppo-happy loser, whose passion for the native girl Aissa leads him to betray Almayer by “letting the Arabs into the river.” Carol Reed made a powerful movie of this tale in 1952. I saw it as a boy, and it got me “drunk on Conrad.”

Berau became “Patusan” in Lord Jim (1900), the Hamlet of the English novel. And like Hamlet, Lord Jim is the story of a young man whose over-sensitivity and imagination mesmerizes him from taking decisive action at critical moments. As first mate on the Patna, he abandons a shipload of pilgrims in the Red Sea, is tried, cashiered, and drifts east from port to port to try and escape the stigma of cowardice. He finally redeems himself in the jungles of Kalimantan, but has to accept death because of a promise made to the Bugis chief Doramin, whose own son has been betrayed and killed by “Gentleman” Brown and his gang.

The first part of the book is based on fact. The real-life counterpart of Jim, Austine Williams, settled down and married in Singapore after the scandal. Apparently his friends in Singapore were not happy with Conrad raking up his story. In his In Search of Conrad (1991), Gavin Young describes how he tracks down Williams’ grave in a cemetery in Singapore threatened with demolition, from where Williams’ last living son has now rescued his father’s remains. Lord Jim was made into an epic movie in 1965 with a stellar cast, including Peter O’Toole, fresh from playing Lawrence of Arabia, as Jim, Jack Hawkins as Captain Marlow, Eli Wallach and James Mason as the baddies, and the bosomy Israeli actress Dahlia Lavi as the native girl Jewel. It’s enjoyable, if overlong, and was filmed in Cambodia, around the iconic temples of Angkor Wat. Just like Apocalypse Now, which was itself based, unacknowledged, on Conrad’s Heart of Darkness.

In the autobiographical story Youth (1898), Conrad romanticizes his first landfall in the East, setting it in Java, although it was actually Muntok in Bangka.

“…suddenly a puff of wind, a puff faint and tepid and laden with strange odors of blossoms, of aromatic wood, comes out of the still night–the first sigh of the East on my face. That I can never forget. It was impalpable and enslaving, like a charm, like a whispered promise of mysterious delight.”

I’m sure that this sensation can still be experienced all over the islands, but for many it’s more likely to be the smell of petrol and kretek cigarettes on arrival at Sukarno-Hatta.

Another story, Freya of the Seven Isles (1912), in which Freya’s suitor loses his beloved ship to an unpleasant Dutch rival, is so heartbreaking as to be almost unreadable. Conrad is never a barrel of laughs and never an easy read. The reaction of Sekolah Cita Buana High Schoolers, on studying Heart of Darkness, was “the horror, the horror !” Probably the only story which can be satisfactorily read with school children is The Lagoon (1897). Its slow dreamlike trip up a Kalimantan river contains a story within a story of melodramatic passion and violent betrayal, then fulfills the symmetry by returning to the lagoon, ending as the Malay protagonist “…looked beyond the great light of a cloudless day into the darkness of a world of illusions.”

Conrad’s tendency to personalize the mood of the river and the jungle, simultaneously indifferent and threatening, was mercilessly parodied by Max Beerbohm in A Christmas Garland (1912). Here is a sample. “Down below, by force of habit, the lush herbage went through the farce of growth – that farce old and screaming, whose trite end is decomposition. Within the hut the form of the white man…was covered with a mosquito net which was illusory like everything else, only more so.”

Karain (1897) is longer than The Lagoon, and expands its themes. Surely this is the Conrad story now most suitable for filming. Interestingly, here is the opinion of colonial Java that Conrad puts into the mouth of the Bugis chieftain Karain. “Is there anything good in that country? The paths run straight and hard and dusty. Stone campongs, full of white faces, are surrounded by fertile fields, but every man you meet is a slave. The rulers live under the edge of a foreign sword.” Finally we come to The Rescue (1920), which, like Almayer and Outcast, features the quixotic buccaneering “Raja Laut”, Captain Tom Lingard, who was also based on a real character. Another heart-rending Conrad tragedy. Lingard chooses to rescue the unpleasant husband of a sophisticated English lady, Mrs Travers, with whom he falls in love, and by doing so betrays his Malay friends, Hassim and his warrior sister Immada, who had saved his life years before. Here we have Mrs Travers and Immada looking at each other, “…the beginning and the end, the flower and the leaf, the phrase and the cry.”

Which one would you choose?