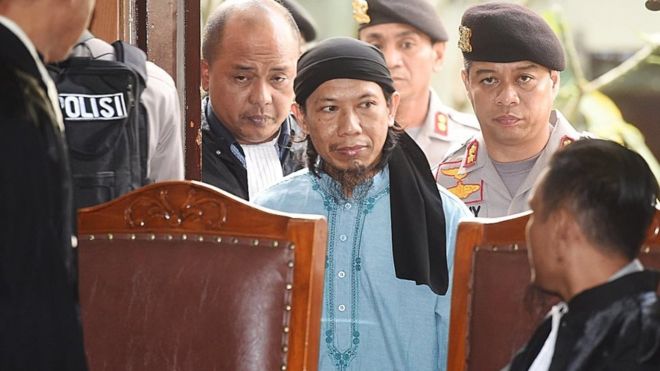 Radical cleric Aman Abdurrahman was sentenced to death on Friday, June 22, for his role in inciting others to commit terror attacks in Indonesia.

The five-judge panel ruled that the 46-year-old had planned and incited others to commit terror acts.

“The defendant has either met his followers face to face or distributed his write-ups widely on the internet, MP3 clips as well as (live) audio calls,” presiding judge Akhmad Jaini told the courtroom.

The panel cited an expert’s views at the trial that a terror attack is part of a set of actions that include contemplating and planning the attack, and that everyone involved must be held responsible.

Prosecutors had sought the death sentence for Aman, who had been charged with inciting various terror attacks, including a gun and suicide-bomb attack in Jakarta in 2016 that left four bystanders dead.

Aman is the spiritual leader of local extremist network Jamaah Ansharut Daulah (JAD), and is considered the de facto head of all ISIS supporters in Indonesia. Authorities said JAD was behind the 2016 attack and a wave of suicide bombings in Indonesia’s second-biggest city Surabaya last month.

Although some of the perpetrators of the various attacks had never met Aman, they read his views online and were inspired to launch the terror attacks, prosecutors had said.

Aman’s lawyer Asluddin Hatjani said he would discuss with his client whether to appeal the verdict.