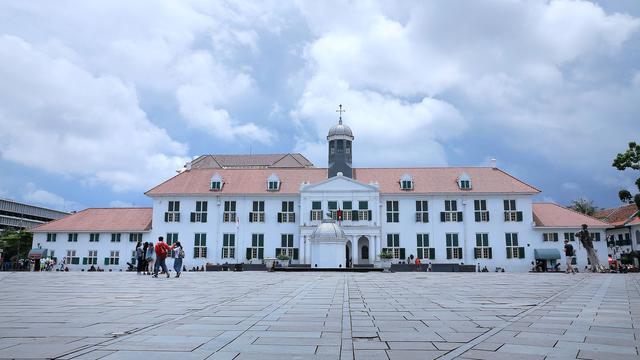 Jakarta is not just high-rise buildings and malls. The capital city is home to a multitude of grand buildings with genius architecture, whether new or ancient.

One such area is the famous ‘Kota Tua’, translated to Old Town in English. With its heart located 200 metres within reach of transportation in Fatahilah Garden, the building once served as the core of the spice trading industry and gained economic plaudits internationally as one of the first physical settlements of the Dutch colonisers. The area was once anonymously said to “Stand quaintly amidst shabby villages and plain rice fields”.

As the white walls stood high in its symmetrical creases and curves, its polished darkened-coral roof tiles glinted under the sun, the distinctive smell of cinnamon and other popular spices wafting alluringly, slowly dissipated as more buildings were built around the area. They range from museums such as the educational Wayang Museum to stores and food places – Cafe Batavia and Red Store, to name just a couple.

Also going by the name Old Batavia, this area of Jakarta holds an atmosphere of unbreakable, antique history, preserved for its architectural art. It is certainly no questionable mystery how it has earned the title of the “Jewel of Asia”, considering it was such a busy and lively area in the olden days; only abandoned in the late 18th century due to the location being near water bodies.

Due to the warm climate, the atmosphere became humid, causing spices to spoil easier as well as the surge in diseases such as malaria. Even then, Kota Tua is still a historical relic cherished by all. Hence, many visitors from all over the globe have come to wander and marvel at its beauty, facilitated by its supporting landmarks.

Despite the grand structures, like all other buildings, age always catches up with quality. This is why acts of repair and restoration have been taken in order to preserve Kota Tua’s buildings. The initiative was sparked in 2005 and was hence carried out and continuously worked to improve the area up to 2014. Even other governments, such as the Netherlands, took part in the scheme.

With its width stretching up to 1.3 square kilometres from north to west Jakarta, it is very popular for tourism. Do take time to explore Kota Tua.

First and foremost, wear something comfortable and not too thick – there are still air-conditioned rooms and shady areas, but the location, being in a tropical country, means the lovely sun might be a tad too warm for some people.

Secondly, plan what you want to do. Would you prefer the fine outdoors, or feasting your eyes on preserved pieces of old history? If it is the latter, then do visit the multitudinous museums available in Fatahilah Square. There are museums featuring fine arts crafted from china and ceramics, to those exhibiting unique forms of old furniture – all for an entrance price of less than Rp5k per person.

However, if you would like a more organised tour, one is available. You can rent bicycles and go around the area under the guidance of the staff. You will be taken to breathtaking monuments and towers such as Menara Syahbandar, spectacular bridges like the famous Jembatan Kota Intan, and much more; a fun yet informative trip is definitely guaranteed.

After all this walking and shopping at local stores hosting trinkets, what do I do, I hear you ask? Well, not only is Kota Tua is a place of tourism and antiquities, it is also the home to a vast variety of culinary fayres. You can get anything from snacks harking back to the Dutch ages up to modern food, such as steak and dimsum, prepared just with a sprinkle of local modifications.

Kota Tua seems to just be a patch of land holding a dull sense of mediocrity, but as you dig into its history, jewels, and concealed details will start to make their ways to the cloudy surface, making each and everyone’s perception gradually change for the better.

What are you waiting for? Grab a camera, and hop right in; snap those fun photos and be the centre of everyone’s envy when you share photographs of such beautiful living pieces of property art.

Why Bitcoin Is Popular with Indonesians