Lush hills and steep cliffs overlooking lively villages and cerulean coasts adorn the winding roads of Flores from one corner to the other. While I’ve been to my share of Indonesian islands I’ve called beautiful, I have to say that there is something special about Flores.

Despite Flores’s increasing popularity as a touristic destination, it still offers many off-the-beaten-path encounters. The peoples of Flores enjoy life as it is; refraining from the vices of excess, celebrating life values through creative expressions, and generously welcoming visitors from afar. Moreover, Flores is perhaps the Indonesian island where I’ve felt the safest as a solo backpacker.

Our first stop in Flores was Roë, the village in which Nila Tanzil’s first Taman Bacaan Pelangi (Jakarta Expat issue 99) was founded. It was a rainy Wednesday afternoon, but about 50 kids ages eight to 12 braved the weather to meet us at the school which manages the library.

The children seemed excited about getting visitors from Jakarta. Most of them have never travelled outside Flores. They seemed to find it a treat to be able to look at pictures of Java, Papua, and Sulawesi from my laptop screen, and asked us many questions about our families and jobs. It was amusing to watch my travel companion Tino try to explain to them what a computer programmer does.

We also listened as the children told us about life in Roë. Many of them help their parents run the family farm or plantation, but still attend school with an enthusiastic learning spirit. A number of them make talented singers and poets too. Later that evening, our hosts slaughtered a chicken for us and cooked us traditional Manggarai dishes.

Our next stop was Wae Rebo, a restricted highland village famous for its conical straw houses. Being frugal, we took an oto kayu (a modified truck that resembles an open-air bus with wooden seats) to Dintor. With speakers booming with sappy Eastern Indonesian ballads, the four-hour ride through narrow serpentine roads, mountain jungles and valley villages, made for an adventure in itself. Dintor, a fisherman’s village on the south coast of Flores, is where our Wae Rebo hosts (or their semi-modern alter egos) live. We spent the afternoon walking through the ricefields and sitting on the shores of the white rock beach overlooking Pulau Mules. Our arrival coincided with a special ceremony officiating the renovation of a rumah adat in Wae Rebo the next morning, so we left Dintor at 3.30am in order to make it to Wae Rebo on foot by 8am.

Wae Rebo’s sacred aura, I believe, has little to do with the peculiar traditional fashion, architecture, or music. It has more to do with the respect this contemporary community pays to their land and the values their ancestors taught them, and their assertive expectations that visitors do the same.

Our next stop was Ruteng, where we visited Liang Bua, a cave where ancient hominids lived. Homo floresiensis, also known as the “Flores hobbit”, was a species of short humans that were believed to be fast runners and able speakers. We spent time with a local old man who claims to be a descendant of the hobbit.

Tino and I travelled back to Labuan Bajo and parted there as he caught a flight back to Jakarta. After spending that afternoon at the tranquil Danau Sano Nggoang with the friendly locals, I tried my luck the next day hitching a cheap ride to Komodo National Park. I ended up in a boat to Rinca with a middle-aged couple from Riau.

The journey to Rinca was one gliding on emerald seascapes, with a myriad of lush islands in sight. There we spotted a band of the famous Komodo dragon, watched some nests, and went for a short trek – which I found too short but the Mrs. found exhausting. We then went for a snorkel at Pulau Kelor, which unfortunately has a miserable underwater view of dead bleached coral. 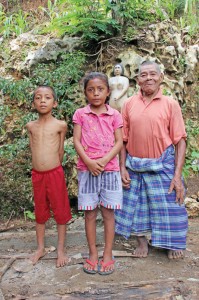 I finally headed eastbound once more and visited Bena, a village near Bajawa that is also famous for the distinctive rumah adat. Legend has it that the ancestors of Bena came from Java, and they prayed to their ancestors by plating offerings on the megalithic altars, hence the name Ba-Jawa – plate from Java.

The local architecture is embedded with philosophies of life, procreation, and the struggle to survive. The landscapes are surrounded by lush mountains looking out to the coast.

My next stop was Ende – a beautiful coastal town laced with black-sand beaches and mountain views, where Sukarno spent some time in exile. Unfortunately every historical site there seemed to be closed for stupid reasons – the guardian of Sukarno’s house didn’t feel like working, and the theatre where the former president wrote plays had wild plants growing all over it.

When the road from Ende to Kelimutu collapsed the next day, I wish I had gone to Riung on the north coast instead. To get to Maumere I had to detour via Mbay up north – an hour’s drive from Riung – but couldn’t visit the famous white sand beach because the bus leaving for Maumere via the north coast hell road left at dawn.

In Nita, a village south of Maumere, I spent a night at Sentra Tenun Ikat Lepo Lorun. There I was greeted by the ladies who were busy making bolo plagar – riceflour cookies made in the shape of Maumere textile patterns, taught from mothers to daughters to someday make for the man who asks for their hand in marriage.

Alfonsa Horeng, the internationally reputed leader of STILL, took me on a personal tour through her gardens, showing me the plants from which her textile’s fibres and colours come. One of her weavers demonstrated the fermentation of indigo and the spinning of cotton threads. We had a lively conversation on the role of tenun ikat textiles in keeping community values alive, and compared the value of Flores’s traditional agricultural-based economy to the modern money-oriented economy.

My visit to the tricolour lakes Kelimutu the next day didn’t turn out very auspicious as thick mist descended over the view. But perhaps that’s only a sign that I should return here someday. After all, the lakes’ colours change like a chameleon’s coat – they won’t be the same lakes on my next visit.

I finished my trip in Maumere with a Christmas Eve mass in Katedral St. Yoseph and a White Christmas morning. No, it wasn’t snowing – just very bad rain that covered this coastal city with bad fog.

An alternative universe where the ancient and the modern coexist, the lair of the dragon, hobbits in a cave, commoners wearing woven robes fit for royals embedded with secret messages, and mysterious lakes that change colours – these might as well have been written in an exotic oriental fairytale. But in the enchanted island of Flores, I witnessed these tales as real life. And sharing part of them with a fellow adventurer who stole my heart only multiplies the joy of the journey manifolds.

How to get there

What to bring
Sunscreen, a hat, snorkelling and diving gear, hiking shoes.