Any discourse on the rivers of Indonesia owes a great debt to Kalimantan. The world’s third-largest island is home to three of the longest rivers in Indonesia: the Kapuas (West Kalimantan), the Mahakam (East Kalimantan) and the Barito (South Kalimantan). No wonder Kalimantan’s people rely heavily on the abundance of waterways, both as a means of transport and a source of livelihood.

Recently I visited South Kalimantan province to explore the wonders of the Lok Baintan Floating Market in Banjar Regency, as well as the beautiful scenery in the heights of the Maratus Mountains in Loksado District.

The beauty of these places would be nothing without the existence of the rivers and the lifeblood they provide.

A ‘floating’ market is a market held on a river or waterway, usually using traditional boats. This type of market is also found in neighbouring countries such as Thailand and Vietnam. In Indonesia the most prominent, authentic floating markets are the Muara Kuin, downstream of the Kuin River in Banjarmasin, and the Lok Baintan on the Martapura River in Banjar. Both are in South Kalimantan province. It is a privilege to witness this ancient trade in action, as it dates back to the reign of the Banjar Sultanate (c.1520). Modernisation threatens its future, though on my visit I heard the local government is now willing to make the effort to support and preserve the tradition. 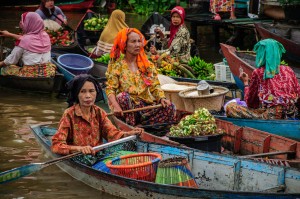 The Lok Baintan Floating Market is usually held from just after dawn until the boats disperse mid-morning. The traders are mostly women offering goods to anyone on the river, including tourists in modern motor boats. The traders approach in their klotok (traditional boats) and hawk their goods, ranging from fruits, such as rambutans, bananas, guavas and oranges, to vegetables like cassava leaves, water spinach and cauliflowers, to traditional snacks. There are also ready-made meals to go, such as nasi bungkus (wrapped-up rice with side dishes). Prices start from as little as Rp.5,000 for a small bundle of pink, spiky rambutan. Bargaining is widely practised.

What I found most intriguing were the countless exotic fruits on sale, including some rarely seen or sold in big cities nowadays. One example is the Kalimantan mango or kasturi (Mangifera casturi) which is on the International Union for Conservation of Nature (IUCN) Red List of Threatened Species. It tastes similar to an ordinary mango, but softer and with less flesh. Others are the rambai (Baccaurea motleyana), a bit like longan and similar to another rare fruit, the menteng. There is also duku fruit, known as langsat or lanzones, the latter of which is more common in Indonesia.

Chaos is perhaps one’s initial impression of the Lok Baintan Floating Market. It can seem haphazard, with nudges and bumps between boats often occurring. But observe closely and you’ll see it is actually very orderly and tolerant. In this market the traders respect one another: the bumps are inevitable and indeed necessary for them to communicate and even to trade with one another. Uniquely, they often do not use money for trade, but instead do business by barter system; trading one item for another.

After traversing the Lok Baintan Floating Market shortly before closing time, I tasted one of Banjar’s culinary wonders, Soto Banjar. The common soto is found all over Indonesia and is usually composed of broth, meat and vegetables. This one was in a traditionally Banjarese style: shredded chicken, egg, potatoes and carrots, served with lontong (packed rice in leaves).

From my hotel in Banjarmasin I headed out to Loksado, around four hours away. Loksado District is in the Hulu Sungai Selatan Regency. The route from Banjarmasin was via Martapura, Rantau, Kandangan and on to Loksado. Martapura is a producer of diamonds and other valuable mineral rocks, but it is also the centre for clerical Muslim schools in Kalimantan. Leaving Martapura I encountered Rantau, a producer of coal, passing several mines and large trucks. After Kandangan the road started to escalate in twist and turns: the start of the road to Loksado, up in the highlands of the Maratus Mountains and home to the Dayak Maratus tribes. 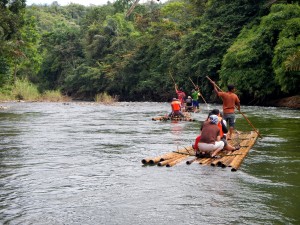 Arriving at the Mountain Maratus Resort late at night, I slept and prepared for an early start. The hotel’s modest yet relaxing rooms sit amid natural surroundings of rivers and mountains. The environment is pristinely preserved; it would perfectly suit those who crave a peaceful vacation – but don’t miss out on wading the Amandit River in a bamboo-constructed raft.

Rafting here is different to the usual safety get-ups and high-tech boats found elsewhere. These are simply plain yet sturdy bamboo logs tied together into a long raft. It may look frightening at first but it is actually pretty stable! It helps that the rapids in the Amandit River are not as strong as others used for more heavy-duty rafting. Indeed you don’t get too wet – perhaps just from the waist down. The journey was about 90 minutes with stops for picking local fruits from trees along the riverbanks.

Visiting the Lok Baintan Floating Market and then partaking in Loksado’s bamboo rafting are unique experiences, but still relaxed and not too tiring. Perfect for a quick getaway or weekend trip.

A Day Trip to Mauk

South Solok: a Place with One Thousand Rumah Gadang