Nearly half a millennium before the world, slowly getting connected by grainy black and white TV images, was entranced by antics of Yuri Gagarin, Neil Armstrong and various cute animals in astronaut outfits there was another race that captured peoples’ attention.

Instead of the moon though and the vanity of nations, it was spices and it was all about profit. Massive profits for tiny seeds.

As far as the Europeans were concerned, spices were inordinately expensive and they blamed the Venetians. They knew the commodity came from somewhere in the east but that was it. Europe was coming out of the dark ages; to them, the east was the Ottoman Empire. Beyond that, their knowledge was scanty at best. In fact that lack of knowledge can be highlighted by the fact that Christopher Columbus set off looking to tap into the spice trade when he ‘discovered’ America by mistake!

They little knew that the spices themselves, nutmeg, clove and mace, began their journeys on tiny islands on the other side of the globe and were carried by a virtual cornucopia of nationalities before ending up in the finest houses and restaurants. They didn’t know that but they instinctively knew that if they did it themselves, the sourcing, the collection and the transportation, then wholesale prices would plummet and their profits would increase astronomically.

Towards the end of the 15th century, the race was on and the early frontrunners were Portugal and Spain, no doubt encouraged by a papal ruling that had conveniently, for them at least, carved with the globe into halves; the one half being awarded to Spain, the other to Portugal. Malaka was vital as it was from there, at a narrow point on the Malaka Straits, that all shipping could be checked, and most importantly, taxed.

Before the Europeans came on the scene the Straits was of great importance; all trade between Arabia, India and China had to pass through this stretch of water that separates the Malay Peninsula from the long, cigar shaped island of Sumatra.

With the Portuguese conquest of Malaka, then a middle ages Singapore, they could almost smell the aromatic spices carried on the trade winds and after consolidating their hold on the vital port they headed east and eventually set foot on the fabled islands.

But the Portuguese mastery of the trade was brief. At the end of the 16th century two other players emerged on the scene and for them, their goal was profit pure and simple. The Portuguese felt their work was done for the glory of God but the Dutch and the British, not bound by the dictates of Rome and the Holy Father, had no such scruples. And the profits were mindboggling.

After an initial Dutch sortie which had seen many of the crew die and left behind a succession of upset local potentates, a second, more serious venture, bought forward a return of 400% for the investors and launched a slew of copycat traders; by end of 1601 14 fleets had headed east looking to imitate that success. 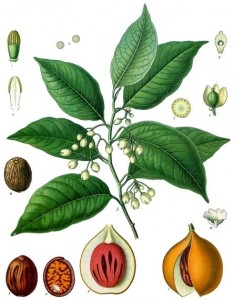 Towards the end of the 17th century the British and the Dutch were sitting on ever greater riches. A trader could purchase a 10 pound bag of nutmeg, the seed of the nutmeg tree, in the Banda Islands and pay less than one English penny. That same bag, on its arrival in London could then be sold for more than £2 10 shillings. A return of 60,000% that would have cleared any inner city of drug dealers in today’s world.

As men of greed themselves, the backers of these pioneer armadas trusted no one. The men captaining the fleets were strictly told they could not engage in any trade themselves and even the slightest discrepancy was viewed very seriously. Returning fleets would have their precious cargo guarded jealously from the cargo hold to the market place.

So what were these tiny seeds that sent men around the world, saw small wars exported round the globe and, ultimately, saw a tiny island in the middle of wide-open sea exchanged for a piece of real estate that eventually became New York?

Today if you sell a nutmeg it refers to the act of one footballer passing the ball between the legs of an opponent. About 1,300 years ago monks saw nutmeg as something they could add to their desserts for flavouring while the England of Queen Elizabeth 1 and William Shakespeare believed it could be used to ward off the plague, a frequent occurrence in those days. It has also reportedly been used as an intoxicant by a smorgasbord of people from Indonesia, to the USA via India.

Given the high cost of nutmeg in European markets it is little surprise they were seen as a status symbol and the well off would think nothing of going to the finest restaurants, sitting down then whipping out their nutmeg grater as ostentatiously as possible. Think Blackberry without worrying about charging the battery.

In a boon to those businessmen the reddish covering around the nutmeg seed, called mace, was also highly sought after for its culinary qualities.

Cloves also have a long and varied usage. One Chinese emperor demanded that anyone who wished to speak with his should first wash their mouth with clove to improve its odor! The Romans were also familiar with cloves, with one complaining the amount of money and resources that were expended annually to trade with India.

They are also a mainstay of Indian food with the spice added to a variety of dishes from the sub-continent while the idea of burning clove is one that has spread far with of course it being a popular ingredient in Indonesian cigarettes but also as an incense in both China and Japan.

As any free-market economist will tell you, a monopoly is not in the interests of the market place. The Dutch and British were not able to enjoy their massive profits for long. The need to protect their supply routes led to ever-increasing costs of security and it was never going to be long before some enterprising soul tried planting the seeds in similar environments far from the monopolist’s avarice. Today, for example, nutmeg is grown on the tiny Caribbean island of Grenada and such is its importance to the country’s economy, it is the second-largest producer in the world after Indonesia, it features on their flag.

Police Urge Motorcyclists not to wear Flip-flops When Driving