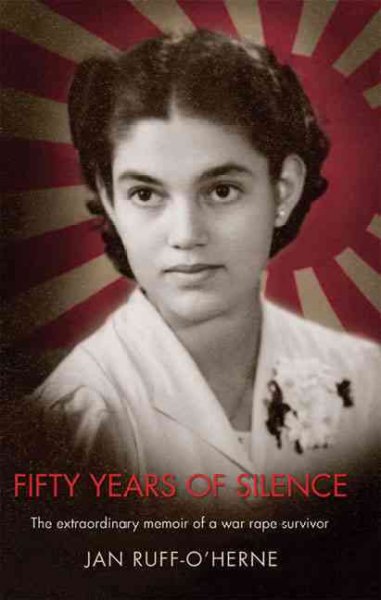 As job titles go it is difficult to think of any more crass, more cynical than ‘comfort woman’. To the uninitiated it conjures up images of fair maidens, perhaps with a flower in their hair, permanently white smile, pandering to the needs of a weary traveller perhaps in an airport lounge or at an upmarket club or hotel.

The reality is much different of course and it is a reality that a Dutch expat carried with her, buried deep within her soul for nearly 50 years before she could finally tell the world what being a ‘comfort woman’ meant to her. 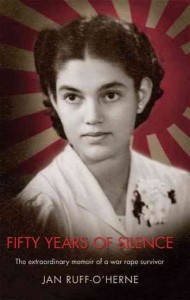 Jeanne O’Herne was born in 1923 and grew up on a sugar plantation near Semarang. In her book, 50 Years Of Silence – Comfort Woman Of Indonesia, she describes her childhood as ‘the most wonderful anyone could imagine.’

It was the life of privilege that a colonial master might expect. She recalled the smell of coils to keep mosquitoes away, the sounds of geckos and the affection shown to her by the local staff that did the chores for the family.

Weekends and holidays were spent in the cooler climes of Bangunan where her grandfather owned a resort and the family used to enjoy climbing the slopes, looking over the Gedung Songo, ancient Hindu temples that dotted the countryside.

There was a farm nearby as well, called Ampel Gading which they liked to visit. The Japanese farmer and his wife would always greet them warmly and treat the tired hikers to fresh milk from their cows. Little did Jeanne and her family know at the time but the farmer was a spy. A sleeper sent in to blend into the area and provide crucial information to military planners back in Japan hard at work developing their conquest of Southeast Asia.

The Second World War kicked off in far away from Europe but despite the Japanese sabre rattling and actions in China, many believed that they were far from harm’s reach. December 8th put paid to that careless attitude. While the Japanese had attacked Pearl Harbour in Hawaii, troops had also piled ashore along the Thai and Malaysian coast.

By the 15th February Singapore, the impregnable fortress had fallen. Indonesia, then known as the Dutch East Indies was pivotal to Japanese plans for that was where the natural resources were she desired for self-sufficiency.

Java was invaded on 1st March 1942 and fell on 8th. The idyllic days were over; gone forever as the Japanese army destroyed the myth of white man’s invincibility in just three months. The British and Dutch Empire sounded their last post in the face of the enemy’s onslaught and despite the stretched lines of communication paid the price for lack of forwarding planning and confusion among the ranks of decision makers who refused to believe any threat from Japan was real.

Who paid for that indecision soon became clear. The first enemy troops Jeanne and her family saw were the ones who came to register them. Soon after they returned with trucks and took them away to a new life at Camp 6 in nearby Ambarawa, they experienced a new life without maids, cooks or staff to clean up after them. Amid the squalor and disease they settled into their routine thinking this was as bad as things would get.

Two years later things were to get much worse for Jeanne.

She was emptying the sewage pits with buckets, throwing the overflowing human waste into a nearby stream when some trucks pulled up and a roll call was announced. But this was unlike any other roll call they had experienced previously.

Young girls aged 17 and over were the only ones called. Little did Jeanne know but a well connected Japanese major had decided to open a military brothel in Semarang. A license had been applied for and approved in Batavia dictating that the girls who worked in the brothel were volunteers who had signed a statement to the effect that they were indeed volunteering. According to the terms of the license, the girls were also entitled to regular medical check-ups and payment.

The camp leaders protested. Some girls ran away, desperately trying to elude their fate. In front of grinning, salivating soldiers the girls were subjected to humiliating checks. Some were returned to their friends and family. Ten were not. Jeanne was one of the ten.

They drove into Semarang and Jeanne, along with half a dozen other girls, as made to get off at a colonial house now named The House of Seven Seas. In no uncertain terms, the girls were told they had to provide sexual services for Japanese officers. “We are your captors, we can do with you what we like,” they guffawed, excited at the thought of what was to come.

For three months Jeanne and her friends stayed there. Her only respite came when, through the help of one of the sympathetic Indonesian staff, she was able to get a letter out to her sister, Aline, who had remained at large thanks to her job with the railway.

Aline arranged for a Japanese friend of hers to ‘book’ Jeanne all night, every night. For two weeks she was able to escape the mauling, sweaty bodies of a conquering army but of course, it ended. It had to. The man concerned was being teased by his colleagues over the amount of time, and money, he was spending on a ‘prostitute’.

As per the terms of the license, regular medical check-ups were provided. But in Jeanne’s case, it meant one more rape; the doctor just one of many.

Towards the end of April, a colonel from Tokyo was visiting Java. He was responsible for the conditions in prisoner of war camps. At Ambarawa 9 a camp leader was able to tell this colonel about her daughter who had been taken away to a camp and of her suspicions. The officer from Tokyo made enquiries and soon after the Semarang brothels were closed and European women could no longer be used.

At the end of the month, the girls were taken from the brothel, no explanation was given, and put on a train. When they get off they were moved to Camp Paris near Bogor where the camp officials told them under no circumstances could they talk about their experiences in the Semarang brothel. There was no chance of that, the humiliation was too great.

They were kept in a sectioned off area of the camp along with other girls who had been similarly maltreated though at least Jeanne was able to be reunited with her mother. The inmates in the rest of the camp guessed at where the mysterious new girls had come from and jumped to the conclusion they had voluntarily offered their services adding more pain to the victims.

Those three months were to scar Jeanne for the next 48 years. After nearly 18 months in the camp in Bogor, the war ended but life didn’t return to normal as Indonesian freedom fighters were less than impressed by the Dutch desire to keep their colony. But when it was finally all over she moved to England and married an English soldier who had guarded the camp in Bogor. They had fallen in love, she told him what had been done to her in Semarang, he cried and they got married.

In 1992 she had emigrated to Australia. At that time Korean comfort women were pressing the Japanese government to admit, in the face of massive nationalist denial, that Japanese troops had forced women to work as sex slaves during the war. For Jeanne, watching it on TV, all the memories came flooding back. She hadn’t told her children what had happened yet but now, seeing others relive the horror she felt it was the time she faced her own demons down. She wanted to reach through the TV screen and hug those brave women.

She was invited to an International Public Hearing in Tokyo in December of that year, discussing war crimes and compensation. She felt this was her moment.

Before flying to Japan there was the small matter of confiding in her family. How to do that? How to tell your children and grandchildren that the 69-year-old woman they had known all their lives had spent three months being used as a sexual plaything by men in uniform? She knew she couldn’t do it. Not face to face. So she wrote it all down in a notebook and gave one copy to her daughter just as she was boarding a flight to Alice Springs. The daughter read the book and cried the whole journey.

In December she made that flight to Japan with a daughter. The sound of the announcements on the Japanese airline shocked her, taking her momentarily back in time.

Japan was finally the release she had been seeking so long. She met up with other comfort women from Korea, China, Philippines, she was interviewed on both Japanese and Australian TV. When she got up to speak at the Hearing she told the audience that she had forgiven the Japanese for what had been done to her. Forgiven but she would never forget.

She returned to Australia with a bit of apprehension but she needn’t have worried. As she says at the end of her book, “I had arrived home to peace, love and acceptance.”

How did Indonesia’s Economy Come Around?