Bandung, with its factory outlets and bakeries selling the ubiquitous brownie, this city has long been a favourite destination for Jakarta folk looking for a cooler shopping experience. Now, of course, with the advent of budget airlines it’s not only Indonesians flocking to splash the cash. People from Malaysia and Singapore are discovering it makes for a refreshing weekend break.

There has been a Bandung going back many centuries. But the Bandung that hosted the Asia Africa Conference, the city that attracts visitors and locals alike, is to all intents and purposes a Dutch creation. It was the Dutch who insisted the original village be moved a few miles, it was the Dutch who brought the railway and it was the Dutch who made Bandung a must see on the nascent round the world tour with their gardens and Art Deco architecture in the early 20th Century.

It was therefore a bit of a surprise that the Indonesians, in their infancy as a sovereign state, should select the city to showcase the rise of the new breed of country carved out of the empire.

The 1955 Asia Africa Conference, hosted in this West Javan city, was supposed to point the way forward for the new nation states that had just rid themselves of their unwanted overlords and their paternalism. The final communiqué mapped the way forward and offered a brighter future from lessons learned the hard way. 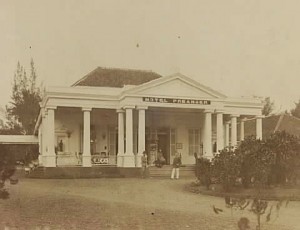 If Bandung can be said to have a centre then it is probably where the Grand Preanger Hotel now stands on Jl. Asia Afrika. This is the original Groote Post Weg. Just a few steps from the Preanger is a KM 0 marker which marks the start of the road that was to reach the length of Java.

Cross the road and enter the Art Deco Savoy Homann Hotel. Back in the 1920’s Bandung was known as the Paris of the East for its leafy boulevards and fashionable cafés that lined Jalan Braga. When the beautiful people came to stay they stayed in the Savoy Homann, among them Charlie Chaplin. The smooth rounded edges of the hotel’s exterior lead some to call this the ‘Ocean liner’ style of Amsterdam Art Deco.

Today crossing the road after about 9 am isn’t for the feint hearted but back in Bandung’s heyday the guests of the Savoy Homann would cross it to socialize in the Concordia Society. The planters and civil servants who called Bandung home would chat at the bar while the ladies and their beau would flirt in the large ballroom making the Concordia THE place to be.

A generation, a war and an independence later it was the likes of Sukarno, Jawarhal Neru, Nassar and Zhou En-Lai who came together for the 1955 Conference that gave this road its name. One wonders what the leaders of the new and ostensibly unaligned nations thought of the ostentatious surroundings where they drew up their final communiqué. 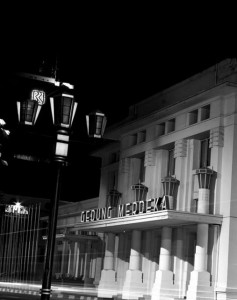 Today this proud building stands in silent homage to a different era. Its curved walls have seen much change down the years but for now, named Gedung Merdeka, it is a humble museum detailing the events and the characters of that 1955 conference when, momentarily, the eyes of the world were on Bandung.

Just a short walk west is the alun alun (public square found in traditional Javanese cities like Cirebon, Solo and Yogyakarta). After the colonial styles earlier we now fall headlong into something truly indigenous yet vital. For it was here that the Bandung chief at the time, R.A.Wiranatakusumah, relocated his seat of government under the ‘guidance’ of the Governor General of the early 19th Century, Herman Daendals.

On the north side is the Great Post Office, a throwback to the early days of the Groote Postweg while a road heading north, Jl. Banceuy also hints at a historical postal connection. Banceuy is a Sundanese word meaning post horses and they were probably stabled in the vicinity though as you stand gazing at the traffic you wonder how any four legged animal would last five minutes, let alone a horse.

Take the next turning right along Jl. Otto Iskander and you enter Pasar Baru. A panther made the mistake of coming here back in 1920 only to be gunned down for its troubles. This road and the side streets leading off it has some interesting old buildings that survive into the modern age. Before the Dutch started coming here in numbers there was little in the way of a Chinese population but that changed during the 19th century as large profits were made in the nearby hills and the railway which arrived in 1884 promised to deliver products to Jakarta in about three hours. 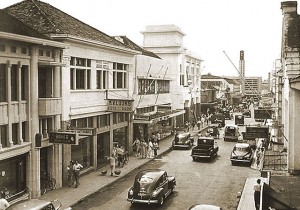 Even back in those far off days, railway tracks divided towns. South of the tracks was where people played; the cafes and bakeries on Jl. Braga, the Concordia, the Savoy. North, as the road gently rose, was where people lived, defended and ran the growing town and its environs. Just by the Hyatt Hotel today stand some impressive white washed buildings. After the chaos of Jl. Asia Afrika it is refreshing to walk along the wide, quiet roads that surround the military cantonments today used by the Indonesian forces.

Today’s visitor comes not for the old buildings or the history that stirs in Bandung’s streets but rather its factory outlets. Every weekend the new toll road from Jakarta is clogged as families fill the car and head south to the cooler climes and the cheaper prices. Jl. Martadinata, popularly known as Jl. Riau is a Mecca for these shoppers eyeing a bargain.

On the corner of Jl. Riau, you may notice in this area the streets are named after far flung islands in the archipelago, and Jl. Banda stands a factory outlet. No surprise there. But this particular shop is housed in a grand old house dating back some 100 years. In another time it was home to a planter, a pioneer who made his mint in the lush Parahyangan Mountains that surround this cool city.

Perhaps, after a busy day checking the accounts, he would mount his horse and head back the way we have just come, through the cantonments, across the railway line, down Jl. Braga to the Concordia for some cold refreshments.

This single story house with its columns surrounding the front door seems ill at ease with its current incarnation. The cars that fill its car park seem almost to insult this grand old dame but the empire is gone. It is not for visitors to decide what should happen to a town’s heritage. 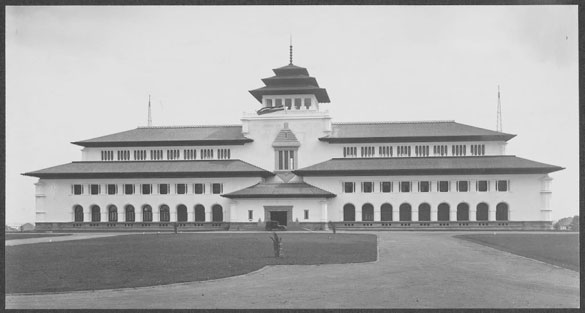 Bandung’s icon is the Gedung Sate but it was Dutch built and with this building the Dutch were making a statement. They wanted to move their capital from Jakarta, then known as Batavia, to Bandung and they wanted to rule their far flung empire from this Gerber designed building.

With a nod to local influences the central tower was topped off with a traditional three tiered roof and atop that was a single stick of sate; small chunks of meat skewered and ready to eat.

Time dictated the Dutch weren’t to rule from Bandung. 25 years after Gedung Sate was built the Indonesians were proclaiming independence. A planned avenue leading to the mystical Tangkuban Perahu was finally built by people who perhaps understood the sacred link between the rulers and the spirit of the mountain that dominates the skyline to the north.

Our journey through Bandung has taken us back through time and right up to the modern day. Daendals forced relocation of the original village, we’ve seen where the elite played and stayed but we end up gazing at a mountain that has inspired generations of young Indonesians.

That perhaps is the abiding memory of colonialism. It is ephemeral, it can never last because while a people’s body maybe subjugated, their soul can never be if they don’t allow it.