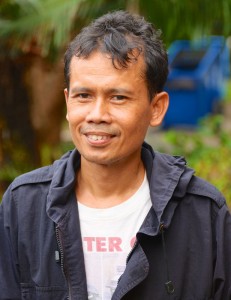 Tri is a fairly determined young man with a plan. He moved to Jakarta three years ago from Yogyakarta where he studied Electrical Engineering having landed a job at the University of IBS (Indonesia Banking System) in Kemang.

Like so many people who come to Jakarta seeking better job opportunities and more money, his children’s future is his foremost goal in life. His family includes two children aged six and 11years and they remain in Yogya, while their father saves as much money as he can to support the family.

Tri lives on the University campus, which saves transport costs, and he gets to live there rent-free. He works twelve hours a day and has two days off. Every two months he takes the ten-hour bus ride back to see his family in Central Java, taking advantage of the many public holidays in Jakarta. 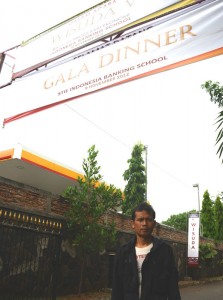 In five years time Tri plans to return to Yogyakarta and start his own business.

He talked to me about his very clear direction and sees plenty of opportunity in Indonesia. He is happy to see the big improvements in the economy in the past three years and hopes that this will continue, although he sites corruption as the biggest issue facing the country and feels a sense of frustration, like many young Indonesians, that there is nothing much he can do about it.

Tri also recognizes that it is important that he learns English, as this will create more job opportunities for him in the future. He hopes his children will complete their schooling and pursue a good education and take advantage of the opportunities that he has given them.