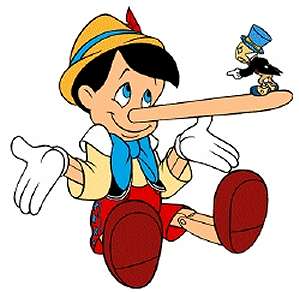 I have decided I am going to be completely honest with everyone from now on. No more lies, no more pretence. When I meet people I don’t like, I’m going to punch them in the face straight away. When someone asks me a stupid question, I’m not going to answer politely any more, I’m just going to say “You are a moron”. When someone shows me a picture of their ugly baby and says, “Isn’t he gorgeous?” I’m going to say, “No, he’s hideous, but don’t worry, by the time he grows up plastic surgery will be much cheaper.” When I fart in a public place, I’m not going make a “disgusted” face, look around and point furtively at the nearest old person any more, I’m just going to put my hand up and shout, “That was me!” When someone starts showing me photos of their recent holiday, I’m going to say, “What on earth makes you think I give a sh*t?” When I see a woman wearing too much make up, I’m going to tell her, “You look like a clown.” When I see someone wearing too much jewellery, I’m going to say, “I don’t care how much money you’ve got.” When the lift doors open and people start trying to get in before I can get out, I’m going to shout, “What the hell is wrong with you people?” and start laying about me with my briefcase.

These and many more completely honest acts would make the world a much better place don’t you think? Actually they wouldn’t – because lies are a necessary part of civilised society. If we all went round telling the absolute truth all the time the world would very quickly descend into chaos. Imagine if there was no “diplomacy”. If world leaders were to tell each other the honest truth all the time instead of pussy-footing around and couching everything in terms it would very quickly lead to World War Three. The strange thing is, everybody involved knows that they are lying and being lied to, but nobody minds because everyone is being civilised and politically correct.

There are only two groups of people who don’t lie. Children and drunks. A few years ago I took my youngest daughter to her friend’s birthday party, and while I was standing talking to one of the other fathers, a little girl about eight years old suddenly appeared in front of me. I looked down and said, “Hello.” She looked up at me in silence for a few seconds and then asked, “Are you Samantha’s daddy?” I said, “Yes, I am.” Without missing a beat she said, “Yeah, my dad’s old as well..” and walked away.

Of course children tell the truth because they have not yet learned the rules of civilised society and are therefore not bound by them – and nobody expects them to be. Drunks, on the other hand, know the rules but have forgotten them, or they just make simple mistakes that they wouldn’t make if they were sober, or they have ingested enough liquid courage to make them brave enough to speak the truth. I am sure this is the reason why it is nearly always the drunk guy who ends up in a fight.

A woman is paying for her items at the check out in a supermarket when a drunk guy behind her says with a slur and a wobble, “Wow… you… must be single…” The woman smiles slightly thinking he’s hitting on her and says, “Oh really… You think I am single because of the items I bought?” The guy says, “Nope.. because you’re ugly.”

Welcome to the Indonesian Kampung!