Our humble kampung townhouse, when we moved in with motorcycles, guys and monkeys, was populated by a swarm of spirits. The three-story edifice had been slapped together with inferior materials and crummy building techniques by a crooked Batak contractor, who is today shovelling coal in the nether regions (while getting his own nether regions poked with a trident by a red devil).

Hel, I didn’t care – I had me a brand new house for four thousand dollars, and I owned it as much as any other Warga Negara Asing owns real estate, which means “Zip”, as all property in this fine Republic is firmly in the fingers of the charming Warga Negara Indonesia wife, which is why you better play nice with her, buster.

Just like my new neighbours, I was exempt from the peril of wife or landlord, because my neighbours and I were all squatting on Government land, living along the chocolate Ciliwung, and none of us had title to the (steadily shifting and eroding) riverbank we roosted upon. Urban zoning rules stipulate that no party can build any structure within fifteen metres of the riverbank, but this is Indonesia, rules are bendable, and this is Condet, the tragic Cagar Budaya which used to be a Betawi cultural landmark of old Jakarta, under the fondly-remembered Governor Ali Sadikin, before he was given the boot by The Smiling General, as he was becoming too popular for comfort. So today, one simply greases the local Pak RW with enough fuluus and one is awarded some spurious surat ijin and allowed to build away. Ever since the oddly-lamented Soeharto era, all of us have been threatened repeatedly with being given the boot as well, as the city thinks about planning to ponder the possibility of doing something meaningful about the flooding.

Our little lane is squiggled right between a gargantuan cemetery and the frequently-flooding nasty waterway. That is the purpose and the thrust of this meandering essay, meandering along the meandering Ciliwung, for this hack writer is earnestly searching for someone or some organization to rescue some dead Dutchmen from said burial grounds. 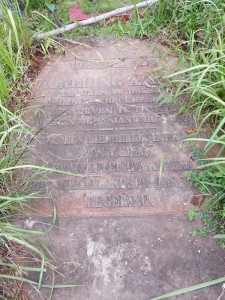 The cemetery is chock-a-block filled up, jammed to the gunwales with deceased local yokels. In former times it was known as kuburan Belanda, I am informed by the esteemed gravediggers, who then go on to exclaim triumphantly, “But today it is kuburan Islam!” Okay, fine, heads you win, tails I lose.

In fact I like graveyards. They are repositories of history and culture (and bones and worms). Whenever I travel I always make a point of visiting them. I recall a visit to the Chinese Cemetery in Bandar Lampung, where there were grand edifices which must have cost more than my crumbling house, with a little ceramic photo of a daughter killed in a car accident at the age of 17, or a blurry black-and-white shot of a mean-looking granny still mumbling as she counted out those Rupiah in the afterlife. Fabulous architecture, grandly sited over Lampung harbour, with a view to die for, so to speak.

Back to my graveyard – no, I’m only inviting you for a tour above-ground. My initial visit there I was taken by the aforementioned cheerful gravediggers to a grassy knoll just off-centre, to see kuburan Belanda (Dutch graves), which is the very point of this essay, if I’ll ever get around to it.

Placed proudly there among all the tiny graves of unlucky Betawi yang ko’it were two weed-covered plots, set side-byside, containing undoubtedly prominent Dutch nationals, held down by a thick slab engraved with a testament. I looked around and found six of these Dutch eminences, but the carved inscription has been scraped off of four, one more has collapsed inward, leaving only one stalwart Nederlander taking his dirt nap.

Which my trusty Google Translate translates as:

Dokkum is a Dutch fortified town in the municipality of Dongeradeel in the province of Friesland with 13,145 inhabitants, as of 2006. The fortifications of Dokkum are well preserved and are known as the bolwerken.

Now here’s the deal. Meneer Ament really needs to be rescued before local Condet authorities, succumbing to the mampus population pressure of the cemetery, chuck him and his lovely chiselled slab into the Ciliwung (Condet is rapidly filling to the brim). What he needs is to be escorted to a roomier resting place. 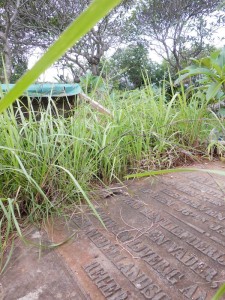 I don’t know where to turn. I’ve sent an e-mail to one of the cultural poo-bahs at the Jakarta Erasmus Huis, which was met with the silence of the grave. Is any alert reader of Jakarta Expat able to suggest an interested organization, or point me the right direction? Are there any Netherlands historical societies ready to dig in (sorry) and preserve this important historical monument? Call me at 087882502959, ready to reassure whoever answers that you’re not from the collection agency or the bidan.

Oh and the ghosts-a-swarming around my tilting palazzo? I failed to tell you about the ghastly shades infesting my new house when I moved in? Did this cultural appeal meander that much?

Well, it may have to do with the belief among my folk in the West that the spirits do not like to cross water, for whatever spiritual reasons they might harbour. And our lane, Gang Balai Rakyat, is pressed right between said river and said garden of remembrance.

But the ghosts infesting my place skedaddled like bats out of hell when we moved in, noisily, boisterously, men and crows and monkeys and motorcycles, raising hell day and night. Those ghosts just can’t take the racket. Why else do you think those clever Chinese set off firecrackers and bang pots and pans during New Year? Get lost, graveyard wraiths. You’re no fun at all.