A photo of a drowned boy sparked an outpouring of international grief, prompting some Western countries to take more Syrian refugees; but in Indonesia, asylum seekers are ripe targets for scammers.

A rental agent in Jakarta has ripped off at least a dozen Middle Eastern asylum seekers, taking their money for long-term apartment leases but paying the actual owners for only a few months, resulting in the foreigners being evicted. Police and apartment managers don’t want to help.

Asylum seekers don’t have an easy time of it in Indonesia. If arriving at Soekarno-Hatta Airport, they can be taken aside and asked to pay bribes of US$,2,000 or more to enter the country.

After registering with the United Nations Refugee Agency (UNHCR), they can then wait up to four years in Indonesia for processing. Those who are granted asylum will eventually be resettled in a third country, such as New Zealand or Canada. Those who are denied refugee status may risk getting on boats to Australia, or they can return home if they are not facing persecution. While stuck in Indonesia, asylum seekers are not allowed to work, so most of them live on funds provided by relatives in their home countries. Some also receive funds from Western charities. 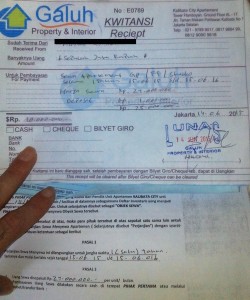 Sami, an Iranian, arrived in Indonesia in January with his young teenage son, claiming they were fleeing political persecution. They needed a place to stay in Jakarta pending the lengthy process of applying for asylum. Some refugees living in the Kalibata City apartments complex in Pancoran, South Jakarta, introduced Sami to a rental agent named Naomi Catharina Sahita (41).

The Kalibata City apartments have become a magnet for refugees, mostly from Afghanistan and Iran. The complex is also home to some Eastern European women, whom Immigration authorities have accused of being sex workers. The apartments are occasionally raided by Immigration officers.

Naomi offered Sami an apartment for two years for Rp.56 million (about US$4,000), plus a bond of Rp.1.5 million. He accepted, signed a lease agreement, and then invited an Afghani refugee to share the apartment with them to cut costs. All was well until August, when they received a visit from the apartment’s real owner, who informed them the lease had expired.

Sami was shocked and showed the owner his two-year lease agreement expiring in January 2017. The owner said Naomi had paid for only six months. About 20 other refugees in Kalibata City, all of whom had six-month to two-year rental agreements from Naomi, suddenly faced the same problem. Owners were showing up to demand more rent.

Naomi, who had been renting out apartments as recently as August 8, was nowhere to be found. She stopped answering her phone and ceased communicating on WhatsApp. The two numbers that she had provided on rental agreements are no longer active. The management and security guards of Kalibata City initially told the refugees they should stay in their apartments if they had leases. But a couple of weeks ago, the guards changed their tune and declared that tenants who could not pay for new leases would face eviction. 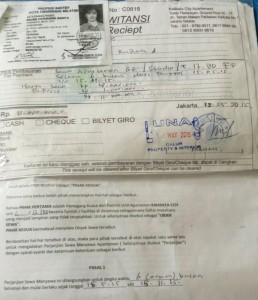 Sami says one asylum seeker returned to his apartment one afternoon to find the lock had been changed on his door. Security guards told him to leave, so he lost his furniture and possessions. Others were warned by thugs to leave or face forceful eviction. Some of those evicted have gone to Bogor, south of Jakarta, where they can rent a spartan room for Rp.300,000 a month or pay Rp.2 million per month for a small house. The problem with living in Bogor is that police sometimes extort money from asylum seekers. Sami decided to stay in Kalibata City, but he had to pay the apartment’s owner for a new lease.

“The other swindled refugees tried to complain to police,” says Sami, speaking through an interpreter, “but the police rejected them and said they should leave the apartments and go to the court. But because they are refugees here they cannot go to the court.”

Most of the swindled leaseholders were single men, some of them sharing an apartment between three or four. There were also a few families. The prospect of initiating legal action in Indonesia is a daunting one for any foreigner, let alone an asylum seeker with few rights and no income.

Police should be able to track down Naomi based on the two different Resident Identity Cards (KTPs) and the bank account number she attached to lease agreements. Unfortunately, police are often unwilling to deal with complaints or conduct investigations unless they are paid to do so. There seems to be no sympathy for Middle Eastern asylum seekers.

Some of the Middle Eastern asylum seekers in Jakarta are not thrilled by the fact that a photo of a dead three-year-old Syrian boy on a beach in Turkey resulted in Western countries offering to increase their quotas for Syrian refugees.

Arash, an Iranian refugee who has been in Jakarta for over two years with his wife, says life for refugees is easier in Turkey than in Indonesia, so the West should not be encouraging people smuggling by offering to take more refugees without first carefully screening them.

“Many of us have been here [in Indonesia] for a long time. We follow the process. We are not getting on illegal boats or using people smugglers. Now we see that lots of Syrians are using people smugglers and getting entry into European countries. It’s like they are queue-jumping, just because of that photo.”

“Many children have been dying in conflict for many years, but people only care when a photo trends on social media.”

The ill-fated toddler in the photo was Alan Kurdi, although some reports said the family’s real surname is Shenu. Alan and his five-year-old brother and their mother were among 12 people who drowned on September 2 when two boats carrying them toward a Greek island capsized. Alan’s father, Abdullah, had been working in Turkey for two years. Some survivors claim Abdullah was a people smuggler, at the helm of one of the boats – a claim he has denied. Instead, he blames Canada for the deaths of his sons and wife, although Canadian authorities say he never applied for refugee status there.

Arash says it is irresponsible to have a child in a conflict zone and to put a child’s life in the hands of people smugglers. “I have been married for 10 years. Every day my wife asks me for a baby. I say not until we are resettled in a safe country. You should not put a baby or child in danger.”

Security is paramount for all asylum seekers. Having the security to receive support from police when they are scammed by unscrupulous rental agents would make life easier for those in Indonesia.

Dead in the Water