One of the most important things for Indonesian expatriates to remember is that the country’s laws and regulations are often amended and updated. However, sometimes the opposite is also true. Laws that have not been changed for quite some time suddenly receive a major overhaul, leaving many foreigners wondering what the changes entail.

This article will touch on two legal areas that went through amendments in their legal frameworks. This refers to Immigration Law and restriction on positions that may be held by foreigners.

As a background, the House of Representatives passed the Bill on Immigration in April 2011. It included increasingly accommodating provisions on Permanent Residence Permits (ITAP) that were welcomed by foreigners and their Indonesian spouses. For example, spouses in a mixed marriage are to be granted ITAP after residing in the country for 2 consecutive years (Article 60(2)) and spouses and/or children of a foreigner holding an ITAP are to be granted an ITAP promptly (Article 60 (3)).

Article 59 of Immigration Law also allows unlimited extension of ITAP after its expiry. ITAP is initially granted for 5 years and it should be noted that previously, it had to be renewed every 5 years. This certainty was also welcomed by mixed marriage couples.

Currently, the Law awaits its Implementing Regulations (PP). The update on PP is reported via http://www.expat.or.id/info/mixmarriages.html.

On August 14th, the latest version of the PP of the Immigration Law was posted on the Immigration Department website. However, the PP have still not been officially ratified as of October 2012.

Please note that the Law is in force since the day of promulgation, which is 5 May 2011. Implementing Regulations of previous Law on Immigration remain valid until they are replaced by new PP and as long as they are not contrary to the new Law.

This means that previous procedures are applied to the new provisions, unless the procedures are contrary to the Law. As a result, the confusion regarding implementation remains. 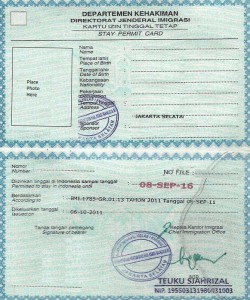 It seems that some officials are still unaware of the Law’s provisions, as a result, when applying for ITAP under the Immigration Law, it is recommended that you bring the printed version of the Law with you. It is hoped that Immigration Law is implemented shortly and the confusion amongst the mixed marriage community dissipates.

On another note, Minister of Labor and Transmigration Decree No. 40 on Restricted Positions for Foreign Employees (Decree) has been issued in February 2012.

This Decree lists 19 positions that are unavailable to foreign workers and it is Indonesia’s first legislation to issue such restriction.

One main concern with this list is the inclusion of the “Chief Executive Officer” position. It is suggested that investors will withdraw from Indonesia if they are unable to hold the position of a CEO.

However, the Ministry of Labor and Transmigration explained that CEO is not a position that is common in Indonesia. In fact, it would usually refer to the highest management position in the company. That is, a CEO would be a resources and administration manager. Further comments suggest that restriction on the position of a CEO will apply to Indonesian-owned companies because CEOs in those companies handle human resources, which is restricted for foreigners. Apparently, this would not apply to CEOs in companies with foreign shareholders since their duties do not entail management of human resources.

It is clear from both legislations that there are issues of implementation and interpretation. It is left to the readers to ensure that they are equipped with patience and attention to detail.  What you do not know about Indonesian law is at times more important than what you do know, and thus, whenever something is of concern to you, do not hesitate to seek legal advice or information from relevant sources immediately.

(Anything written in this article is intended to provide information only and is not intended to serve as legal advice).

How to Handle Stress at Work