It is an hour before dawn as I make my way up the gently sloping hill to the cemetery outside the village of Blangsinga, on the island of Bali. There is no wind and a scimitar of a new moon hangs overhead.

I fall into step with perhaps fifty or so men who carry an assortment of implements for digging. Hoes, shovels, picks and long metal spikes are carried nonchalantly over shoulders. In a way we resemble a ragtag medieval army off to fight a battle.

On arrival at the cemetery, the men divide into small groups and make for their assigned family grave. In the darkness I can hear others already at their task of digging. As the new day begins to dawn and the light casts its morning glow I see, standing in rows, gaudy platforms and life-sized animal statues looming over me in rows under the trees. Elephants, bulls, both black and white, dragons and huge fish rear like giant sentinels, as if keeping watch over the morning’s proceedings.

Today is to be a special day for the village and the hundreds, if not thousands, of family, distant relatives and a host of friends, many of whom have travelled great distances to be here, to gather to farewell the dead. One hundred and eleven bodies will be exhumed, the bones washed and wrapped carefully in white muslin and placed into their allotted sarcophagus, blessed by priests with holy water before being burned and sent into the afterlife.

A Balinese cremation is, to the western eye, a dramatic event that can leave the onlooker puzzled by its complexity, as in reality the cremation ceremony has absolutely nothing to do with a dead body. In Bali, the body is nothing more than an impure, temporary shell, having no significance at all, except as the container of the soul and its anchor to the earth.

At the time of death all thoughts are concentrated upon the spirit and its passage to heaven. Instead of grieving, the Balinese prefer to throw a great celebration to hasten the departed souls to oneness with God.

The soul of someone who dies cannot immediately leave the body. At first the Atman (the immortal soul) hovers near the body sometimes as a ghost that can bother the deceased’s family. Only after the body’s five elements (air, earth, fire, water, and space) have been returned to the macrocosm by burning, can the soul completely detach itself from the body.

The sun now makes its way above the line of trees and the light glistens on the myriad of colours that make up the hundred or so, large and small sarcophagi scattered throughout the cemetery. There is shouting and laughter from the rapidly growing crowd as a procession of women arrive carrying objects in silver bowls on their heads. A large orchestra of men and boys dressed in vivid, purple jackets adds to the growing din.

There is a pervasive belief that no expense should be spared for the final send-off of the soul and any skimping constitutes disrespect to the departed. A cheap cremation is considered a rather bad way to start one’s afterlife. These ceremonies can, and do cost millions of Rupiah, which can severely tax the families’ resources as hundreds of people are involved in the lead up to the grand day, which can take weeks and even months of preparation. Not only are the spirits impressed by a grand cremation, but the family gains prestige and status in the village with a costly ceremony.

Today’s particular event is a ‘communal’ cremation where funds are in effect pooled so that the cost is spread throughout all of the participants, thus lessening the burden on the poorest of the community.

With all the thousands of details in the lead up to the event, there seems to be no checklist, as in essence no one is in charge but it all works out in typical cooperative Balinese fashion. 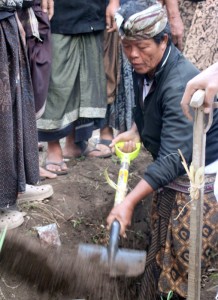 By now the heat has begun to set in.

The diggers, who regularly swap places, are deep into the graves and finally the buried bodies, wrapped in white shrouds are spotted in the earth. The attending family members now jostle for position around the grave and a white ribbon attached to a three-pointed stick from the dab dab tree is ceremoniously lowered into the open pit.

With a mighty “One, two, three!” shout, the resting corpse is rather unceremoniously hoisted onto the side of the grave. The shout I am told is to wake the sleeping dead!

Once there, it is gently unwrapped, exposing the bones, washed in holy water and carefully arranged before being wrapped in pure white muslin. The body is then borne by several men shoulder-high, three times around the grave before being carried to the allotted sarcophagus and placed inside.

Once all of the bodies have been exhumed it seems it is time for lunch and a bit of a rest. Cheerful vendors have set up stalls selling all manner of food and drink while balloon sellers holding aloft their colourful wares wander amongst the crowds, followed by bands of excited children.

I take my rest and lunch at the family home of my host, Leo Sinatra, who fills me in on some of the more intricate details of the day’s events. Suitably fed and rested, we make our way back to the cemetery following a large procession of family members carrying offerings on their heads.

The orchestra bringing up the rear is in fine form!

Children, mothers and wives carry photographs or paintings of the deceased and the mood is joyful with laughter and horseplay taking place along the line. Each family breaks away to deposit their offerings into their family’s sarcophagi, attended by a priest who sprinkles holy water from clay pots that are ceremoniously broken when the ritual is complete.

This takes a while and a torpid lull falls over the crowd that by now measures at least three thousand. They sit around in the shade catching up on local gossip and chatting with relatives who have travelled from all over Indonesia to attend this grandest of ceremonies.

Then without warning, young men race through the crowd carrying lighted torches and within minutes the tranquil scene is no longer tranquil as the entire cemetery suddenly ablaze. This is high drama at its best.

The huge sarcophagi begin to smoke and then, as fire catches hold, flames dance around the elaborate structures consuming them in yellow busts of fire that crackle and explode in showers of sparks. I am in a frenzy, desperately trying to take as many pictures as possible, while at the same time avoiding the fierce heat erupting all around me. I begin to understand what it must be like for a photographer in a war zone!

Burning elephants, bulls and dragons are rapidly consumed in the blaze and slowly begin to topple from their lofty platforms. All too soon it is over, and as the heat subsides, I wander through the charred remains. Black and singed dragon; heads seem to breathe actual fire, while elephant trunks are now reduced to smouldering appendages. This certainly gives new meaning to the term, “ashes to ashes”!

Tonight the ashes will be collected and taken to the temple and guarded overnight before a grand procession tomorrow makes its way to the sea. That story, however, I will leave for another time.

I am greatly indebted to Fred B. Eisman JR whose essays Bali: Sekala & Niskala was helpful in giving me an insight to the complexity of Balinese cremation.

And also to Leo Sinatra for his extraordinary hospitality and intimate knowledge, which he so willingly gave.