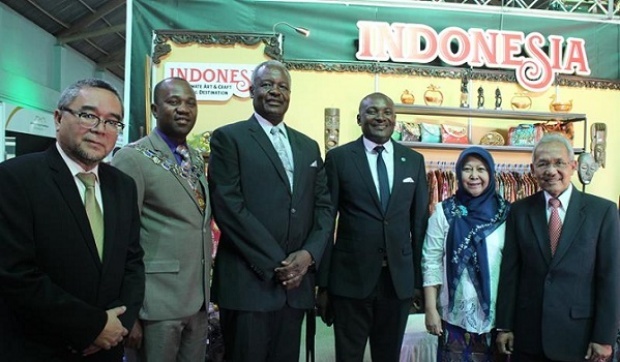 The Namibia Tourism Expo 2017 hosted earlier this month in capital Windhoek was a roaring success for Indonesian tourism and craft industries hoping to move into the booming continent.

The ‘Indonesia: The Ultimate Arts and Crafts Shopping Destination’ event featured some of the country’s best traditional handicrafts with a focus on batik.

Hadi Sufri Yunus, the Executive Counselor of Economic Affairs, Information, Society and Culture at the Indonesian Embassy in Windhoek, said visitors to the tourism expo flocked to Indonesia’s wares.

“By displaying and selling Indonesian handicraft products, it is expected to create business opportunities, as well as to raise the awareness regarding the culture of Indonesia, considering that many Namibians are fond of batik,” Hadi said.

Indonesian Ambassador to Namibia Eddy Basuki said the embassy is looking to promote free visa travel for 30 days in Indonesia, which has recently been extended to dozens more countries including Namibia.

“In addition to attracting more tourists, we hope Namibian businessmen can explore the business opportunities of Indonesian handicrafts considering the quality and look to compete with other countries craft products,” he said.

The Namibia Tourism Expo is one of Africa’s most prominent promotional events and is closely followed by neighbouring countries, including South Africa, Angola, Botswana, Zimbabwe and Zambia.

Eddy then added, “The participation of the Indonesian Embassy in Windhoek in Namibia Tourism Expo cannot be separated from the Government of Indonesia’s mission to attract more foreign tourists to visit Indonesia, including Namibian tourists which is considered a potential market for Indonesia,” Ambassador Basuki said.