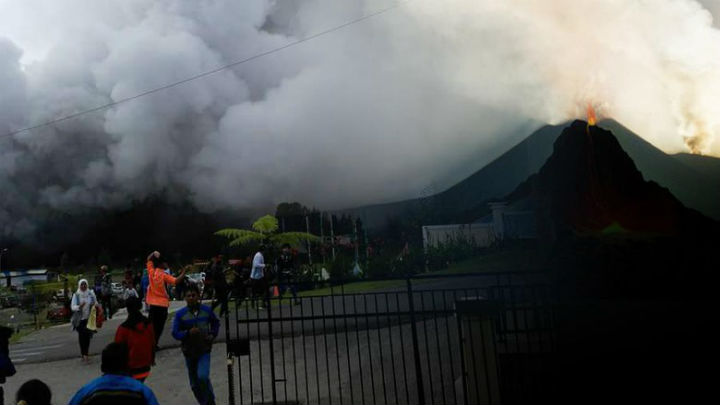 Dieng is one of the country’s most active volcanoes and often claims lives during eruptions.

Dieng Observation Post at the Centre for Volcanology and Geological Hazard Mitigation (PVMBG) Surip said the phreatic eruption, which occurs deep below the water table, occurred around noon. The eruption reached 50 metres above the crater and burst volcanic material across the parking area at Waterboom, a local water park.

No fatalities were reported in the eruption, but at least ten tourists were taken to the nearby community health clinic in Batur after being covered in hot mud.

A National Search and Rescue Agency (Basarnas) helicopter response was sent to the location, but crashed 12 minutes after taking off from the Achmad Yani International Airport in Semarang, Central Java, around the Butak Highlands in Temanggung.

All eight on board — four Basarnas officers and four helicopter crew members — were killed. The remains were taken to Bhayangkara Hospital for further identification, while authorities will investigate the cause of the crash.

PVMBG advised visitors and locals in the area to remain at least 100 metres away from the crater on June 24. Since the eruption, the Sileri Crater area has been closed.

“Due to recent phreatic eruption, we are now trying to collect more data to consider the possibility of expanding the radius of danger,” Surip said.