The mention of Krakatau, located in the Sunda Strait between Java and Sumatra, arouses a variety of gut feelings to a variety of folks. Ask an expat what they think and they respond with goofy comments like “Oh, I’ve been out there, nice place,” and, “Been there, done that.” Ask an Indonesian and you can get some heart wrenching comments that border on fright, ancestral spirits and a godly powered natural event wrapped around a feeling of just let it be. No one wants to remember the 1883 tragic event for which 36,000 people died, triggering a tsunami of 50 metres and spewing enough ash into the atmosphere to circle the globe three times.

Krakatau certainly has its mystique. Just getting there is a journey of mental patience and kidney malfunction. In the last few years I have made this sojourn three times; each swearing to be the last. So be it, just last weekend I hauled my wife, two kids and an unsuspecting co-worker from Canada to the very place I swore was now history. We stayed at some bungalows on Anyer Beach, which are still the same today as in 1992. The beach is of a beautiful cupid shape with good boogie boarding and body surfing. Evenings can be so peaceful with a solace of starlight and gentle sea breezes. I just didn’t think of the no AC, banyak bed bugs, broken screens, lack of hot water and dead geckos in the bedrooms. We could forget the solitude that night due to the 100db karaoke at the local hot spot and some friendly neighbour’s firecrackers going off at 2am. Then came the mosque at 4am. 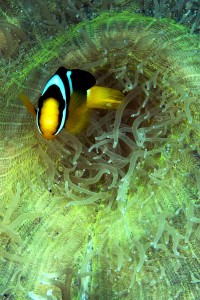 As you can imagine, my crew woke up quite grumpy the next morning as I had further planned to meet the boat at 7am. The morning was true to form as our boat pick-up location was different than that agreed to the night before. After hauling 80kg of gear through the winding kampung trail with no sign of a boat, I made a call to only find the boat (and crew) were waiting for us at a marina six kilometres away. The boat captain quickly realized his mistake and soon arrived on a motorcycle as the boat met us at the beach shore.

The trip out to Krakatau was uneventful although pretty stoic. My youngest son wore a perpetual scowl on his face as he was second in space to 10 highly pressurized SCUBA tanks filling the floorboards. My oldest son was smarter by just heading to the bow to soak up rays. Seas were relatively calm with large cumulus clouds billowed on the horizon. The trip seemed to turn into eternity for the 40 kilometres. Eventually we became close enough to see that the volcano was shrouded in dark ominous-looking rain clouds.

All I could think of was Jurassic Park. The seas became still and the humidity oppressing. Anak Krakatau was pulsating poisonous steam and small pyroclastics, acting like my home percolator on a bad morning. It was then that the captain told us the local ‘foreigner fee’ to climb Anak Krakatau is now 4 million Rupiah! This is a new form of corruption at its best and was dreamed up by the local chiefdoms, as Krakatau is actually a National Park! Whatever. We didn’t want to step foot on that puffing baby anyway. I wanted to get underwater as soon as possible.

The two dives were beautiful, but seriously lacked the appropriate number of reef fish. Cascading house-sized boulders littered the slope of the seafloor down to at least 40 metres. Monster gargantuan sea fans inhabited the deep along with appropriately large green moray eels. After the first dive, I was too afraid to extract my SLR camera from its underwater housing to change into the wide-angle lens due to our ‘uncontrolled conditions’. This turned out to be a critical stupid move, as the second dive against an offshore outcrop was spectacularly big-country scenery.

Lunchtime came and we pulled into a small sandy cove on the east side of Pulau Verlaten. We were not alone as the crew started a fire to cook our gourmet meal. One, two, then three very inquisitive, big monitor lizards came in for the picking. Before I realized it, our Canadian friend was back on the boat. I didn’t have the heart to tell her they are avid swimmers. The lunch was amazing and beautifully prepared, considering the only utensils were a spoon, a dull knife, a broken burner and a home-made fire. Saying goodbye with a stick to fend off our pesky monitors, we head back to sea for a short snorkel into an underwater jacuzzi near shore to Anak Krakatau and then power back to port. The drive back through Cilegon was an understatement of making four lanes of traffic out of a two lane road. Only in Indonesia!

What I have always loved about Krakatau is its ever-changing landscape and activity. In over a dozen visits, dating back to 1992, it never ceases to amaze me as to the grandeur and pent-up power this volcano exhibits. Years ago, I was on-site during a tragedy involving a number of teachers in which one young lady died. One does not easily forget such things in life and it has certainly given me a healthy respect for the volcano from that point onward.

Geologically, most of the three original volcanoes are currently submerged, as the last eruption blew the complete complex apart, forming a massive series of calderas. Subsequently, the calderas further submerged due to crustal shrinkage during the cooling phase. Only a portion of one of the pre-1883 volcanoes remain (Pulau Rakata) from this most recent explosion. What most folks don’t realize is that the other two islands, Pulau Vertalen and Pulau Lang, are remnants of the collapsed ancestral Krakatau dating back to 416 AD! Krakatau emerged in 1927 and has since continued to grow. 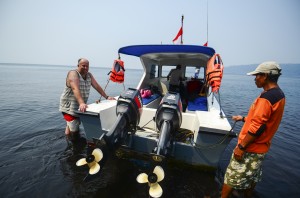 Location (province): Carita is in Banten province. The Krakatau complex is located in Kabupaten Serang.

Where to stay: On Carita Beach: Sambolo Beach Bungalows: www.sambolo.co.id/ From here you can take day trips to Krakatau. Alternatively, hire a liveaboard like the Cecilia Ann and sail around the Sunda Strait. Diving facilities available: http://javaseacharters.com

Things to do: Visit the Cikoneng Lighthouse in Anyer. This lighthouse was built in 1885, two years after the original was wiped out by the 1883 tsunami. Other fun activities include mountain biking through rice fields and countryside (bring your bikes), beach activities with massages and banana boat rides. Fantastic western facing sunsets of Krakatau looming out of the Sunda Strait sets the end of a perfect day.

The Delicacy that May Turn Your Stomach

A Trip to the Badui Tribe