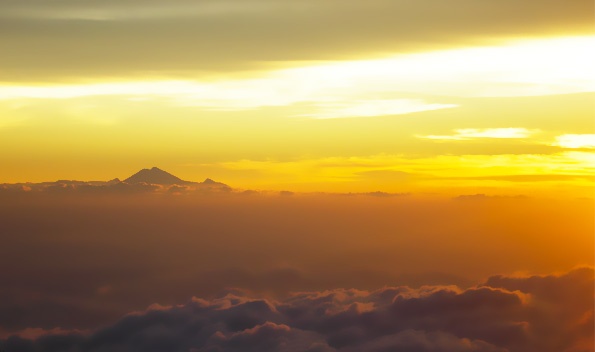 With approximately 127 active volcanoes spread across the country, it can be difficult to know where to begin if you haven’t climbed one before. Many great Indonesian volcanoes are actually not too far from provincial airports or major train stations in Java and southern Sumatra, and can, therefore, be explored in a single weekend. The more remote mountains, particularly those in the Moluccas, Sulawesi and Nusa Tenggara, are usually best enjoyed as the highlights of a week-long itinerary across a far-flung region. Individually, the following five hikes represent different volcanically-active regions of Indonesia. In all cases, it is important to return the same way that you ascended unless other options are specified.

Although the behaviour of these gunung-gunung api (mountains of fire) can be predicted to a reasonable degree, it is vital to check with Indonesia’s Volcanological Survey website (http://www.vsi.esdm.go.id/) for status updates and also to take heed of what local people in the village nearest to the volcanoes tell you. When East Java’s Gunung Kelud erupted in February of this year, local people knew this was imminent as local animals began to flee the forest 48 hours in advance. If you follow advice, then generally speaking it is more dangerous to cross a road in Jakarta than to climb a volcano.

Known to many locals as ‘Bukit Kaba’ (Kaba Hill) despite it being almost 2,000 metres high, this volcano attraction is one of Sumatra’s most accessible. As is the case with mountain peaks in most parts of the archipelago, the best time to enjoy the views and take photographs from the crater rim is first light. From the entrance gates, you can either spend two hours hiking on foot up to the rim or cheat by taking an ojek (motorcycle taxi)! The volcano actually consists of several craters, both active and inactive. A circuit of the largest craters takes about two and a half hours and is not technically difficult. One of the eastern craters is likely something out of Star Wars – a deep belching pit of smoke with a blue-green lake at the bottom of it. Plant lovers should be sure to ask about local Rafflesia blooming in the area because they can be found growing wild very close to the main road in this region.

Getting there: Either fly into Bengkulu and take a seat in a ‘travel’ (shared cars) towards Lubuk Linggau or make your way up to Lubuk Linggau on the night train from Palembang before boarding a bus (or ‘travel’) onwards towards Curup. Ask for ‘Simpang Bukit Kaba’ (the junction) or Villa Hijau which is one of the closest hotels on the main road.

Despite the bumpy road leading up to the crater, Papandayan makes for one of the very best days out in the whole of Java. If you live in Bandung you could do it as a day trip. There is a car-park, a guide’s post and several warungs (small shops) next to the main active crater and this parking area is somewhat bizarrely known as Camp David locally! The place can get quite busy during weekends. To what extent you explore the range is entirely up to you. You could take the family there for an hour’s stroll around the main crater with many active fumaroles and hot bubbling mud, or make a whole day or weekend of it by continuing on to Pondok Salada and the many mysterious Edelweiss-covered meadows higher up. For the most adventurous hikers, it is possible to follow the wide cobbled track onto the saddle between the main range and the outlying Gunung Puntang, past the remains of the Ghober Hut (no longer standing on my last visit) right the way over the range and down the other side towards the vast and remote tea plantations near Cileuleuy.

Getting there: From Jakarta, head towards Bandung and continue to the end of the toll road, following signs for Garut. The best place to stay is Cipanas (‘hot water’, not to be confused with the town of the same name in the Puncak area) just outside Garut itself and about 45 minutes away from the crater car-park above Cisurupan.

This world-class volcano is a demanding proposition, both in terms of the hike itself and getting to the starting point on the island of Sumbawa. The crater is Indonesia’s largest at around 7km diameter and several hundred metres deep and was formed in April 1815 when 160 cubic kilometres of material were ejected into the atmosphere. This disrupted global temperatures and caused the significant crop failure of the ‘Year without Summer’ of 1816 in the northern hemisphere. The Tambora eruption was considerably more devastating both locally and globally than the more famous Krakatau (Krakatoa) eruption which came later the same century in 1883.

Thankfully, Tambora does not at present pose a serious threat, and interest in hiking to the rim is growing in the run-up to the bicentenary next year. You need at least one night of camping on the mountain, although most would be more comfortable spending two nights up there. All hikers are required to register near the trailhead in the village of Pancasila where local guides and porters can be found. It is a long eight or nine hours up to the crater rim, which might be best broken into two stages. Camping on the rim is a spectacular experience but not easy due to the black volcanic sand, which is difficult to keep tent pegs secured to. The view from the top is among Indonesia’s very best, with the vast ‘volcanic canyon’ below you on one side and a sunset over Lombok’s Rinjani on the other.

Getting there: Fly to Bima via Denpasar and then spend the best part of a day getting to Pancasila on the Tambora peninsula. Alternatively, larger groups could fly into Sumbawa Besar and charter a boat from the port of Badas to Calabai.

Known also as ‘Ile Api’ by local people, this continually steaming volcano sits on its very own peninsula on the island of Lembata. It is best done as a strenuous day-hike from Desa Lama above Desa Jontana, where you should try to find a guide as Desa Lama is often deserted. If you visit in October, you may witness the special pre-Christian Bean Festival in Desa Lama and surrounding villages, which honours the local bean that has been important as a source of protein in local cuisine for many centuries.

The climb is a steep ascent of around four hours up to a vague and unassigned trail and is only undertaken a handful of times per year. Suddenly, just as the climb seems to be getting too steep for comfort, you find yourself peering over the other side into the shallow crater, which is easily one of the most photogenic locations in eastern Indonesia. From the northern peak, on a particularly clear day, you should be able to see Ile Boleng on the island of Adonara, and the remote, smoking Batu Tara island volcano out in the ocean. The higher, southern peak is so gassy and smoky that it would be very unwise to try to climb to the very top.

Getting there: There is a daily direct flight into Lewoleba from Kupang, West Timor. Alternatively, take a boat to Lewoleba from Larantuka at the eastern tip of Flores. The foot of the volcano is about one hour from the town of Lewoleba where there are several basic hotels.

Gamkonora is the highest peak on the island of Halmahera, and is something of a hidden gem, being considerably less famous – and also less dangerous – than its fiery neighbour Gunung Gamalama on the island of Ternate. Very few tourists make it out here. It can be climbed as a long day-hike if you are able to start the climb very early in the morning, which is also especially important for enjoying the views. Ask in nearby Desa Baru for a guide or two.

The trail starts near sea level – so you will need several extra bottles of drinking water – and leads up through coconut, nutmeg and clove plantations. A small collection of coins in an area of long cane grass marks the point as to where the mountain becomes sacred in the eyes of the villagers, so your guide may wish to stop briefly and say a prayer here. Not long after this, you will be above the vegetation line, wandering up over small rocks and admiring the stunning views over the U-shaped crater.

Getting there: Fly into Ternate and take a Jailolo-bound boat from the Dufa-dufa ferry terminal. Cars can be hired from the shop next door to Jailolo’s Hotel Camar for the two-hour journey on to the trailhead, which is on the main road opposite the volcanology post.