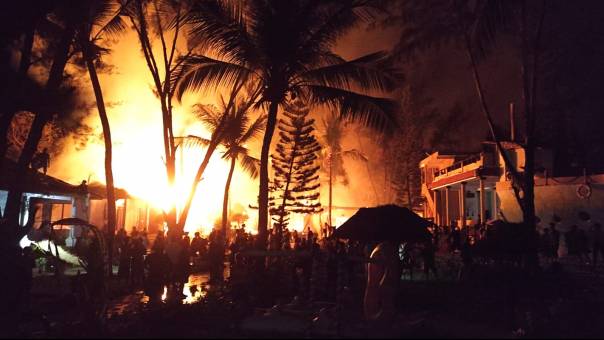 The head of Gili Trawangan Hamlet, Muhammad Husni, revealed that the fire incident almost scorched all the thatched-roofed hotel rooms.

“Residents were struggling to extinguish the fire using simple tools. Some used extinguishers and hotel pool water,” he said on Saturday via telephone.

According to the Head of the subsection of Information Management, Documentation and Multi-Media Public Relations of the North Lombok Police, Second Police Inspector Made Wiryawan, the fire started when a guest staying in room number 175 informed the hotel front office that there had been a fire in room 179. Based on this information, the Jambuluwuk engineering staff named Toni immediately checked the location and found the fire.

“Due to the strong winds and the roof of the building being made of thatch, the fire spread very quickly to other buildings, causing 59 rooms to burn out,” said Wiryawan in a written statement, Sunday 31st July.

When the fire broke out, a total of about 22 rooms were occupied by visitors. Luckily, although the fire managed to scorch a total of 59 rooms, there were no fatalities reported. The fire was successfully extinguished at 22.00 pm local Lombok time

Meanwhile, Jambuluwuk Hotel & Resorts Corporate Marketing Communication Manager Martha W Thomas said that his team was still waiting for a police investigation to determine the cause of the fire.

“All guests plus employees are safe, there are no casualties. After the investigation from the police comes out, we will hold a press conference,” said Martha when confirmed by Kompas.com.