Katherine Shea is a consultant with the World Food Programme, a part of the United Nations system. She talks to us about how poverty and hunger are still issues, even in today’s rapidly modernising middle-class Indonesia.

Katherine, tell us a little about your background. Where are you originally from?

I grew up in the US, in Connecticut. I’ve worked with the World Food Programme around the world though, first in Uganda, then in Ecuador and now here, in Jakarta.

Did you always know you wanted to work in development? Why?

I always cared deeply about food security, what people were eating, where their food came from and whether they had enough, good food to eat. Those seemed like the most important questions of life.

In the US I loved to cook with ingredients from local farms. But everywhere in the world our food systems have problems, so it’s an interesting field.

How did you come to be in Indonesia, and what is keeping you here?

While I was working for the UN in Ecuador, my husband was offered a job here. He was so excited about it that I agreed to give Indonesia a try! It helped that the Jakarta office of WFP had already expressed an interest in hiring me. Once we arrived we really loved the people we met, and we have enjoyed exploring the country, from the tiny remote islands to the rice paddies of Java. 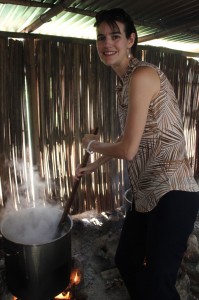 What do you love about living in Indonesia and what do you find challenging?

Exploring the lesser-known parts of the country. The cultural, geological and biological diversity of Indonesia is incredible, both on land and at sea. Of course, living in Jakarta, the traffic is frustrating – but traffic is just a symptom of Indonesia’s greatest challenge: the whole country has been taken advantage of by a few selfish leaders, who failed to build better roads, public transport, decent waste management or any other public good, because they were too busy lining their own pockets. Watching a whole nation struggle with the fallout of such corruption is the real challenge.

How have previous experiences of yours — whether jobs, placed you’ve lived, or education — prepared you for living and working in Indonesia?

Having travelled and lived abroad has been crucial to surviving here. Not because we knew what to expect, but because we knew not to have any expectations. I’ve learned from other developing countries not to expect a system to function in a way I’ll understand; rather, to be ready for a different way of doing things and of communicating. In Ecuador for example, it took me a month to open a bank account; I was always told it was impossible until a local helped me, using her connections. In Indonesia I was ready to not know how to navigate the system. But most Indonesians have figured out very efficient systems of their own. For example, sure; the traffic is horrid, but you can order anything for delivery! You just need to learn the local tricks.

Tell us a little about your current role at the World Food Programme. What does the organisation focus on in Indonesia and what is your part in it?

Why is hunger still a problem in Indonesia?

Probably due to a combination of poverty and inefficient supply chains. In other words the poor public and private infrastructure (like roads and storage facilities) for agricultural products makes nutritious food difficult to access. But of course poverty is a crucial element.

What are some of the key programmes the WFP is working on that you believe will have a real impact on Indonesians’ lives?

I think school meals could make a big difference for Indonesia. Unfortunately the government pulled the national programme several years ago. But elsewhere, school meals have been an effective way to improve the human capital of a country in one generation. Kids who eat at school tend to stay enrolled, attend more often and learn better. In addition, the models we developed in Papua and NTT use locally-produced ingredients. WFP hopes to shift to providing technical support to the government in order to improve the national school meals programme. 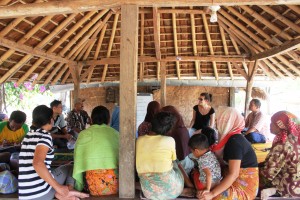 What do you see as the key challenges facing the WFP’s work here in the next three to five years?

As an emerging middle-income country, Indonesia is becoming a big player in the international economy, but simultaneously malnutrition still plagues its poorest residents, who are also at high risk for natural disasters. With the growing economy though, Indonesia is no longer a priority for donors. Unfortunately the government doesn’t quite have the capacity to solve these problems alone. Setting up national food security monitoring, disaster preparedness or school meals programmes is challenging, and without donor support the WFP will not have the funds to provide the government the technical skills it needs for these activities.

Tell us about a particular experience in your current role that has stuck with you?

I visited one of the local health posts where we deliver specialty foods for pregnant mothers and their newborns last year. I asked one of the mothers whether she ate all of the fortified biscuits we gave her last month herself, or shared them with others. She looked a bit embarrassed and said, “Well, I ate some, but my husband’s sister lives with us, so all of us ate them. I know they’re for me because I’m pregnant, but when there isn’t anything else to eat and everybody is hungry, we all share the biscuits”. It was a powerful reminder to me that in this country that has so much wealth, people are so poor.

Finally, we know that sadly you’re due to leave Indonesia imminently. What will you miss?

I will miss many people whose paths I have crossed in Jakarta, both expats and Indonesians. Overall Indonesians are incredibly kind and thoughtful people who genuinely care about the wellbeing of others, and that is a beautiful cultural value so often missing in the West. I’ll miss living among such a culture!

Thank you Katherine. To get in touch with the WFP, please visit www.wfp.org