Andreas, where are you originally from?

I was born in 1962 Germany, growing up in and near Hamburg. In 1978 I started as a Fish Breeder and Fishery Biologist at a combined fish farm near Bremen. These had the first indoor self-heated growing systems for all year round fish production. In extension to my apprenticeship, I became a Marine Engineer to develop the technical aspects. I was working on the ocean for 7 Years then went into inland fisheries throughout Germany.

So what brought you to Indonesia?

In late ’89 I came to Indonesia, specializing in Indoor fish farming to build several eel farms (in Bogor, Cicuruk and Sukabumi). Due to the constant temperature, growing of eels was almost twice as fast and cheaper to produce as in cold Germany. On weekends we went to nearest beach looking for glass eels (eels in non pigmented colour 3-5 cm long). Besides enjoying the fresh air, surfing and lots of fun, this business made my decision to live here in Indonesia. I fell in love with this place and decided to stay and make a living revamping fish and shrimp farms on my own, and organized the catching and distribution of glass eels.

How long did you spend working in fish farms?

I lived in Pelabuhan Ratu for around 7 years doing fish farm rehabilitation. The place was booming and I was looking after fishing boats of expats, running fishing diving tours, I ending up building and revamping some boats and houses for them too. Another lucrative business during that time was smoking fish and chicken. All that made enough income to make a good living. The smoked fish where mainly bought by the expats that came to for weekend holidays and turned me to what I am doing now.

How did you get from breeding and smoking fish to restaurant management?

I went fishing with an Australian restaurant owner in Pelabuhan Ratu and we were enjoying the trip but with no luck, we strolled to the old fish market. There were plenty of fish but no buyers so half of the fish had gone bad, except for one huge 15kg Mahi-Mahi. I bought it and said to my friend “When will this place evolve so all this good fish can be used for what they’re supposed to be”, that night I decided to make a new company called Food Evolution Indonesia. I used to smoke this fish and decided to build a new smoker and maybe distribute on a slightly bigger scale. Then I was offered a managing position at a restaurant called “Metro Sky Garden” on the top floor of the German Centre BSD. I realized that this position had all that I needed to make Food Evolution Indonesia go where I wanted.

What were the challenges of taking this position?

Revamping was one thing, at a location on the 7th floor where all previous caterers failed to make a living in 8 years. It was a challenge really, and after 6 months I decided to make a plan to take it over totally, and so Food Evolution Indonesia was finally born. Another six months passed and with the help of a previous co-owner, the business was ours. Now after three years, the business is starting to move in the right direction. We sell fresh bread, smoked fish and meats at a main supermarket chains in Kemang, with other outlets in Trogong, Bintaro and BSD Hypermarkets. 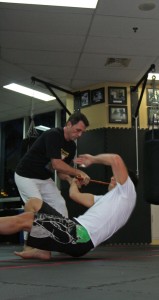 Sounds delicious! I hear you’re one of the founding members of the Combined Martial Arts Academy Jakarta. Could you tell us a little about the academy?

The CMAA was first established in late September 2005 by original founding members Glen Gardiner, Drew Lambert, John Brindley, Jeff Tuttle, and myself. Once a suitable training facility was finally found, the CMAA dojo became a reality at Graha Simatupang on April 1st, 2006. Classes included Zen Goshu Goshin Jutsu, Cacoy Doce Pares Arnis Eskrima (Stick Fighting), and IBF Nakamura Ryu. In November 2006, the CMAA submitted a team of 7 competitors for the Cacoy Doce Pares World Federation 2006 Championships held in Cebu, Philippines, winning 10 medals. I had to stop due to some serious back injury, but still love the sport and continue with some light training.

Apparently you can make Samurai Swords! How did you get into it, and did you make them for yourself, or for customers?

We were at Glen’s house and while he was cleaning his swords I noticed some problems, so I offered to fix it. He joked and said it’s too old to be tampered with but gave me another one to fix instead and I said we should make our own swords. At first everybody thought it was a joke but during my time in Samarinda/Balikpapan I had a friend who started making Katanas (swords) so I had learned a little from him already. After studying on the internet and reading some books, I had some blanks folded with a blacksmith. These were then dressed by me and my long time Indonesian friend and gardener Kadir, to get them into shape. Another friend in the heat treatment business gave us the opportunity to heat them to 980°C. We then quenched them in water which hardens the sword. It takes about 5-10 months to finish one. Now we’ve got about 12 Katanas. I only made swords and knives for close friends; it’s too time consuming to make a business out of it (the price covers the cost). They are priceless to the one that knows how much work is involved.

So any plans to move on from Indonesia, or have you happily settled here?

I have settled already, pretty much. This country has looked after me well. I made many friends, locals and expats alike, travelled a great portion and these provided me with great opportunities, mostly sunshine and always a great smile. There is no plan of leaving as long I am healthy and happy here. I’d like to say a thank you to all locals and expats alike that have helped me over these years to fulfil my dreams and my adventures, and a special Terima Kasih to Indonesia.