Westerners living in or visiting Bali think Balinese parents are irresponsible because they allow their children to ride motorbikes on main roads from the age of about nine, some even as young as five – without training, older pillion passenger, helmet, or driving licence. Well, everybody knows today’s kids are fitter, faster, healthier and more precious than children of previous generations – so why not indulge them with adult toys?

But even they would be surprised to hear of an Indonesian child named Rexy who took a Cessna single prop four seater airplane into the air from John Wayne International Airport in May 2010 at the age of eight and flew for his first time for an hour in some of the busiest airspace in the world and got the ultimate accolade from his flight instructor that day – “you fly better than many commercial pilots do in these light aircraft!”

“Ground Control, Cessna C172 call sign 1234 RV parked at entrance to taxiway NZ requests permission to take off” came the young confident voice over the airway. The ground controller was clearly surprised by the young child-like voice squawking in his earphones. “Repeat that Cessna C172 1234 RV, what is your current position again and, have you filed a flight plan?”

The instructor answers this time and repeats the information Rexy gave the flight controller.

Rexy picks up the story from here. It sounds like it is etched in the young boys’ brain.

“Ground Control now acknowledges our presence with “John Wayne Airport Control to Cessna 1234 RV requesting taxi to the active runway 19R for a straight out departure.” I now came back on air and repeat the instructions back to Ground Control to show I have heard and understood them.”

“I push the throttle to full thrust as we start to move forward, accelerating as we head further along the 1,700 metre runway. At 60 knots/hour, I pull on the steering yoke and the runway begins to disappear; the earth drops away as the angle of the front of the plane climbs at a rate of 500’ per nautical mile for the next five minutes ’til we reach a height of 2,400’. Boy this feels great. I’m actually flying for real now.”

“I followed the instructions to the letter. Controlling an airplane is an amazing experience. The skies in this part of California are real busy with five other major commercial airports, including LAX, within a 20 mile radius of John Wayne. I couldn’t control my excitement.”

“For the next hour I felt like an eagle flying over my home territory; flying over my school and seeing where we lived. Landing, though, was much harder.  Several flights later I felt I really had gotten the hang of it and ever since I’ve been really hooked on flying.” 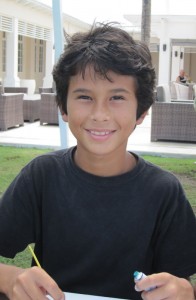 Rexy and his Dad are currently in Bali for a few months staying with his Indonesian mom. His mom moved here last year so that Rexy could attend the Canggu Community School. Unfortunately, the two schooling systems between CCS and Rexy’s school in California are too different, therefore his Dad home schools Rexy using the syllabus, books and materials provided by Rexy’s school district in California. This enables Rexy to work at the same pace while covering the exact same material as his classmates back home.

Rexy tells me he is actually ahead of schedule, never missing an assignment and is doing pretty well. To get an hour’s flying lesson, he has to not only pass an assignment, but get 100% in three assignments in a row! Since being in Bali he has bagged himself another three hours flying time back in California. His grades are always near or at the top for his school and often within the top in California State for his year. What he misses are the sports he would otherwise be enjoying back in California, like little league baseball, riding horses, playing polo.

Rexy is a wiry, 1.5m, 33kg mixed Indonesian-American kid of ten today. The first half of his life he lived in Puri Gading and Solo being cared for there by his grandparents whilst his parents worked away. By his fifth birthday his parents decided his schooling should be mostly in California. For the last year, since his Dad retired, his time has been split more evenly between the two countries. And thanks to the effort he and his father puts into his home schooling, it works remarkably well for Rexy.

When asked what does he think of himself as, Indonesian or American? he answers straight off with “These days I normally think of myself as an American, especially when I’m in the USA, because I’m a US citizen and most of my recent life has been in the USA. But when I’m in Indonesia, I think of myself as Indonesian. I feel I belong in both places, both societies. I am happy wherever I am ‘cos I have such good friends and great people who take real good care of me, especially my mom and dad.”

“What has been your biggest challenge to date?”

“My dad says I spent my “diaper years” in Indonesia. I moved to the US with dad just before my fifth birthday. It was very hard at first. At that time I spoke Indonesian and little English. So starting kindergarten in California was tough because I had to learn English very quickly.  I found I could express myself by drawing pictures of everything I did and saw, which really developed my art skills.”

Finally, I cannot resist asking him how he got to take up flying. 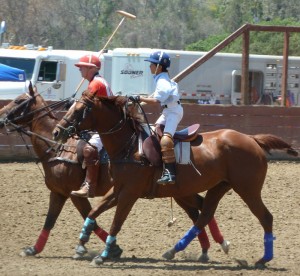 “My dad was a pilot and owned several twin engine airplanes.  One Christmas he gave me Microsoft’s Flight Simulator. I got so good at it he enrolled me in the Aircraft Owners and Pilots Association and even took me to the Experimental Aircraft Association show in Osh Kosh, Wisconsin where I met Buzz Aldrin. My Dad set up some goals for me to meet at school and if I reached them, I could earn myself real flying lessons. I’ve flown about 20 hours so far and only need another 20 to earn a private pilot’s licence. But I will have to wait until I am 17 until I can legally get that. However, until then, all my flying time with a certified flight instructor qualifies me towards any and all license requirements. So by the time I am 17, I may have all my flying time and written exams passed to qualify for a commercial license and flight instructor’s license.”

In the history of aerial warfare there is no man more famous than Manfred von Richthofen, Germany’s first world war ace fighter pilot, known to most of us as the “Red Baron”, who shot down a staggering eighty enemy aircrafts between 1915 and 21 April 1918, when he was shot down over France and killed at the age of 25 in his famous red Albatross fighter plane.

Like the Baron, this boy is no braggart. He is an engaging, industrious, unassuming and very self-assured young man who is easy to get to know. He is very generous to others and with the time he spends with them, always charming, encouraging, and occasionally playing jokes. No wonder my eight year-old daughter is so smitten. This boy would make any parent proud!