It was hot, very hot. Hardly the best conditions for playing football anywhere, let alone a school in South Jakarta offering little in the way of natural protection from the rays. But who lets the weather and all its idiosyncrasies get in the way of a game of football?

Last year, the FIFA World Cup was held in Brazil. The road to Brazil was long and expensive and the festival was the culmination of a two-year journey that began with 207 teams from around the world sharing the same dream. Along that road, the great and good from the world of politics and sport were expensively wined, dined and possibly even seduced before Brazil got the final nod and the football could begin.

The Jakarta Schools Football League (FSFL) has more teams than the FIFA World Cup and a single season lasts just a few short months. In that time, fixture lists need to be drawn up, fields booked, match officials organised and all by a hardy group of folks whose day jobs and families mean free time is at a premium.

Yet somehow the league works and keeps expanding. Matt Wheeler was one of the guys who made the league happen, working tirelessly behind the scenes, so that young people in Jakarta had something to look forward to at the weekend. When Matt was tragically killed in a car accident last year it seemed appropriate that his memory and his efforts were remembered.

On the eve of the 10th season of the JSFL, a special round of matches was held to commemorate the life of Matt Wheeler at the Matt Wheeler Community Shield event.

One of the teams was Singapore School United, or SIS United. Drawn from the SIS chain of schools across Jakarta, SIS has been tirelessly coached by Gareth Jones for the last four seasons. A passionate believer in youth football, Jones doesn’t just talk the talk, he has the badges to prove it. He has an FA license, a Coerver Diploma, Arsenal module 1 and two LMA (League Managers Association) Certificates. He has also helped coach numerous clinics with Manchester United, Arsenal, Liverpool, LA Galaxy and STARBOL, as well as organising JSFL coaching education clinics.

Towards the end of 2014, Gareth had taken his youthful charges to Singapore to compete against academies from around the region and was delighted to see his lads more than hold their own.

With the players spread around the points of the compass in Jakarta, the only time Gareth gets with his players is a weekly training session in Senayan, but even with the new year break interrupting valuable work on the training ground, the coach was confident his team had more than enough in the tank to take on Victory Plus.

With the mercury hitting thirty, Jones had his lads doing some gentle exercises to loosen their limbs ahead of the game. It was all very low-key, an approach Jones carries on into the game itself, preferring to stand pitch-side and watch quietly rather than shouting and waving like many coaches.

With the referee getting ready to start the game, there was time for one final team talk before the coach sent the players on their way. He made some adjustments to the iPad he was using to film the game and it was soon show time. 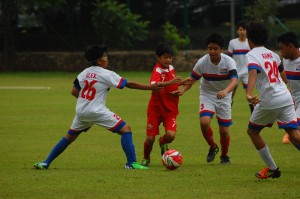 Despite taking a 2-0 lead into half time, Victory Plus rallied in the second half and when the final whistle blew, the final score read 3-3, Victory Plus going on to win on penalties.

“Unfortunately our boys lost a little focus in the second half and we conceded a soft goal before Jing Yao restored our two-goal lead with a good finish past the oncoming keeper. Again, we took our foot off the gas and allowed Victory Plus to play in our half, eventually forcing an accidental handball in the box and conceding another soft goal through a penalty,” said Gareth after the game.

“We picked up the tempo once more, but showed some naivety and left big holes in midfield, trying to force another goal. This allowed the opposition to counter under minimum pressure due to a lack of cover and they won a few corners in the last 10 minutes.

“As a result of one of these corners, we failed to clear our lines in the last minute of the game and it fell to one of their players on the edge of the box who smashed it into the top corner for the best goal of the day,” Gareth continued.

While it was frustrating to be pegged back in such a manner, the coach could perhaps take some relief from the fact that even at the highest level, poor defending in the final moments of a game continue to cost teams points.

As the players considered the rest of their weekend, Gareth knew his work was just beginning. Being a good teacher, he made sure the students had some homework to do. Although disappointed to lose in such a way, the team will be shown video clips and photos of key moments in the game to work on their transition, from attack to defence during their midweek training to prepare for the next game.

“My coaches and I always emphasize performance over results at this age and although there were many positives, we will continue to work on individual and team weaknesses to benefit their development. I am also looking forward to reading their log books, which they use to analyze themselves each week and share their thoughts with the coaches.”

Gareth packed up his iPad and headed for home. His work was not done yet, but for now, at least, it was family time.

If you want to keep up-to-date with the Jakarta Schools Football League, check out their website www.jakartafootball.com

Helpful Tips You Can Use to Boost Your Immunity