In July 1960, Allan Williams, a Liverpool club owner on a trip to Hamburg, wandered into a club off the Reeperbahn, and saw, “an Indonesian group performing Elvis Presley songs in German.”

Williams was involved with rock’n’roll bands in Liverpool who had taken the music a stage further than Elvis, with the booming amplified bass percussion and bronchial vocals of what was becoming known as “Merseybeat”. One of these bands was originally known as the “Silver Beetles”, and in the months to come to Williams factored his groups onto the Hamburg scene, where the Beatles cut their musical and performing teeth, emerging in the next few years as the world’s most famous rock’n’roll band.

But who were these “Indonesian” bands performing in the Hamburg clubs?

They were practitioners of what is still powerfully remembered, especially in continental Europe, as “Indorock.” The families of these young men from Ambon, Timor and Sumatra had been expatriated to the Netherlands as political fallout in the aftermath of the Indonesian Revolution. Stuck in the Dutch refugee camps, bored, they improvised instruments and drew on their own rich heritage of strong vocal harmonies and sophisticated rhythms, applying these to the new exciting sound of American rock’n’roll which was easily accessible on Radio Luxemburg and the American Forces Network radio.

Indorock bands went on to become star attractions in clubs and dancehalls in the Netherlands and Germany, including the US forces’ clubs, not so long after Sergeant Presley was driving a tank there. And far from being blown away by the Liverpool bands, Indorock musicians and singers continued to enjoy European success well into the late sixties.

Ironically, in Indonesia, rock’n’roll music was considered decadent by the Old Order regime, resulting in the notorious prison sentence handed out in 1965 to Koes Plus, the leading Indonesian Beatles-type band.

The keynote Indorock band were The Tielman Brothers, whose leader, Andy Tielman, is known as the “Godfather of Indorock.”  Andy and his five siblings were Indo-European, originating from Eastern Indonesia. They were already popular musicians at the time of Indonesia’s independence, even performing for President Sukarno, but as anti-Dutch feeling spread in Indonesia throughout the 1950s, in 1957 they joined the thousands of refugees relocating to the Netherlands.

In the above quote from Allan Williams, he sounds dismissive of the Indorockers, which is understandable considering he had access to a stable of bands in Liverpool with exciting new sounds which took the music a stage further on than Elvis. But the Indorockers, especially the Tielmans, were far from being copycat Elvis clones. Many, originating from Ambon or North Sumatra, which continues to provide a disproportionate number of Indonesian popular singers, were gifted with fine natural voices. Andy Tielman had a five-octave vocal range. And if you think Jimi Hendrix was the first rocker to play the guitar behind his back, check out the Indorock Godfather on YouTube. Furthermore, Indonesians have been familiar with the guitar, the boss of the instrument of rock’n’roll, ever since the Portuguese introduced it in the 16th century. 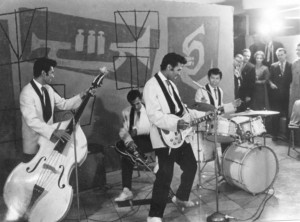 The Tielman Brothers became the highest paid live act in Europe, but there were actually hundreds of Indorock outfits. It seemed that every town in the Netherlands had its Indorock band. Andy Tielman himself escaped to the jungles of Kalimantan to live as a hermit for a while but came back to music. He was awarded a royal decoration, the Order of Orange-Nassau, by the Netherlands in 2005. He kept on performing until he died at the age of 75 last year.

While Indorock’s popularity remains high in the Netherlands, what about Indonesia? Enter Awan Garnida, Indonesia’s Paul McCartney, who plays left-handed bass guitar and is involved in three bands: Sore (contemporary eclectic rock); G-Pluck (Beatles tribute), and now the Time Travelers, whose mission is to revive and foster Indorock. The Time Travelers line-up spans the generations, as it includes Rio Dalimonthee, one of the original Indorockers, now re-domiciled in Indonesia, on lead guitar, and Pepeng, from the contemporary band Naif, on drums.

And so we come to the “reconciliation” potential of Indorock. There is no nation on earth which has not perpetrated crimes or atrocities against other peoples. Reconciliation – “forgive but don’t forget “– is taking place all over the world, and has to if we are to manage this earth in harmony. Having worked in Timor Lorosae just before independence, I was amazed at the Timorese, and the Indonesian, capacity for forgiveness. And the popularity of Indonesian artists like Ebeit G. Ade and Sheila on 7 were a constant reminder that music heals where politicians and their corrupt cronies wound.

Music is a most potent force for reconciliation. And heaven knows, there are enough tragic incidents in the 400-year interface between Indonesia and the Netherlands to try and come to terms with. And here it would be inappropriate for a Brit like myself to even begin to be judgmental.

However, in the case of Indorock, we need to recognize that:
•    The Indorockers who fled to the Netherlands as refugees in the 1950s were in the main innocents who were torn between their two heritages.
•    In Europe, they found the freedom to play the music they loved and won the love, respect and admiration of European audiences.
•    Meanwhile, in Indonesia, rock’n’roll was banned by an increasingly authoritarian regime.
The Indorockers never denied their Indonesian heritage; on the contrary, this enhanced the quality of their music and is still a factor in the enduring popularity of Indonesian culture in the Netherlands.

So let’s hope Indonesia can acknowledge its native sons and daughters, who produced this child, Indorock, born in Indonesia, fostered in the Netherlands, and given to the world as a unique contribution to the history of rock’n’roll, and, with its blending of western and eastern elements, world music.