We all got to know this easy-going man starting from his early years in Indonesia back to 1997, until being the man behind one of Jakarta’s first bars for westerners to dine and unwind. Indonesia Expat had the chance to catch up with Lens, talking about fatherhood and flash floods. Check out this video for the full conversation.

Below is the fist time Lens spoke with Indonesia Expat

Lens, I’m sure many of your patrons would like to find out more about the man behind the face. Tell us the true story of how you ended up here in Indonesia in 1997.

Well, I decided to take my CELTA (English Teaching Certificate) at TBI in Jakarta. The initial idea was to teach and travel my way around Southeast Asia for a few years. When I passed the course however, TBI offered me a job and so I stayed and never left. Jakarta can quite easily suck you in like that.

How did you go from teaching English to managing a very successful pub in 2006?

When a small Dutch bar called BuGils opened in Taman Ria Senayan, I’d finally found ‘my local’ and I soon became a (very) regular customer there. In fact, I became so regular I started to get asked to look after the place when their manager was away on holiday. In return for this, I’d get free beers, which was great because I love beer and my teaching salary was hardly enough to pay my BuGils bar bills. After a few years of sitting at their bar, the manager asked me if was interested in joining him to take over the Eastern Promise (EP) in Kemang. At first, I combined the teaching and setting up EP, but after one exhausting year I said farewell to the former and I never looked back.

You have one of the most social jobs there is. What’s the hardest part of being a bar and restaurant manager? Would you recommend your job to any of our readers?

Working many evenings (including weekends) is starting to take its toll a bit as I get older. Most nights in EP are quite lively and a lot of the customers are also my friends, so it’s hard not to have a drink. Yes, that is definitely the hardest part! But I love my work and maybe I was cut out for it. From the start I was given a lot of freedom to implement my own ideas and run EP ‘my way’. I never had any proper training for this kind of work but it ain’t rocket science and I learned by doing. I am still learning. Besides being sociable I guess it’s important to be flexible and a little creative. Stay on top and ahead of things and love your customers! Would I recommend this job? Sure!

For those readers who haven’t heard of your establishment, could you give us a bit of background information? When did it first open, who is behind it, what do you provide your guests, etc.?

Eastern Promise was established in 1989 by Carl Gilchrist. Carl was a pioneer who opened the first bars for westerners in the early 70s with names like The King’s Head, George & Dragon and The Eye of the Wind (in Ratu Plaza). In 2006, the BuGils Group took over management of EP after Carl had fallen ill and was forced to move back to the UK. However, his legacy continues. EP’s famous British curries come from Carl’s recipes. The original chef, Pak Heri, still works here and most of our curry guys have also been here over 15 years. Our delicious chicken and mushroom pie is named after Carl. Another thing we do rather well is sell beer, including Guinness & Kilkenny draught. On Friday and Saturday nights, our beer garden is packed for the live music and our separate sports bar is very popular for watching live EPL, AFL, rugby, Dutch football, cricket, etc. We do our best to offer something for everybody. We also have darts, two pool tables and even a kid’s playroom. For many people EP is their local, just how BuGils used to be mine. I am quite proud of that and I wish to thank all the wonderful, loyal staff and the many regulars throughout the years for keeping us ticking and for creating such a fine buzz.

Tell us the funniest story you can recall from one of the nights at Eastern Promise.

A lot of our nights end with people dancing on the bar. Things can get pretty wild sometimes and a lot of funny, crazy stuff happens. You know, we’ve had our (un)fair share of floods at EP and it is definitely funny to see how some of our regulars continue to come to the pub despite the ‘high tide’, even if it means they have to take off their shoes and pants, use gerobak, and climb neighbouring walls.

Your pub offers the renowned ‘Pressure Hour’, whereby patrons can enjoy free-flow beer for an hour on Friday evenings, so long as nobody leaves the room or visits the toilet (and your regulars are pretty serious about this). How did you come up with such an idea?

The idea came from one of our regulars and especially in the early years it helped put us back on the Jakarta pub scene map. Often newcomers to Jakarta had heard about ‘that crazy beer promo’ before they knew about EP. We have now done over seven years of Pressure Hour and not one is the same. We’ve even had customers use FBI crime scene tape to close off the toilets and bar exits to stop people from ‘breaking the pressure’! 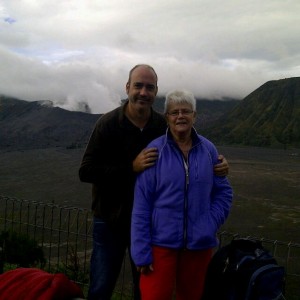 You’re quite the creative event organizer. Your last anniversary party was a massive 25-day-long celebration. Tell us a bit about it and what do you have in store for your 26th anniversary?

Well, our 24th anniversary last year was a 24 hour event, so it seemed only logical to celebrate 25 days long this year. We gave away 25 barrels of Bintang, we had beach parties in our parking area and special ladies and quiz nights, among others. Also, like the previous year we had patrons join a challenge to come here for 25 consecutive days and drink (at least) one Bintang on each visit. All participants were given a personal stamp card. We had 10 winners (survivors) who were given a 25 million bar credit to share, as well as a visit to the Multi Bintang Brewery. Next year? 26 weeks?

You’re the assistant coach of the Bugils Football Club. Tell us more about this.
We play in the JIFL and compete with 11 other expat teams almost every Saturday. BuGils players are usually recruited in the pub, but interested readers can also send me an email. We sponsor two teams in the league. The other team, the Lions, still need players. Neither team really train but some of the guys play futsal on Tuesdays.

What would you say is the best thing about life in Jakarta?

It never ceases to surprise me.

If you were stranded on a deserted island, what three things would you bring with you?

A beer, a deck chair and a hat?

Thanks, Lens! To get in touch, please email: [email protected]