Jokowi – what better buzzword these days to begin any piece of writing about Jakarta. Let us hope that Scott Merrillees will present a copy of his recently published visual record of Jakarta’s history, (together with its predecessor Batavia in Nineteenth Century Photographs (2000)), to our new Governor, on whose baju kotak-kotak so many hopes are pinned.

“Problem-Resolution-Problem-Resolution…” is how primary schoolteachers introduce their students to the linear analysis of fairytales. Then, sooner rather than later, we educators introduce, or should introduce creative, holistic and lateral thinking, for problem solving, with the underlying and inspiring assumption that for every problem there is a solution.

What has this got to do with a review of a book which is basically a collection of old postcards? Come on, what is the hugest problem Pak Jokowi has to face? Yes, Jakarta’s urban transportation. And what do we see on the cover of Scott’s book? Not an old building, not an exotically posed group of natives or colonials, but the equally exotic and ingenious “steam tram”, circa 1925. “The …trams were propelled by compressed steam that was fed into the large metal cylindrical chamber located at the front of each tram. This was preferable to burning coal on the tram itself because of the heat this would create in Jakarta’s already tropical climate…” (p168). So here on the cover we have this direct descendant of Stephenson’s Rocket heading along what is now Jl. Gajah Mada, past dokkars and pedestrians in tropical whites, with the driver proudly poised over a placard promoting BOLS. The nature of the problem was different then, but they solved it with science and ingenuity. Now it seems apparent that our new governor has the vision and cojones to research and implement similarly bold but contemporary solutions to our viral traffic problems.

From Bruce Emond’s interview with Scott for Jakarta Post Weekend, we learn that Scott is a survivor of the 2009 Marriott bombing. Wounded in body but not in spirit, his love of Indonesia transcends the “idealism” of the bombers, (whose flawed psychology was already laid bare as early as in 1907 by Joseph Conrad in The Secret Agent.)

Kendisan Kusumaatmadja’s piece for Tempo is a haunting and personalized reaction to the book from the perspective of a young inhabitant of the city, demonstrating that nostalgia is still what it used to be. 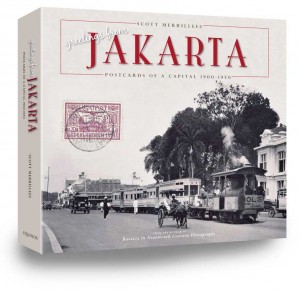 So let’s get bibliographical. Greetings from Jakarta presents a collection of 460 postcards, all numbered, depicting aspects of Batavia/Jakarta in the first half of the last century. Each card has a caption which gives the title/subject/location, the publisher, and the (approximate) date. The main section is divided into three “chapters”: 1900 – 1920 – The Old Jakarta in the North; 1900 – 1920 – The New Jakarta in the South; 1920 – 1950 – The End of the Colonial Era. Here each postcard has an accompanying paragraph which provides thoroughly researched and often fascinating background information.  Each chapter begins with some pages of relevant history, and original maps.

The location of nearly every postcard is marked on the maps!

For a map lover like myself, the inclusion of these thoroughly detailed classic old street maps is alone worth purchasing the book for. Google Earth, spit your chips out!

There are three appendices: “People, Work and Entertainment” with 66 postcards focusing more on people than places; “The Earliest Picture Postcards of Jakarta”, comprising 32 examples of “Groet uit Batavia” from the 1890s; and a guide to colonial street names and their post-colonial equivalents.

Researchers and librarians will appreciate the 62 books listed in the Select Bibliography, which as good a starting point as any for investigating the history of Jakarta and beyond in the relevant era.

Kendisan Kusumaatmadja in her Tempo piece has the inspired device of selecting one of the 460 postcards (no. 295) and subjecting it to some atmospheric analysis. I will attempt to do the same with one of my favourites (no 112) which shows “seven well-dressed gentlemen enjoying the hotel’s popular reading room”. This is obviously a posed publicity postcard, from circa 1910, for the old Grand Hotel Java. Five of the “gentlemen”, immaculate in tropical whites, are catching up with the newspapers, which would take weeks to arrive from Europe. Note the solar topee, panama hat and boots. Another is reading what could be the latest novel by Louis Couperus, but is probably a bound copy of the equivalent of Readers Digest. One man, a naval or merchant marine officer by his epaulette, sits apart. Checking on the progress of the Panama Canal, or doing the crossword? On the walls are a poster, pictures of a steamship and a train, what could be a Rubens reproduction (it’s not clear) and what could be a mounted display of postcards, which would probably cause sleepless nights to more obsessive deltiologists* than Scott. You will have your own favourites, when you buy this book, as I urge you to do. It’s a lovingly compiled tribute to a fascinating and often misunderstood city, by a man who has spent countless hours in the heat and pollution so that he could actually occupy the same topographical space as the postcards. Jakarta-based corporations, here is a prime showpiece for your guest reception area, here is the gift for your worldwide clients.

We began with a buzzword, so let’s end with another one. Much of the credit for the outstanding quality of the book’s layout and appearance goes to the pioneering publisher, Mark Hanusz, and his company, (synchronistically, as I started writing this review on September 22) – Equinox.

*deltiologist – you will have sussed out that this has nothing to do with Mississippi Blues or wetland ecology, but refers to a practitioner of the world’s third most popular collecting hobby (after stamps and coins).

Scott welcomes relevant comments and other information as well as news of any other postcards of Jakarta not appearing in his book. Contact him at [email protected]

Komunal 88 – Sustainability is Good for Business

An Expat Guide: Having a Baby Naturally in Jakarta