Bring out the bikinis and heat up the barbeque grills- it’s that time of the year. Throughout summer, our buddies in the U.S. throw BBQ parties, while our pals in Europe may have made plans to work on their tan at the beach. Unfortunately our teman-teman in Indonesia deal with a different kind of summer experience; forest fires and its negative effects.

In this part of the world, the dry season is synonymous with intense forest fires, especially on the islands of Sumatra and Kalimantan and has become an annual problem for the nation.

Forest fires can be caused by either human greed or forces of nature. Many large Indonesian companies resort to fire as a cheap and fast method of land clearing. What initially started as a small fire to clear an area often escalates into uncontrollable disasters as the dry land and vegetation causes the fires to spread quickly. Increased felling of tress by timber companies also contribute to the fires as logged forests are more susceptible to fire than unlogged forest, due to debris left on the ground after logging. Furthermore, logging opens up the canopy, allowing more sunlight to enter; drying up the forest floor in the process.

Fire needs fuel, oxygen, and heat to survive. In forests, the fuel is provided by trees and vegetation; oxygen is all around us in the air and the scorching summer heat provides the final ingredient to intensify forest fires.

Riau, a province in Central Sumatra often plays host to the highest number of fires. In June, 44 of the 80 hotspots in Sumatra were in Riau. The drought in Riau is expected to last until September. Until then, temperatures are expected to remain high as it is a time when hotspots sparked by forest and peat fires will start to appear in increasing numbers.

While forest fires may remain a domestic affair, the haze generated from these fires is not. Strong winds carry the haze into Singaporean and Malaysian airspace quite frequently, leading to the closure of schools and diversion of flights, if the situation warrants. Jakartans are not spared either, my advice would be to drink lots of water and invest in a SWAT-team gas mask. 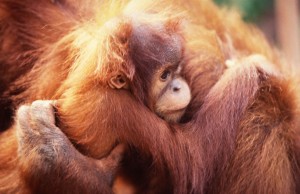 Experts suggest that fires raging in Sumatran forests have killed a third of the rare Sumatran orangutans living there, not to mention the tigers and sun bears. “It is no longer several years away, but just a few months or even weeks before this iconic creature disappears,” says Ian Singleton, conservation director of the Sumatran Orangutan Conservation Programme.

When burnt, trees and other vegetation, which in fact plays a role in balancing carbon in the atmosphere, contributes significantly to the amount of carbon released into the atmosphere; hence the issue of global warming. Indonesia is currently the 3rd largest producer of greenhouse gases in the world. Reports indicate that Indonesia has lost umpteen hectares of forest every year for the last ten years due to agricultural expansion, illegal logging and forest fires.

Governments of neighbouring countries and from nations as far as the UK and Norway have often initiated discussions to convince President SBY’s ruling party to enforce stricter laws and keep the trees standing. Indonesia has a long history of weak and unenforced laws with regards to illegal land clearing by palm oil, mining or timber companies.

The cooperation between the ministry of forestry, agriculture and the legal system to tackle the problem must be improved. Firstly, the use of fire for land clearing which involves large areas, especially during the dry season, must be prohibited and properly enforced. The establishment of more powerful legislation to tackle forest fires is needed. Existing laws are not adequate to stop and punish companies or people who cause forest fires. To complicate matters, Indonesia has three contradictory laws pertaining to forest management — the 2004 Law on Regional Governance, the 2004 Law on Fiscal Balance and the 1999 Law on Forestry.

In order to anticipate and reduce the risk of forest fires, the government should invest in the latest satellite imaging technology that can quickly supply information on land and vegetation condition changes, which could provide real time information on forest-fire risk levels.

NGOs such as WWF-Indonesia plays its part through awareness campaigns on fire prevention and training on fire suppression to the local communities who are also briefed on the reporting mechanism in the event of a fire.

It saddens me that a half-century ago, more than three quarters of Indonesia was blanketed in plush tropical rain forest. But half of those trees have been cleared in the rush to supply the world with pulp, coal, paper, palm oil and other commodities.

With the possibility of prolonged dry seasons and climate change in the future, the threat of forest fires will also become more serious. It is certainly not an easy task, but effective measures have to be taken immediately. We hope the various stakeholders can work together to keep the forests and the wildlife safe. It’s the least we can do for the orangutans; they are mankind’s closest animal relative after all.