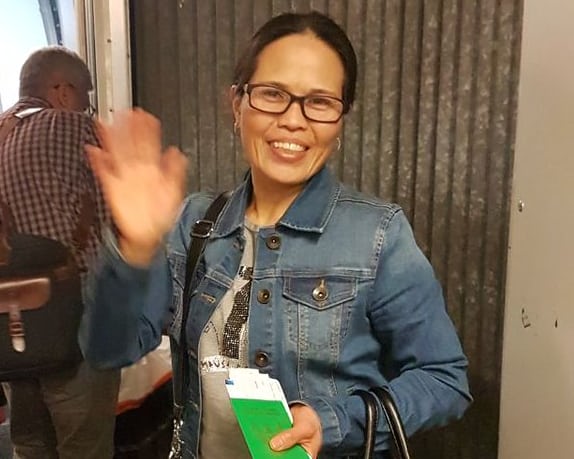 An Indonesian woman kept as a virtual slave by a family for almost two decades has returned to Indonesia after being rescued by the Metropolitan police’s modern slavery unit.

50-year-old Parinah Iksan Binti Dullah arrived at Soekarno-Hatta international airport in Jakarta on Wednesday, having first left Banyumas in Central Java in 1999 to take a job as a domestic worker in Saudi Arabia.

At first she was able to communicate with her family, but when her employers relocated to Brighton on the south coast of England in the early 2000s she was subject to more stringent controls.

Dullah was banned from leaving the house unaccompanied, was not allowed to contact anyone outside of the house, and was not paid any salary.

The Indonesian domestic worker says she repeatedly asked to be paid by her employer and to return home, but was told the money was being kept in the bank, and she would return home “later”.

“Hopefully my case can be an example for other female migrant workers. They must be careful, they must be vigilant if they want to go home and their employer says ‘later’,” she said, as reported by Tempo.co. “Everything must be clear. Do not be like me.”

After years in slave-like conditions, Dullah managed to sneak out of the house alone and send a letter of distress to her family in January. Before receiving the correspondence, her relatives in Java had not heard from her since 2005.

When the embassy contacted the family holding Dullah, they refused to release her, prompting them to contact the Met’s modern slavery unit, which picked up Dullah in Brighton this month.

Dullah’s three children reportedly wept as they greeted their mother when she arrived in Central Java on Thursday morning.

Photo courtesy of The Indonesian Embassy in London.