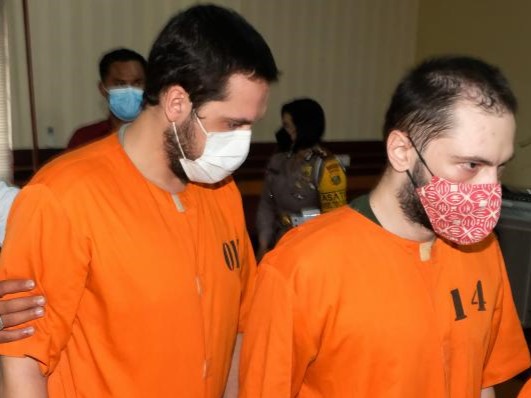 The Denpasar District Court has tried two foreigners for a robbery that took place in Kuta, Bali on Tuesday 9th August 2022.

In his ruling, the judge stated that the two defendants violated article 365 paragraph 2 1, 2 and 3 and article 56 2 of the criminal code.

A few months ago, both of them were arrested for carrying out a robbery at a villa in the Kuta area. The victims were a husband and wife from Italy, Principe Nerini and Camilla Guadagnuolo and the attack was on 11th November  2021 at 3am local Bali time.

During the robbery, the two defendants were assisted by two of their friends who are currently fugitives; Mateusz Mariusz Morawa and Brend Stefan Stade. They entered the villa and headed straight for Principe Nerini’s bedroom.

Shortly after entering the property, the perpetrators beat the victim repeatedly in the face and left eye. One of them also pinned the victim down with his feet while the other covered the victim’s mouth and eyes with black duct tape and tied their hands and feet.

Four cell phones, four laptops, and one camera along with eight lenses were all also taken. Inside one of the cellphones, there was a wallet containing bitcoins and digital money valued at US$552,863 or equivalent to to Rp 8.2 billion.

Responding to the verdict given by the Judge, the two defendants asked for time to think about filing an appeal, which the judge was willing to give for the next seven days.