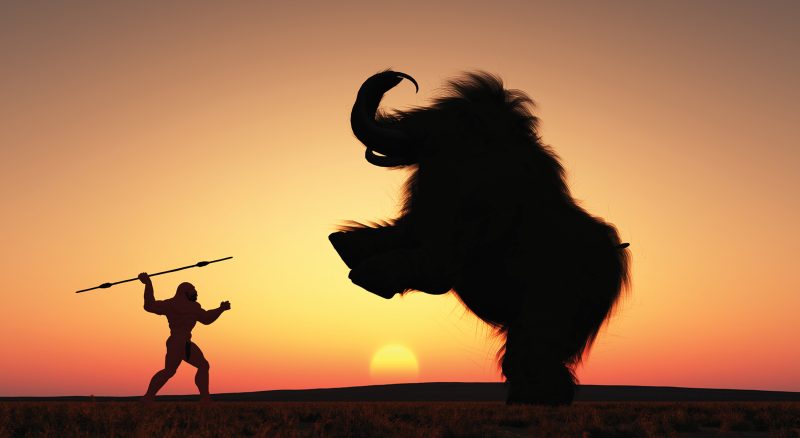 Back at the dawn of human evolution men were simple hunter-gatherers. There was nobody to teach the Cavemen how to hunt and gather, so they learned how to do these things themselves by a healthy and enjoyable process of trial and error. Young men ran about in the fresh air giggling and throwing rocks at tasty-looking animals until they eventually got hungry enough to think of better ways to kill them. Of course, these young Cavemen eventually became Cavedads (they instinctively knew how to do that) and gave their Cavekids the benefit of their experience, teaching them how to bring down a Tyrannosaurus Rex without becoming food themselves. Cavedad could then sit under a tree and relax while his Cavekids happily went out and bagged dinner. And that’s where the problem started.

With the rise of agriculture, the Cavekids of ten thousand years ago became the natural labourers for Cavedads. Frolicking about in the bushes and killing dinner became a thing of the past, and long hours at the plough became the norm. Hunting and gathering required knowledge and skill, but not a great deal of hard work. Long hours at the plough required a great deal of hard work but not a lot of knowledge and skill. This was perfect, simple work for young uneducated people, while their dads and bosses sat under trees and got wasted on the beer they just invented. This new-fangled agriculture also meant that the clever man built permanent dwellings in which to live while his offspring – and those of other less clever people – tended his crops. This meant that for the first time the cleverer man could accumulate property and therefore wealth rather than chasing food around the countryside with nothing more than the spear in his hand and the cloth on his loins. Obviously, some accumulated more wealth than others and over the millennia the majority “have nots” became increasingly dependent on the minority “haves” for their jobs and income, giving the “haves” a great deal of power and forcing the vast majority of people into a life of hard labour, servitude and obedience.

Fast forward to the industrial revolution, and guess who had the financial means and resources to take full advantage of the new technologies? The same people who made their fortunes in the agricultural industry of course. So now armies of adults and children with no other choice went to work for pitiful pay in the squalour of the new factories (this remains the very sad case in many developing countries to this day – Indonesia is one of them). This type of work required some reading and writing skills and some basic mathematical ability, so these things were taught as part of the job training. But as industrial processes became more automated, less children were needed and, now that hunting and gathering was dead, the idea spread that childhood should be a time for learning about the world from the increasing number of knowledgeable scholars (most of them religious). Schools sprang up (mostly run by the church) and geography, science and (versions of) history etc joined the curriculum, all made possible by the ability to read and write. Learning, knowledge and qualifications became the requirements for a better job and a better life, and that’s how the situation remains to this day.

But today, in the age of modern technology, do our children really need to know about geography, science or history etc? Or do they just need the ability to read and write and the ability to process information, draw conclusions and make decisions? Because if they can do those things and they have an internet connection (which they now have in their pockets), they can know everything they need to know as and when they need to know it, and they no longer need to store massive amounts of information in their brains and regurgitate it during examinations. Surely all the information we need is now readily available in “the cloud” and we just need to know how to understand and use it. So, are we wasting our time and money on schools and clogging up our kids’ brains with unnecessary information when all we need to do is teach our kids how to read and write and Google? After that they could learn the specific skills required for their chosen careers. We could have fully qualified 15-year-old architects, doctors and lawyers who just Google the answers for the pub quiz and get off their parents’ pay roll much sooner. It would also be the death of the TV quiz show which is surely reason enough.

All I can tell you is I knew nothing about the history of education until two hours ago – and I didn’t need to. Don’t let your kids read this!