From earthquakes to cyclones and tropical storms, landslides, volcanic eruptions, floods, and avalanches, no nation is immune from the threat of natural disaster. Early warning systems attempt to assess risk and reduce threat to life, property and general environment, by pulling together the available scientific research.

Meteorological surveys, geological surveys, and satellite monitoring can be combined with historical records of past events and statistical modeling of current probabilities to give detailed early warning information for many natural disasters. Slight changes in the environment will often alert scientists and officials to a potential real time threat. But even with the most sophisticated early warning systems available today, exact hazard predictions will always be difficult because some events simply cannot be predicted.

I see three major disaster events that could happen in Indonesia and would like to be warned before they take place. The so-called early warning system can warn us of upcoming natural disasters such as tsunamis, earthquakes and volcanic eruptions.

You can receive early warnings for tsunamis and earthquakes on your hand phone although I must say that I think for earthquakes the name is misleading as it does not warn you when the shaking begins. Unfortunately I was not able to find anything on an early warning system for your mobile in the event that a volcano in your backyard erupts, but perhaps the smoke plume on top of the volcano could be an indication that something is about to happen.

How does the Tsunami Alarm System work?

When a tsunami alarm is sent to subscribers, it is particularly important that it does not go unnoticed, therefore three back-to-back SMSs are sent. The Tsunami Alarm System reliably ensures that subscribers and other people you may want to warn can apply life-saving measures several minutes before the arrival of a destructive tsunami. 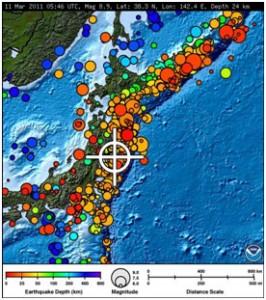 Although the name suggests that this system will warn before the earthquake starts, most of the systems that I have investigated are more notification systems than early warning systems. When a massive shallow earthquake hits below land, the shaking will be almost simultaneously felt together with the alert sound of an early warning app or tool, as there are usually only a few seconds in between both waves at short distances. Measuring the alert and redistributing an alert signal will at least need some seconds. Further away from the epicenter (from 50 to several hundred km) the time in between the alert and the time the shaking starts can be used to take cover or to follow the approved evacuation methods.

But remember, early alert systems DO NOT predict earthquakes. You can find these programs in every online store such as BB/ Android and iPhone.

Especially in Indonesia, during our daily lives we will be confronted with smaller hazards than earthquakes and tsunamis, such as air pollution, traffic jams and heavy rain fall. There was an electronic board nearby the Gambir train station which highlighted the quality of the air. It is not working anymore but I think this kind of information would be great to have.

You can find Information on traffic on the web such as www.macetlagi.com  and www.kemana.com. Both websites will give a screenshot of the condition of the road.

Heavy rain and consequently banjir (flooding) in a city that almost came to a complete stop, I can only wish that IT could solve this problem as no one wants to get stuck in his car 2km away from his home for more than three or four hours. Unfortunately we have to deal with these daily problems, but as said before the mobile industry has some early warnings systems in place to help us cope with one or two of them in an easier way.

And on that note I will say keep safe.

How to Apply for EU or US Citizenship

Citizens of Japan, Korea, Australia, India and China with a KITAS can now enjoy a special offer by DHL!