In this sick and twisted world, there is an elite group of the most sick and twisted countries. Adding a new layer of twistedness to the tragedy of the existence of such countries, there are hockers of gawkers: those who are turning a profit on bringing shamelessly curious tourists to the edge of these tragedies. And then there are the tourists themselves: those who are willing to pay for the experience of going to the edge and gazing into the horror from afar, and yes, I am one of those people. I couldn’t resist the gravity of such an opportunity: go to the precipice of one of the greatest despotic horrors of our time. 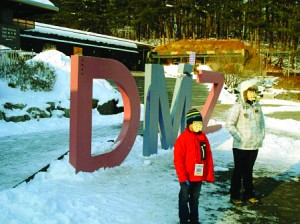 The DeMiliterized Zone (DMZ) is a two-kilometer wide squiggle, generally along the ‘38th Parallel,’ which divides North from South Korea. It was established as part of the armistice agreement in 1953. To this day, the two sides are technically still at war. Within the DMZ is a very small section called the Joint Security Area (JSA). This is a common area managed by both the North and South, the United States and the United Nations, where all parties are present, brush shoulders with each other, share and provide security for a neutral meeting space. Despite all the “security,” people have been murdered inside the JSA. It is the site of the 1976 “Axe Murder Incident.”

Strangely enough, the DMZ has become a good, old-fashioned tourist attraction for both sides of the border. This made the defection of a Soviet citizen possible in 1984.

The tour started with boarding a yellow bus with a bunch of other people seeking the experience to look across the border, catch a glimpse of the horror and get the t-shirt. In mostly American good company, college-students, service men and women and random people like myself are drawn to the edge of tragedy. Many companies organize tourist trips to the DMZ/JSA, but this one is run by the United Service Organizations Inc., a nonprofit organization that provides programs, services and live entertainment to U.S troops and their families, so there was a very American, red-white-n-blue apple-pie flavor right from the get-go. 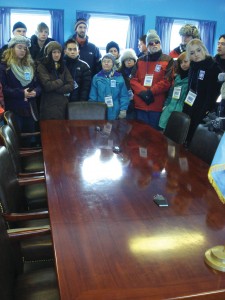 From Seoul, it’s a little over an hour’s drive. Our first stop:  “The Third Tunnel”. After the obligatory mini-museum of dioramas and mannequin displays, we all donned our hardhats and descended into the tunnel. Dug by North Koreans then discovered by the South and walled-off.  Should the North attempt to use a tunnel like this to invade, the tunnel could be flooded.

‘Exit through the gift shop’: Before getting back on the bus, the crowds were helplessly drawn into the first of many gift shops we encountered. Wearing make-up and fur coats, well-fed ladies picked through their choice of flavored junk foods while thousands of people starve on the other side of the border. The mind-boggling reality is almost impossible to stomach. And who am I to judge?  I’m right there in the middle of it.

Next stop: an observation deck complete with coin-operated telescopes; our first real glimpse into North Korea. The atmosphere was careless, carefree and festive. The giddy tourists gasped at distant snow-covered mountains to the north. There it was, the other Korea, in the distant smoggy winter haze. South Korean soldiers pretended to not know English. Everyone wanted to have their picture taken with them and the backdrop of real-life tragedy. We could see “Propaganda Village” with its super-high flag pole on the other side. 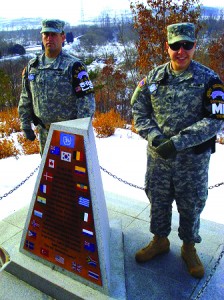 Then things got serious: what we’ve all been waiting for. People were silent.  We entered Camp Bonifas. This was the gateway to the JSA, where we, wide-eyed wacked-out wanderers, would be sharing the same air with real live North Koreans. We were ushered into a large theater and signed legal waivers then watched a short film of the history of the JSA which had no lack of good ol’ God Bless America and stoked the fears of a mass invasion by the North. After the film our orientation was conducted by a U.S. serviceman who was polished and professional except for his tendency to make insulting remarks about North Korean soldiers. This was the first of a few times we were instructed to make no gestures towards the North Koreans and to remain quiet within the JSA.

We then boarded a U.S. Army bus to be taken into the JSA. Such an incredible amount of time and resources provided by U.S. taxpayers by way of the U.S. Army: why does the U.S. government go out of its way to facilitate twisted tourism in a war zone? Puzzling to say the least. It’s a tremendous liability firstly, and that with a huge price tag.

After again getting strict instructions to not attempt to communicate with anyone across the border, we exited the bus, walked through the “Peace House” and filed out two-by-two onto the stairs overlooking a series of blue buildings on the border separating South from North. We were able to look over above these buildings to a similar set of stairs up to a similar building on the other side. At the top of the stairs was a lone North Korean officer standing attention and staring back at us. We were allowed to take photos of anything in front of us, the U.N. buildings and North Korean side, but we were prohibited from turning around and taking photos of the South Korean side.

Then came the climax, the one thing I really wanted to do: we walked down the stairs and into the U.N. Conference Building. The building straddles the border. I was the first member of my tour group to walk in. There were three South Korean soldiers inside standing in “Rock Ready” attention, a modified Tae-Kwon-Do stance used by South Korean soldiers serving within the JSA. Then our American Army officer informed us that those of us on his left were technically in North Korea.  The tour group was allowed to wander around, take photos, look out the windows, and luckily I was able to resist the North Korean mind-control and brain-washing. Eventually we all filed back onto the bus.

From there we went to an overlook where we could clearly see “Propaganda Village” and we were “surrounded on three sides by North Korea.” While on the bus we passed by the monument on the 1976 “Axe Murder Incident” site and the famous “Bridge of No Return.”

The last sight of the tour was boring in comparison: a train station that connected North with South. But the museum dedicated to the history of the JSA was fascinating. It details all the bizarre and sometimes horrific events that have taken place inside the JSA. We were hustled out the door, back onto the bus and on our way back to Seoul. The tour was over. There had been no dramatic confrontation, no breakthrough in diplomatic relations, no communication and not even any human interaction with North Korea. But now the tourists could go back home to their well-stocked refrigerators and warm beds. They had been sufficiently entertained and excited, much like a sad trip to a zoo.

Is Bali Ready to Welcome Foreign Tourists in September?