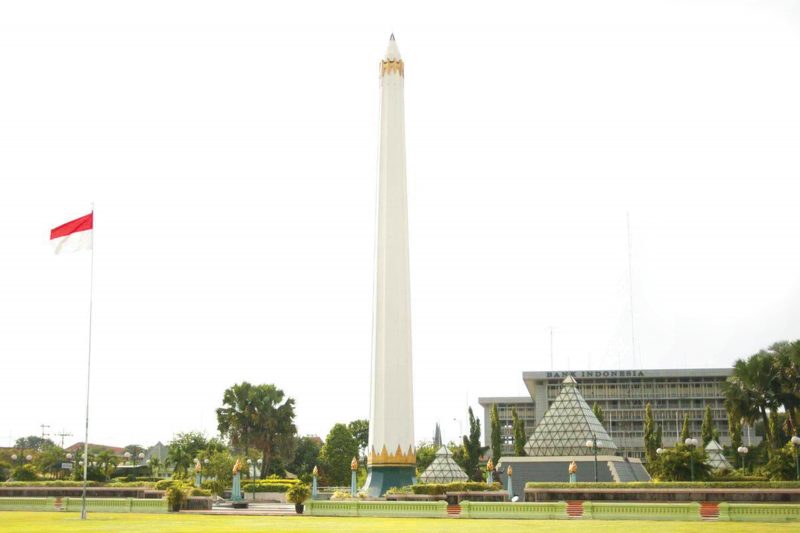 Have you ever wondered why Surabaya is nicknamed the City of Heroes? Well, here are two historical places in the city which were built to commemorate the struggles of some of Surabaya’s heroes.

Tugu Pahlawan is a symbol of our proud city and dedicated to the noble heroes who died on November 10, 1945. There is a museum on the site which displays artifacts, such as guns, uniforms, perfectly-scaled dioramas and sacred scrolls which were used during a fierce battle with the Dutch. The historical monument took ten months to build before its official opening on November 10, 1952.

It is hard to miss the 41.15-metre-tall memorial tower when travelling in the centre of Surabaya. Interestingly, this monument stands on the site where the Japanese occupation era Gedung Kenpeitai and the Dutch occupation era Gedung Raad van Justitie (a court office) used to stand. The first stone in the foundation of this building was laid by Soekarno, the first Indonesian President, accompanied by the then mayor of Surabaya Doel Arnowo, on November 10, 1951.

Tugu Pahlawan was built for the public but do take note that visitors need to be appropriately dressed. The opening hours of the museum are from 8am to 4pm. The garden and the grass field are open to the public even after hours. At certain times of the year there are parades, such as the Parade Bunga (flower parade) in early May and the Parade Budaya (cultural parade) in late May, which start from the field in front of the museum and travel to Surabaya’s downtown area. Every year a show is performed on the monument grounds to commemorate how the people of Surabaya forgot their differences and worked together to win Indonesia’s independence. This show is a local favourite and nearby roads are closed due to the massive audience it attracts. If you are in the city, do make time to attend this show and you will be amazed by how patriotic Indonesians are.

Tugu Pahlawan was built not only to remind us about Surabaya’s turbulent history, but also to prove to us that the November 10, 1945 battle really took place and commemorate the bitter sacrifices that were made by Indonesian heroes. All Indonesians should be proud of the fighting spirit, dedication and strength of national heroes like the Arek-Arek Suroboyo, the “teenagers of Surabaya” who assassinated the British Brigadier Mallaby on October 30, 1945.

A Piece of Naval History Ever been in a submarine? The Monumen Kapal Selam, (abbreviated to Monkasel) is a decommissioned Russian submarine from 1952. The submarine has a torpedo room, a lounge and a navigation room with a periscope. There are also rooms for the submarine crew, including bedrooms and dining rooms, and rooms for submarine control, which include the engine room, an electrical room and an additional torpedo room for defense.

Monumen Kapal Selam is a submarine presented by the Soviets to the former Indonesian president, Soekarno in 1952 to help Indonesia drive the Dutch out of Papua. It remained in service until January 19, 1962. The submarine is called KKM KRI Pasopati 410 SS. It was mainly used during raids. This was also seen as a gift from the Soviets due to Indonesia’s good relations with them. After its use for West Papua’s liberation, KKM KRI Pasopati 410 played a major role in maintaining national maritime law. The submarine was placed in Surabaya permanently to be used as an educational monument, providing a unique tour and an insight into the Indonesian navy’s history. It also provides a rare peek into the crews’ life onboard, as most of the items and equipment have been preserved as they were when the submarine was in use.

Adjacent to the submarine is a park with a variety of cafés with regular live music performances. Behind the Monument there is a skate park which is open to the public. Occasionally, boat tours around the river in front of the monument are available.

Do visit these two monuments to learn more about the history of Surabaya and its heroes.

Opening Hours: 8am to 10pm every day

Bali to Flores Overland and Overseas