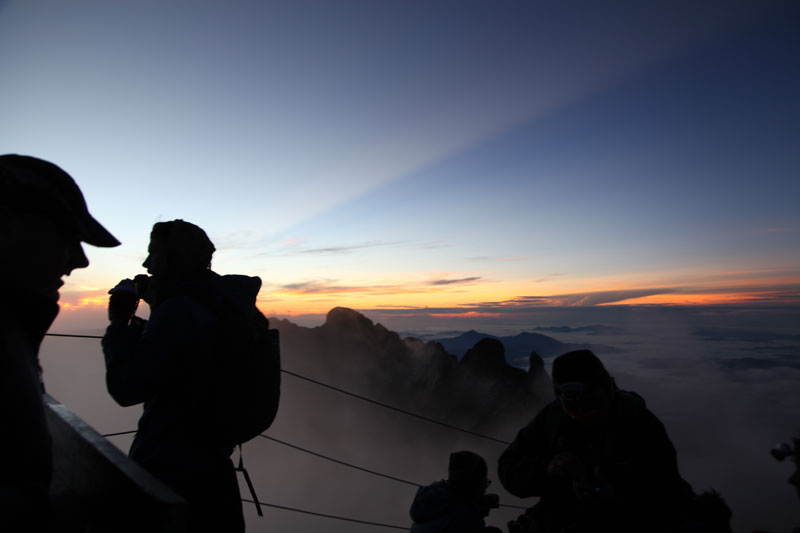 There’s a long weekend coming up in October and you’re trying frantically to book a villa in Bali but it seems everywhere is fully booked. Belitung has no availabilities and you don’t fancy attempting to drive to Bandung or Pelabuhan Ratu for fear it will take you hours and hours to get there. So where are you going to go?

My answer to you is Sabah, Malaysian Borneo. Direct flights from Jakarta to Kota Kinabalu (also known as K.K.) are available and are cheaper than flights to Bali. In two and a half hours you’re in another country and another world and you can enjoy a pedestrianized city with light traffic and fresh air. The attractions in K.K itself are limited to shopping, walking and eating, however, it’s what’s just outside of the city that makes the journey to this side of Borneo all the worthwhile.

Our trip was somewhat adventurous, starting with a two-day hike up and down Mount Kinabalu, located in Kinabalu National Park, a two-hour drive from K.K. Peaking at 4090.2 metres this is one of the easier mountains of this stature to conquer and a lot of effort has been put into this trail. Starting the ascent at 9 am, we hiked through the lush rainforest, admiring several miniature waterfalls during the way, and enjoying rest stations equipped with toilet and treated spring water.

The trail to Labuan Rata, the lodge where hikers rest overnight before ascending to the peak, is six kilometres up and we were four clicks in before the inevitable happened to slow us down – the tropical heavens opened and what a downpour it was. One thing every tour operator and website will tell you is to make sure to bring waterproofs and how right they all were. Waterproof trousers are the one thing you need most after a waterproof poncho.

Spotting Labuan Rata was a glorious moment, which meant shelter and rest. This lodge is made up of several unheated dorm-style rooms of various sizes, equipped with bunk beds and showers. Downstairs a large canteen area serves decent buffet meals for the famished trekker. After cleansing, adorning our thermals and eating as much as we could, our weary bodies tried to catch a few hours sleep before waking again at 1.30am for the final push to Low’s Peak to watch the sunrise.

Now, this is where the hike gets hard. Leaving at 2.30 am after a light breakfast, headlamps light the way up steep rock-face and there are actually three segments where you have to pull yourself up rope – gloves with a grip come in very handy. It’s a three-hour climb to the bitter-cold finish where the waking sun welcomes you with open arms and the incredible view opens up to you (if it weren’t below freezing I would have stayed for much longer admiring it).

Two hours later and back at the lodge, a big breakfast was thoroughly enjoyed, followed by a short hour’s rest before a four-hour hike down the mountain the same way from which we came. In true rainforest fashion, the heavens opened up again halfway down, but we smiled and enjoyed it knowing that we were on our way back to a warm shower in a warm hotel room and that our feet could soon get some much-deserved rest.

The next day we organized a day trip to visit a small orangutan sanctuary where young rescued orphans were being rehabilitated. At 130 Ringgit each this was a lovely morning out and meant we were free to walk, yet again, around the city in the afternoon. There are many day trips available, which you can book via a tour operator or through your hotel. Orangutan sanctuary trips book up fast so make sure to reserve in advance during high seasons.

Next on our itinerary was diving at the renowned Sipadan Island, one of the world’s top ten dive destinations. Sipadan, in the Celebes Sea, is only half a km in length and 200 metres in width, and was once at the centre of a territorial dispute between Indonesia and Malaysia, with Malaysia being awarded the island by the International Court of Justice on the basis of “effective occupation” in 2002. Jacques Cousteau said, in his film Borneo: The Ghost of the Sea Turtle, “I have seen other places like Sipadan, 45 years ago, but now no more. Now we have found an untouched piece of art.”

Untouched it may have been, but nowadays many boats from neighbouring islands take you to Sipadan and120 divers daily are permitted to dive in its surrounding waters, with a permit fee of 40 Ringgit per person per day. We enjoyed three dives a day and were lucky to gain access to Sipadan for two whole days, enjoying an abundance of sharks – black tip and white tip – Hawkbill turtles, schools of barracuda, schools of jackfish, schools of bumphead parrotfish and an array of other species of fish and macro sea life, including a rare spotting of a Dragon Seamoth which was one of the sweetest creatures I’ve ever seen!

With such a profusion of divers, it is so important to dive responsibly in these waters to lessen the degrading effect dive tourism has had on its once pristine reefs. We witnessed a diver carelessly diving along the bottom of the ocean, dragging his second regulator across the reef, breaking off bits of coral on his way. As much as we all tried to pull him up and tell him off in sign language, he carried on, which brings me to an important point; learn to dive properly before you attempt underwater photography.

A Holiday in London