Visiting an Indonesia-based animal park is the best way to get acquainted with the country’s unparalleled biodiversity spanning 4,800 kilometers across two gigantic geographic zones. Bali is fortunate to have three well-established world-class zoological gardens, all located in Gianyar District in Bali’s heartland, whose quality, professionalism and attractiveness would make any small island population proud. 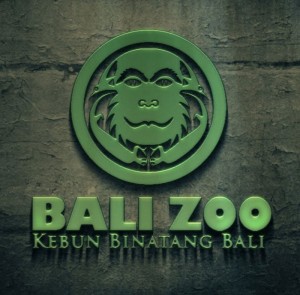 Built on a former coffee and cacao plantation, the Bali Zoo is set on 5.5 hectares of natural landscape filled with exuberant shrubbery, lawns, waterfalls, tall trees, long grasses and thick jungle-like vegetation. The enclosures are clean and spacious, re-creating in miniature the habitats of the respective animal being exhibited.

Maintained by a staff of over 100, receiving 10,000 visitors a month during the peak tourist season, the Bali Zoo is home to 350 animals including orangutans, gibbons, camels, porcupines, marsupials, the omnivorous binturong, the muncak barking deer and the mouse deer (kancil) of storybook legend.

The zoo is also a learning centre, promoting environmental awareness and wildlife conservation and educating children about endangered species. Plaques in front of each enclosure show a photo of the specimen, give precise zoological data in both Indonesian and English, plus a geographic distribution map.

Deep in the environs, we passed the Sumatran and Bengal tiger exhibits, the zoo’s heavyweights and crowd pleasers. To the delight of small kids, little animals such as marmots and rabbits are not neglected. All along the winding path zoo employees encouraged us to hold an exotic bird, snake or lizard. Visitors are even given the chance to feed the carnivores.

Suddenly I could hear our two kids shouting as they rounded a corner. In front of them was a big shaggy 22-year-old male orangutan just two meters away. Kids are able to get alarmingly close to animals at the Bali Zoo, unlike European zoos where specimens are kept at a distance.

Lethargic and deceptively harmless, the old overweight primate was calmly eating from an immense pile of fruits, carefully peeling tiny bananas and plopping them into his mouth. On the way out, while signing the visitor’s book, I read a few commentaries from other visitors: “I’m disappointed I couldn’t touch the orangutan,” and “This zoo needs more babies!” and “Better than Melbourne zoo!”

The Art of the Bird Park 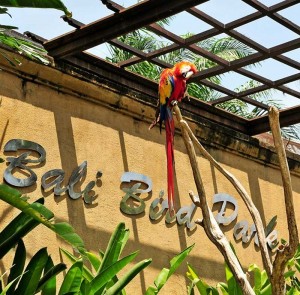 Twelve years ago when I first visited the Bali Bird Park (Jl. Serma Cok Ngurah Gambir, Singapadu, Batubulan, Gianyar, tel. 0361-299-352), it was a drive out into the countryside but now it’s just a 25-minute crawl north of Batubulan. Although the parking areas were full of cars and tour buses, the eden-like park itself easily absorbed all the passengers and still felt half empty.

We began our walk through the lavishly landscaped grounds, ponds and jungle grottoes in the cool of the morning when the birds were most active. I could hear the burbling, warbling, drawling, mournful, harsh, hollow, guttural, plaintive, staccato and ecstatic cries of hundreds of bird species. Accustomed to being around humans, cockatoos and parrots were sitting in the branches of trees, and peacocks and cranes were wandering about unfettered.

Next came cages holding amazingly colored macaws, followed by the dignified hornbills, mythological looking cassowaries with beady piercing eyes, then eagles, small owls, wading pelicans. So well camouflaged are some species that they were difficult to see in their leafy big cages. Smack in the middle is a world famous cultural icon, an authentic Torajan house from south Sulawesi. In other enclosures stood facsimiles of ancient Javanese temples.

Papua, a gigantic aviary adjacent to the ‘Rainforest Juice Bar,’ is full of exotic species from New Guinea. Except for the toucans, we had to keep our eyes peeled to spot birdlife. I nearly tripped over a stray drongo and Mambruk pigeon walking along the paths. I could hear the sharp cries of the Bird of Paradise – a member of the jay family – and the ghostly tremulous cries of other invisible birds from the eye level trek through the treetops under a canopy.

A white board in front of the new arrivals facility listed the resident Bali Starlings plus a list of the other species in the breeding program. I asked one of the curators if the breeding programs were successful. “Indigenous breeds like the Bali Starling are easy to breed, but non-indigenous species like macaws are difficult even if you have a healthy male and female. But we’ve been lucky obtaining protected species from outside Indonesia. Our park has the only Hyacinth Macaw in all of Indonesia.”

Just 15 meters away from the bird park, entering the adjacent Rimba Reptile Park means stepping back into the dawn of time. The atmosphere turned from open meandering parkland full of birdsong to a dark humid silent rainforest laced with a labyrinth of narrow paths. With more than 180 specimens, this is one of Southeast Asia’s rarest and most extensive collections of reptiles and amphibians.

We first came upon a cave-like reptilarium where we got a glimpse of rare terrestrial species behind glass. Well over 100 snakes inhabit Indonesia, the majority non-poisonous, but these cave-like corridors concentrate on the more venomous varieties: king cobras, deadly pit vipers and the extremely toxic taipan whose bite has enough venom to kill 300 people. Props like canon, driftwood, stone temples and fountains; wooden wagon wheels, hangman’s noose and pocked voodoo statuary made it a short visit for our young kids.

The pride of the park is its Komodo dragons. By this time it was mid-day and the famous monitor lizard was active, but half-hidden. I had to jockey with an Italian woman to get a clear shot of the giant lizard with my camera. We were both satisfied when the star attraction lurched out from behind a concrete wall and crawled towards us.

The stone pathways and stairs ultimately led to the park’s highest ground, a large open-air courtyard of pools and trees where iguanas and pythons roamed around and basked in the branches. The girls posed for photographs in front of a tortoise, then the caretaker handed them a magnificent very obliging sail-finned lizard, just long enough to record the experience for posterity.