Sumatra; while some may not know where it is, others conjure up thoughts of dark, unexplored jungles sitting on both sides of the Equator. The island of Sumatra is more than just an island; it’s a monster, being the sixth largest island in the world and the largest island in Indonesia. Compared to neighbouring Java, whose population is over 130 million, Sumatra’s population is sparse, at just under 50 million, so there is breathing room. Sumatra is sprinkled with volcanoes, thirty-five to be exact, and all sitting on the Barison Mountain range in the western half of the island. One of these volcanoes is a super volcano, Toba, with the largest crater lake in the world, aptly named Lake Toba. It is in this mountain range that the largest amount of Indonesian coffee and tea are grown. This mountain range is also home to the highest volcano in Indonesia, Mount Kerinci, with an elevation of 3,805 metres – something for the bucket list. 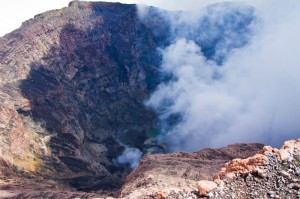 Mount Kerinci sits south of the Equator, in the Kerinci Seblat National Park, mainly in the province of Jambi. The park is an important home to hundreds of species of flora and fauna. Some of the most notable species are the endangered Sumatran Tiger and Sumatran Rhinoceros, which are endemic and not likely to be around next century if things don’t drastically change. This is the most important location in Sumatra for the Sumatran Tiger, and believed to have the largest population on the island; Leuser National Park in the North also has a population thriving.

Kerinci is also home to other beautiful animals, such as the tapir, sun bear, and several species of primate. One of the loudest primates are the gibbons (siamang), which live in the treetops and can leap up to distances of 50 feet between trees. They are the songbirds of the primate family, capable of being heard almost two miles away through the dense forest canopy. The Siamang is also endangered, they are suffering from a shrinking forest due to illegal logging for palm oil plantations, and hunting for the pet trade. That being said, they are still easy to locate in the park, just listen for their calls in the morning and evenings. 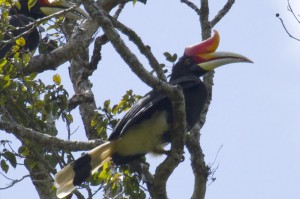 Kerinci is a famous spot for birders, who come to see many of the endemics, some previously thought to be extinct only until recently, such as the Sumatran Cochoa, Schneider’s Pitta, Salvadores Pheasant, and over 300 other species. Of course, here you can see many different types of hornbill, so big that you can hear them soaring above the canopy like a small airplane. If you’re a flower buff, you will also be overjoyed to know that here you can find numerous orchid species and the tallest flower in the world, the Rafflesia. To spot this, you may need to enlist a guide, or better yet, befriend a knowledgeable local. The park has so much to offer in way of flora and fauna, it is simply too much to write about here. But I must mention the myth of Orang Pendek (short person), a small bipedal creature that supposedly runs around the forest and has really only ever been spotted by local farmers and other locals who enter the forest. Obtaining a photograph of such a thing would surely make a trip of a lifetime.

Hiking to the summit of Mount Kerinci will put you at the highest point in Sumatra and on top of the highest volcano of Indonesia. Kerinci is still active, with some rumbling last year followed by black smoke. From the top you will feel the true height of this massive mountain, with beautiful views of the surrounding topography and the Indian Ocean. Neighbouring Lake Tujuh offers a beautiful view, best seen right as the sun is rising with colours painting the sky. 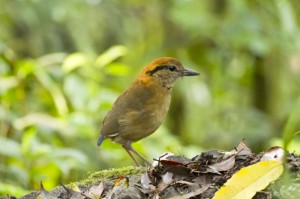 Mount Kerinci actually straddles Jambi and West Sumatra, but the trail starts in Jambi. Some say it is possible to hike to the top in one day, but you would indeed have to start before sunrise and return through the forest after dark. Walking in the forest after dark is fun and a great way to spot owls and frogmouths, but not advisable after hiking 12+ hours. Taking a few days to hike and camp is the only way to truly feel the beauty and experience what Kerinci is all about. Most hikers choose to leave early and hike straight through to shelter two or shelter three, the latter being just above the tree line and offering the best morning views straight from your tent; it’s cold at night so a sleeping mat and proper dress is required. There is a water source at both shelter two and three. After the first night, most wake before sunrise and hike the remaining hours to the summit for sunrise, and then make the arduous journey back. But if time is on your side, take three or more days to hike up, spending more time in the lower forest, as this is the only way to spot the wildlife and see some of the rarest birds in Indonesia.

The jumping off point is a small village named, Kersik Tua in the Kayu Aro Province of Jambi. This is about an eight-hour mini bus ride from the major city of Padang in West Sumatra. Padang can be easily reached via air, or alternatively, if you enjoy long Indonesian bus rides one can take a 20+ hour bus ride from Sumatra’s capital city, Medan. When in Padang and arranging your minibus to Kersik Tua, tell the driver to drop you at Pak Subandi Homestay, the driver will know the place.

Pak Subandi is one of many homestays in Kersik Tua, but his home-cooked meals and knowledge of the mountain make his place the best choice. Pak Subandi is also a very knowledgeable guide and birder, and so are his sons. As of January 2013, a guide is not compulsory, but there are stories of people getting forever lost on the mountain. So, if you’re not experienced with the Indonesian forest, hire a guide.

Mount Kerinci is the main attraction to this region, but there are many other places in the area to explore; more mountains, waterfalls, lakes, and some of the best remaining forest in Indonesia. So, if you are looking for adventure and enjoy hiking, camping and wildlife, Kerinci is calling.

Hiking the Hills Around Bogor