Gregg A. Hollomon partakes in the exhilarating, high-current dives of Komodo National Park to photograph the large and small delights this region has to offer.

The Komodo archipelago is truly an adventure getaway, but most importantly the people are lovely, and the diving is straight out of a Jules Verne episode. My wife and I decided to make a last minute trip to Komodo National Park, prior to our final departure from Indonesia as permanent residents. In the planning phase, I soon found that last-minute booking of a dive boat is an adventure in itself. My advice is to start at least six months out, as Komodo is almost as popular with the international crowd as Raja Ampat (particularly during high season of September to November).

Fortunately, a newly constructed airport in Labuan Bajo, Flores now serves daily flights which drastically shorten the trip out from Bali or other Indonesian locations. The town is a small port which is loaded with dive operators, light industry, homestays and restaurants. Once you land, it is very simple to get around with available transportation. Many of the two-star-and-up hotels offer free shuttle into town. 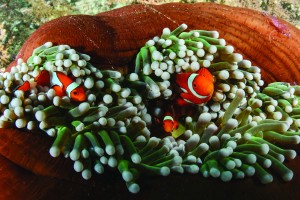 During our week of diving, I really didn’t have a chance to reflect on all the beauty, diversity and exhilaration the northern Komodo waters have to offer. Most of the diving days were followed up with a night dive, even though we were exhausted from the daylight hours. It was truly a situation where you felt you just didn’t want to miss out on encountering something exciting just around the corner. Over the week, we managed 16 dives, all of which were of variable in topography, currents, special critters and large feeding pelagics. The best dive sites (personal opinion) are Castle Rock, Crystal Rock, Manta Point, and Batu Bulong (hole in the rock).

Our first dive was a slope and shallow wall off Sebayur Kecil Island. In 2013, a rogue wave hit this beach and six-metre waves destroyed the upper reef of principally big table corals. Below the five-metre mark, life abounds. It was very exciting to see a large cuttlefish locating eggs while two males (or females?) spar it out for dominance. Further on, we found unicorn fish hunting small sardines while on the upper bommies, thousands of spectacular glass fish fill the water. Masked rabbitfish mill around during this whole show.

After an absolutely amazing sunset we headed back down for a night dive at this same site. We descend a sandy slope looking for flying gannets then headed east to another beautiful pristine wall. Purple glowing bioluminescence was everywhere. Jimmy, our guide from Flores, is a particularly good night spotter. Hidden within a crevasse of the wall was a large solar-powered nudibranch of over 20cm. As if that wasn’t enough, a companion shrimp was lurking on his back cleaning off parasites. Just a metre up is a sleeping green turtle. As my wife states, this dive was of a thousand eyes made up of cleaner shrimp, banded boxer shrimp, glass shrimp decorator crabs, flatworms and spawning soft corals.

My favourite dive of the week was Crystal Rock, north of Gili Lawa Laut. The top of this rock sits at wave-base and can sometimes be difficult to spot. The base of the monolith drops to over 35 metres but most of the fish action is at less than 27 meters. This site is known for big currents and must be dived during slack tide, which just means you can get down to depth prior to being swept off-site. Jump in the water and get down fast. Water temperatures range from 28 degree Centigrade near the surface to 19 degrees from deep water upwelling.

A fantastic fish bowl menagerie, the site offers giant cod and sweetlips at cleaning stations while huge schools of yellow-striped sweetlips and surgeonfish allow you to join in their ranks.

Surrounding all this action are scattered trevallies, jackfish and encircling white tip sharks.

Manta Encounter of a Third Kind

At Manta Point (Karang Makassar), we jumped into some highly churned water and started to drift-rip along the bottom at 17 metres. Five minutes later, we come across a huge manta which Jimmy later explained was a pregnant female. She was at a small cleaning station and floating into the current just about 60cm above a small set of rocky corals.

I came in upstream and latched my reef hook onto a rock to start the photography session. Before I knew it, she had further progressed in my direction and settled about 30cm right over me. I have never heard of a person getting crushed by a manta but the thought crossed my mind as this encounter played out. After a few moments she moved laterally away to my sigh of relief. Further down current we bumped into five more mantas with one completely black, known as Darth Vader. 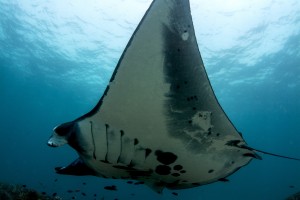 The scariest dive of the trip happened to be a simple dive at Seiba Kecil Island. Jimmy checks the local conditions but is unsure which direction the current will take us so he jumps in the water to look at the fish orientation. After he is satisfied, we drop down to 18 metres and go with the current. Almost immediately we are hit with a very strong down current. All this happened so fast none of us had a chance to get the reef hooks out and were basically holding on to small floor rubble that hopefully wouldn’t move.

The four of us were initially separated by a number of metres and it took some time for each of us to alternately make forward headway. I had my BCD completely full of air and every time I made a move I was swept further down. We slowly crept along the face of the slope hoping the current would let up. Once it did, we moved shallower and then promptly aborted the dive after the safety stop. This dive taught me a new level of respect for the unexpected; by the end of this 23-minute shallow dive we all were down to less than a half tank of air.

Some people say that diving Komodo is not for the fainthearted. I don’t agree with this general statement but certainly all divers should establish a plan of action in the case of separation from the guide or dive partner. This plan needs to be fully discussed and understood by the guide and others within the dive group. Additionally, I recommend everyone carry a safety sausage, reef hook and emergency strobe with you on all dives – even the simple ‘beginner dives’.

What makes Komodo so vibrant underwater is the flow of current bringing in an abundant supply of nutrients so divers just have to live with it. Live is the key word here!

Getting there: Garuda and Wings Air are the major airlines serving Labuan Bajo currently. These flights are not non-stop from Jakarta and may experience a short layover in Bali or Makassar.

What to bring: Your own diving equipment, or at least bring your own dive watch, sunblock and camera

What to do: Diving, snorkelling, touring the Komodo sanctuary on Rinca Island

Pulau Seribu – get away to amazing islands over Christmas without leaving Jakarta!

Taking a Spin in Kal-Tim