Being the multicultural country that it is, there are many ways of celebrating Christmas in Indonesia. Even the weather is a departure from the Northern Hemisphere’s white winters.

And the customs pose surprises. They range from gala dinners in fancy hotels to charity runs in shantytowns, from unfamiliar carols in exotic languages to Hillsong-style megachurch bands, from midnight Nativity wayang shows to Melanesian pork feasts in earthen ovens.

This holiday season, I decided to visit an unlikely Christmas destination. A 15th century Islamic palace that looks Hindu, but has Christian icons decorating the throne room: the Kraton Kasepuhan Cirebon.

A statement of multiculturalism

At the palace, I was greeted by Mas Iman, an abdi dalem (pledged royal servant) who has been in service for 25 years. No, you won’t find Christmas trees or Santa’s elves here. However, I thought the very history of Cirebon reflected the Christmas message of peace.

The Sultanate of Cirebon was established in 1445 as Prince Chakrabuana ascended the throne. Before that, the town was known as “Gunung Jati” and part of Pajajaran, a Hindu kingdom based in present-day Bogor.

Being a northern coastal town, Cirebon developed into a fishermen’s settlement. Cai Rebon literally means “shrimp water” in Sundanese; a reference to the fishy juice resulting from the production of terasi, the fermented shrimp paste that flavours nasi goreng and other Indonesian dishes.

“Cirebon” is also a corruption of caruban, which means “mixed” in Sundanese. This refers to the town’s mixed heritage, being on the border of Sundanese and Javanese territory. Today, Cirebonites speak a distinct dialect of Javanese, heavily influenced by Sundanese.

The Sultanate’s most famed ruler is Chakrabuana’s nephew Syarif Hidayatullah, who reigned from 1479 to1568. He is later canonised as Sunan Gunung Jati—one of the “Wali Songo” or nine saints responsible for the spread of Islam in Java.

Chakrabuana lost his right to the Hindu throne of Pajajaran due to his conversion to Islam, and subsequent dedication to spreading the faith throughout West Java. “Cirebon was established at the end of the Hindu era, and the dawn of Islamic kingdoms,” said Mas Iman.

The crab claw gapura resemble the entrance of a Hindu place of worship. Despite having converted to Islam, Chakrabuana built the gapura in 1430 to honour his ancestors’ Hindu heritage. The original 15th century bricks were glued together using palm sap and rubbed together to produce adhesive-strengthening heat.

“As you can see, even centuries later, they still remain strong here today,” said Mas Iman, adding that palm sap is much stronger than cement.

The gates surrounding the 25-hectare palace complex are adorned with pieces of Chinese and Dutch porcelain. The foundations of the pendopos (gazebos) in the outer courts share the gates’ Hindu-style red bricks. It bears the mega mendung Chinese raincloud relief, which symbolises the Asian philosophy that a leader must be cool-headed, thus restoring balance in a tempestuous society, and showering it with life. 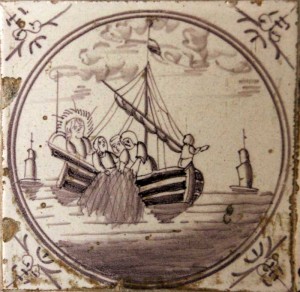 We entered the throne room from a side entrance. Footwear must be removed to acknowledge the Sultan’s presence as holy ground.

“The Chinese believe that in residential houses, the front door and the back door must never be exactly opposite each other. That’s why the corridor leading to the front door is slanted,” explained Mas Iman. “The Chinese call it feng shui.”

The front door is open only on sacred days of celebrations, which include Javanese New Year (“1 Suro”), Sunan Gunung Jati pilgrimage day (“Grebeg Syawal”), and the birthday of Muhammad (“Maulidan”).

I was drawn to a framed picture of the Cirebonite royal emblem. Macan Ali is a sitting tiger stylised in the Arabic calligraphy of the first Islamic creed (“No other God but Allah”). Somehow, it reminded me of the Jewish Lion of Judah, which in Christian tradition refers to Jesus Christ.

A prominent relief in the room is the Kembang Kanigaran (national flowers), designed by Prince Kararangan in the 18th century. The red, green, and gold lotus bouquet relief is made of limestone.

Lotus, in Buddhism, symbolises a leader rising above the waters and protecting the habitat underneath. The red and gold are obvious Chinese influences, symbolising joy and prosperity. The green reflects the Sultanate’s Islamic heritage and the colour of Paradise. A pair of white-gold cockatoos are perched on the bouquet, symbolising peace.

Finally, the walls bearing the Kembang Kanigaran are covered with blue and brown Delft ceramic tiles. In the 17th century, Dutch colonialists presented them as gifts to Sultan Syafiudin Matangaji, hoping to bribe him into facilitating Dutch power over Cirebon.

“Many Sundanese kingdoms fell back then,” recounted Mas Iman, “including the Banten Sultanate – established by Sunan Gunung Jati’s son. The Dutch burned its palace to the ground. Today only a mosque remains.” But Cirebon did not give in to bribes and thus endures strong.

Nevertheless, the Sultan graciously cherished the Delft tiles, which were painted with scenes of Christian biblical accounts. These include Priest Zechariah and the angel, the Immaculate Conception, Joseph and Mary en route to Bethlehem, the Passion of the Christ, the Crucifixion, and the Conversion of Paul.

“Islam recognises the Torah, Psalms, and even the Gospel as the Word of God. Therefore it is acceptable to decorate the palace with these Christian tiles,” said Mas Iman. “We share accounts such as the Creation of Man, the Great Deluge, the Sacrifice of Abraham’s Son. They’re both Islamic and Christian. And both religions teach goodness.”

Today, Cirebon is still known as a city with strong Islamic roots, but one that flaunts a population of diverse faiths. It has one of the lowest rates of religious hate crimes in Indonesia, and adherents of any religion can worship there with peace.

So this Christmas was not exactly tree trimming, Santa shopping, and church services for me. But on this trip to Cirebon, I felt that perhaps Indonesia is, after all, a land which many non-Christians who walk in the footsteps of the Saviour call home. And with that thought in mind, I think I could hear the angels singing, “Peace on earth and goodwill to men.”

You may request an abdi dalem to guide you on tour. Tipping them is not obligatory, but may be appreciated since they are unpaid devotees of the Keraton.