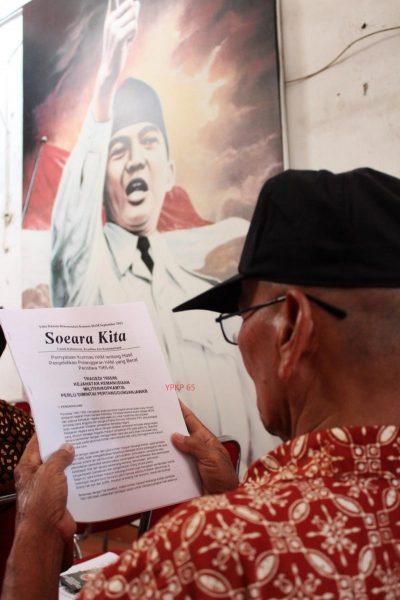 When I was 17 in mid-sixties London, I was at school studying for my GCE A levels before going to university. I knew that my father, a civil servant, voted Labour and his father voted Conservative, the familiar left-right political divide, but I wouldn’t have the vote for another four years.

At that age, in 1965, Bedjo Unjtung didn’t either, and wouldn’t be given the opportunity until 1982. His father was a People School teacher and a member of Persatuan Guru Republik Indonesia (the Indonesian Republic Teachers Union), which was labelled by Suharto’s military as a leftist organization because it had supported Sukarno’s policies.

As with Pramoedya Ananta Toer, in early October 1965, his father was detained, moved to Nusakambangan Island and then exiled to Buru Island without trial until his release in 1979. He was imprisoned, as were some 15,000 others.

Bedjo was aware that the military sought the supporters of Sukarno, the first president, who, along with their families, they categorized as left wing.

However, he says, “Politically and ideologically I knew nothing. My duty was to just study.”

Yet he was aware too of the widespread kidnappings, enforced disappearances and mass killings, with peasants and worker activists and their families being detained and the wholesale destruction of villages.

From 1965 until 1970 Bedjo avoided the military by sleeping in parks or on pavements, and during the day “survived by walking around Jakarta selling newspapers.”

“On 24 October 1970, I was captured by Military Intelligence agents in Jakarta and spent the next year in the Kalong interrogation camp. I was interrogated and tortured using electric shock. Both of my index fingers were connected by electric wire to a machine. Oh, it was so painful. It was like being knocked, kicked, without interruption.

“There were hundreds of political detainees in the small barracks. A room adequate for two people held twenty. The toilet was also used to hold detainees. I could not sleep sometimes because it was difficult to breathe.

“The door was shut, with only a small hole to pass in water or food. I was malnourished; the small ration of rice, dirty rice, was full of sand and stones. At least five detainees died in this camp; two people attempted suicide by hanging and two others by plunging into the deep well. They did this because they could not bear the torture in the hell [sic].

“There is still much to tell about the move to Salemba prison and then to Tangerang forced labour camp. There, because the military did not supply food to the detainees, I would eat rats, snakes, crackers, snails, poisonous herbs just to survive.”

Upon release, former political detainees were forbidden to apply for jobs in governmental sectors, and their identity cards had a special code ‘ET’, which stood for ‘Eks Tapol’ (tapol is an acronym of tahanan politik, the Indonesian words for ‘political prisoner’).

In 2007, the Supreme Court accepted a petition from victims’ groups for a judicial review to ban Presidential Decree Number 28 Year 1975, which authorized the discriminative code. The court ordered President SBY to withdraw the decree on the grounds that it was unconstitutional. However, there is now a ‘special number’ to differentiate between the regular rakyat and former political detainees.

“I studied those subjects when I was in the prison. I collected waste paper such as cake wrappers to write down words from anyone who knew English. I also studied music using a guitar I made in the jail using waste wood.

“Most of my students were children, teenagers and sometimes adults. They came from well-to-do Indonesians and expatriates [sic]. Every day I rode nearly a hundred kilometres around Jakarta on my small motorbike with a guitar on my back.

“But in May 1998, with the mass riots, anti-race sentiments and Jakarta burning, most expatriates left and I lost my students. Fortunately, some Indonesian students still continue, although not so many. My wife is a government teacher with a regular salary, so I still live in a simple way.”

Most of Bedjo’s time is now spent with Yayasan Penelitian Korban Pembunuhan 1965/1966 (Indonesian Institute for the Study of 1965/1966 Massacre). YPKP65 was founded on April 7, 1999 by such former political detainees as Pramoedya Ananta Toer, the novelist, who was also exiled to Buru, Ibu Sulami, secretary-general of the Indonesian Women’s Movement (Gerwani), and Hasan Raid, author of The Struggles of a Muslim Communist.

“It is purely a non-profit institution, sometimes I have to contribute what I have to work for the victims. I am not paid but have dedicated my life and soul for humanity.”

YPKP65 has at least 200 branches with 2,000 volunteers throughout Indonesia. The number may increase as the investigation has not reached all areas. It is estimated that there are somewhere between 80,000 and 200,000 survivors still alive, all of whom remain stigmatised.

Two years ago Komnas HAM (Indonesia’s Human Rights Commission) issued a report which had taken three years to compile due to the continuous intimidation of witnesses and a distinct lack of cooperation from the military and bureaucracy. Their conclusion was that the state-sponsored purge that followed the 1965 aborted coup met all the criteria of a gross violation of human rights, and that government officials were involved in the systematic and widespread killing and torture of members of the Indonesian Communist Party (PKI) and countless other civilians with political ties to the group.

President SBY ordered the Attorney General’s Office (AGO) to follow up on the findings. Komnas HAM also called for the establishment of a Commission for Truth and Reconciliation (Komisi Kebenaran dan Rekonsiliasi – KKR). However, the 2004 law which would establish one was not enacted because no members were appointed. Then, in 2006, the Constitutional Court annulled the law on petition from civil rights groups who feared that the legislation was so flawed that it would become a vehicle for granting amnesty without necessarily discovering the truth or compensating the aggrieved.

There are any number of NGOs seeking both clarity and compensation for the human rights abuses carried out during Suharto’s Orde Baru (New Order). These include the Victim Solidarity Network for Justice (JSKK), KontraS (the Commission for the Disappeared and Victims of Violence), and Justice for Munir, Amnesty International.

Bedjo says, “YPKP65 cannot work alone. It must work together with people and groups which have the same vision and mission, which is to promote and strengthen Human Rights and Democracy.”

Perhaps now there is a renewed hope with a new president committed to changing the nation’s mindset? On December 10 last year, International Human Rights Day was the first time that an Indonesian president and his ministers attended ceremonies and discussed the issues.

“My feeling of relief is just a drop of dew in the desert. I have to accept the reality that Jokowi’s cabinet is still encircled by parties which supported the New Order regime and that behind the screen there are some generals who have been involved in human rights violations.

“But I remain optimistic that he can take action because civil society, human rights victims, and marginalized people who voted for him will always demand that he keeps his promise to uphold human rights.”

However, if there is no action, Bedjo says that YPKP65 intends to take the case to the International People’s Tribunal which meets in The Hague in November 2015.

“According to international covenant, if the state does not have ability and willingness to carry out the case, international law will take it over.”

Whatever their politics were fifty years ago, people suffered, and the suffering is being passed down through generations. It is surely time for a resolution to this; no-one is seeking retribution. The recognition by the state that a great wrong has been done will surely ease the burden of victims, perpetrators and their offspring.