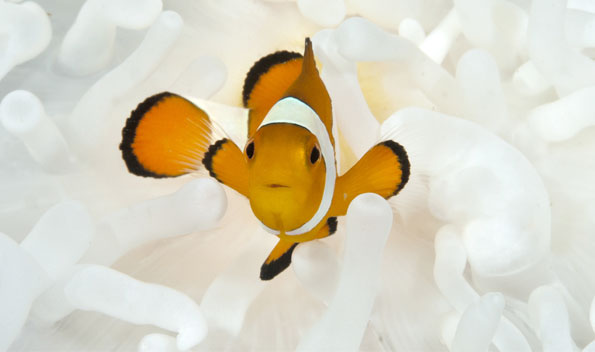 Although the famous animation film starring a young clownfish and his father took place in Australia’s Great Barrier Reef, Indonesia is the real Nemo Country. The Island of Bali hosts up to six different species of clownfish in its waters; a real hotspot of biodiversity.

In a blessed land like Bali, it’s not surprising that even tiny little fish like “Nemo” have decided to settle down and establish their permanent house here. Nemo, otherwise known as clownfish or anemonefish, live in tropical seas off the Indo-Pacific Ocean, from Japan until the Andaman Sea, Maldives and Red Sea. Clownfish live in symbiosis with sea anemone, which are colourful polyps which live on the sea floor attached by an adhesive foot, called a basal disc, and have column-shaped bodies ending in oral discs and many stinging tentacles. Some species of clownfish are very picky about which anemone they will live in, while others are more generalist, so can occupy more than one single species of sea anemone. 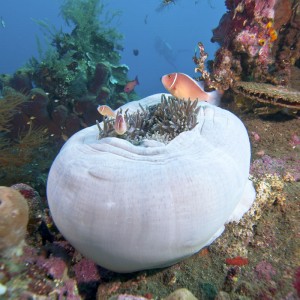 Many anemonefish species change from generalist to specialist depending on locations, especially in areas of high biodiversity and density like the Indonesian archipelago. It is something similar to what happens when different species of monkeys live in the same area; some of them like to live only in a specific tree, while other monkeys prefer to stay on the ground, and others in any tree at all.

The clownfish’s use of sea anemone as shelter is a wonderful example of a symbiotic and mutualistic relationship where the anemone protects the fish with its stinging tentacles, and the little fish fight against any predator that may be able to eat or harm the anemone. The skin of a clownfish is immune against the tentacles, so it can live protected inside the anemone, as well as indulge in food scraps left from the anemone’s meals and occasional dead anemone tentacles.

Clownfish have a strict social hierarchy inside their anemone host, with a big female at the top of the society, followed by a mature male and many immature individuals. If for some reason the dominant female dies, the male changes sex, becoming female, and the first immature fish in the hierarchy becomes the mature male. This strange phenomenon of changing sex is called Hermaphroditism and is typical of many fish families. In the Finding Nemo movie, when Nemo’s mother was killed by a giant barracuda, the father should have changed sex, turning into a big female, but maybe this phenomenon was a little too complicated to explain to the young audiences of this movie! In coastal waters surrounding Bali, it’s possible to observe up to six different species of clownfish, maybe even more considering some rare species are difficult to find. Every clownfish has a preferred place to live, referred to as their habitat; coral reefs, shallow lagoons and sandy bottoms. But all of them follow the same lifestyle, even if some are more aggressive than others when an observer approaches them. A number of these brave little fish can even bite fingers or smash into scuba masks while trying to fight off the potential danger to the anemone and the clownfish’s family.

The most common species in Bali is the Clarki Anemonefish (Amphiprion clarki). It’s a very generalist and competitive species, normally black and orange with two white stripes, actively defending his anemone host against predators, even very big aggressors, including divers. It’s possible to find this fish in almost every location, including Nusa Penida, Lembongan, Amed, Tulamben and Menjangan, the most common destinations for scuba divers and snorkelers. The “Real Nemo” (Amphiprion ocellaris), orange with white stripes, is also present, even if less common, but it’s easily observable in coral slopes like those present in Nusa Penida (South Bali) and Pulau Menjangan, in North Bali.

The Groundbreaking of LRT Bali Is Planned to Be Mid-2020