When I was growing up in suburban Surrey all those years ago, I knew little of the East beyond the usual clichés like ‘magical’ and ‘tropical’. I knew of Borneo. To me, Borneo was a land of mystery, impregnable jungle and amazing wildlife. OK, so I am showing my age. Today, when people think of Borneo they think of deforestation, climate change and disappearing flora and fauna. I know which image I prefer!

Balikpapan is the major entry point to the island known in Indonesia as Kalimantan and is home to more than half a million people, including a sizeable population of expats attracted by work in the energy sector and teaching.

At first glance, the city has little to interest people with time on their hands. The main road hugs the coast from the airport to the port yet any coastal vistas remain hidden behind drab shophouses, government buildings, hotels, malls and the like. It certainly lacks the architectural potential of a Jakarta or a Surabaya, lacking their history or their heritage dating back centuries. Indeed, Balikpapan, before the discovery of oil and gas towards the end of the 19th century, was little more than a fishing village.

Despite its modern wealth and feel, Balikpapan is an unhurried town. The traffic, for example, keeps moving! I asked one wizened old expat with experience of Jakarta and Balikpapan if the town suffered from the chronic traffic jams the capital city does. “Yeah, I once got stuck on the road by the airport after a 50 tonne crane turned turtle,” he said before returning to his beer.

So, what do people do for fun? Well, there are the grizzled old hands, of course, who like nothing better than getting down to their favourite beachside bar to the north of the airport and shooting the breeze with their pals.

For those with a more sporty bent there are a number of activities to get involved in, including the ubiquitous Hash which run on different days of the week – check the BIWA website for details.

Australian football is well represented with the Borneo Bears (www.borneobears.com). Some of their players recently competed in an international event in the home of AFL, Melbourne, and despite not winning any games, acquitted themselves pretty well by all accounts. They also host an annual AFL event which attracts teams from around the region. There is also a rugby team called the Balikpapan Bears (http://balikpapan.bears.over-blog.com) which gets to travel a fair bit.

For the golfer there are a couple of courses. The Karang Joang Golf Course and Country Club is out of town along the road to Samarinda, while the Sepinggan Country Club is perhaps more central. There is also a social golf club called Best Bunch Balikpapan which meets up every Saturday at Sepinggan and I am sure they would welcome out-of-towners.

For something somewhat less hectic, the Balikpapan International Women’s Association is a social and charitable group based in the city. Their aim is to organise activities of interest for women living in the city, to foster fellowship, to welcome new members and to promote Indonesian cultural activities. Among their regular activities are a nine-hole round of golf and a weekly bike ride taking them to new and interesting locations near the city.

The BIWA have also put together a handy little directory for Balikpapan, listing useful shops and retailers, but perhaps the best feature of the book are the maps at the back. 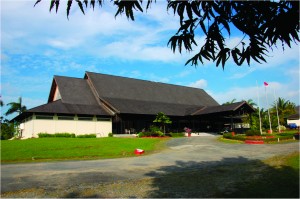 Sitting on the coast, Balikpapan is ‘blessed’ with a number of beaches. Kemala, for example, is fairly central and kept pretty clean though its location does mean it gets popular, especially at weekends.

There are a number of other beaches further afield, including Manggar and Lamaru, and no doubt all along the coast heading north the adventurous would find their own little coves given their own transport and plenty of time.

Balikpapan sits on one side of Balikpapan Bay and it is possible to cross to the other side by hiring a speedboat from Semayang harbour. Maybe not the most exciting of maritime journeys Kalimantan has to offer; you do get to see the industrial complex that provides much of the city’s wealth. And once you are on the other side, things get even more laid back!

For those who enjoy getting back to nature there is still some left. The Margomulyo mangrove is fairly close to the centre of the city and has a boardwalk that allows visitors the chance to try and spy some of the local wildlife. Another type of wildlife exhibit is the crocodile farm several kilometres past the airport.

A far more responsible animal exhibit is the Sun Bear Education Centre, which sits at the 23km marker along the road to Samarinda and offers a refuge to bears that have been rescued from less salubrious surroundings. Balikpapan has a strong, symbolic attachment to the bear with its image adorning the coat of arms. There is a statue of one in the city centre and the local football team are nicknamed the Beruang Madu, the local name for the animal.

Taxis can be easily booked by calling ahead and the drivers use their meters. Alternatively, you could take the plunge and try using the local mini buses or angkots. The blue number six is a useful service that runs along the main drag and can drop you off by Kemala or the harbour. Going the other way, it goes as far as Damai where you can change to the number seven and continue your journey north to the airport and the beaches at Manggar.

Check out www.balikpapanexpats.com. It doesn’t look like it has been updated for a while but is still perhaps one of the best resources online. The Balikpapan International Women’s Association have a new website and also produce an excellent Balikpapan Guide Book, an invaluable asset for people looking to stay for a while. You can find the BIWA at their new website http://b-iwa.com

There are the usual franchise-type places at Plaza Balikpapan right in the centre of the town. The King’s Head is a few kilometres out past the airport and offers a typical western style menu along with a grocery store upstairs. Other bars with names like Joy’s, Jack’s, Yuli’s, Martha’s and Sky Bar offer the customer drinks and food at all prices of the spectrum. There are also places to enjoy a bite to eat along the seafront so you can watch the tankers sail past while enjoying your seafood.

Cruising on a Borneo River