Ibu Meut has a charming smile, which belies the fact she works extremely hard selling her dried fish to the passers by underneath an overpass at Pasar Kebayoran Lama.

In fact she never gets a break working seven days a week to feed herself, husband and beautiful 3-year-old daughter Tasya. At 25 years of age Meut comes from Semarang where she used to work in a Kretek factory making cigarettes. She would like to return to Semarang one day as her family lives there, but decided to move to Jakarta five years ago after she met her husband and he wanted to move to Jakarta. 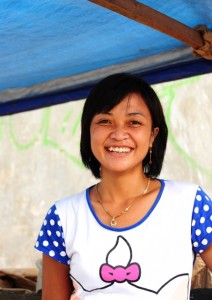 She buys the fish from a Fish Seller every two days and depending on the type of fish she is selling some kinds such as Teri Medan can last up to one month.

Her hours of operation are midnight until 8.30 am when she gets a two-hour break, and then works until 5 pm.

She would love to have more children but it is difficult some weeks to earn enough to live on. Meut is clearly devoted to her daughter who spends all her days sitting most patiently as her mother tries to make ends meet.

She is thankful for the Jamu lady who keeps her healthy and strong with her potions, as getting sick is simply not an option for this happy, smiling lady.

An Endless Journey: Reflections of an Indonesian Journalist