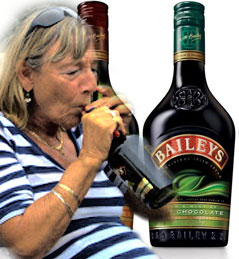 Mrs. Bennett was my landlady when I was 19 years old and she was a marvellous example of the stereotypical bulletproof older English woman. She was a solid round shape with no “figure” to speak of, and she was always dressed impeccably no matter what time of the day or night you might see her. She looked about 65 years old when I met her 30 years ago, she still looks the same now and I can’t imagine for the life of me what might kill her.

The flat my friend Steve and I rented from her was originally the upper floor of her semi-detached house and it was about the size of two average hotel rooms. Mrs. Bennett lived downstairs and we shared a front door so she knew just about everything we got up to, but she was very open-minded and she sometimes enjoyed a drink so the relationship worked quite well. We referred to her affectionately as “Mrs. B” and she always referred to us as “my boys”. I lived there for two years and it was a time of parties and sometimes unruly behaviour, but our relationship with Mrs. B never wavered. In fact she became something of a mother to us and she protected us every chance she got as the best of mothers would.

Steve and I were in our local pub one Friday night when about five pints of beer each suggested that a party at our flat might be a good idea. A couple of hours later almost everybody who had been in the pub was in our small flat, the music was pumping, the laughter was loud and the beer was flowing. Ten minutes after that Mrs. B was at the door with one of the neighbours.

In other circumstances I would have expected this to mean trouble, but I knew Mrs. B well so I opened the door and kept my mouth shut. She turned to the stern-looking neighbour. “Mr. Watson, this is Eamonn”, she said briskly, and then to me, “Eamonn, Mr. Watson.” I offered my hand and Mr. Watson shook it reluctantly. Mrs. B turned back to Mr. Watson. “Eamonn is fireman Mr. Watson, and just today he was promoted to sergeant. I’m sure you wouldn’t begrudge one of our brave firemen a small celebration on this special occasion would you?” This was all complete nonsense of course, I was still a complete rookie and there is no such thing as a sergeant in the fire service.

In the pregnant pause I adopted my best pathetic, pleadingyet-proud expression and Mr. Watson’s face slowly softened. “Well… of course… but if you could just please try to keep the noise down a bit?” I raised my hands in mock surrender. “Thank you, Mr. Watson.” I said. “We will certainly try to keep it down.” Mrs. B rubbed her hands together with satisfaction and said, “Right, that’s that then”, before shepherding Mr. Watson out. She returned a few seconds later with a broad smile on her face. “That’s going to cost you a large Bailey’s my boy”, she said as she brushed past me into the flat.

An hour later she was dancing in the middle of the living room and drinking Bailey’s Irish Cream from a very large glass while surrounded by people around one third her age. At first it was a little awkward, but everyone quickly realised that she was a good sport and she soon became an accepted part of the crowd. It all got a bit crazy after that and Mrs. B was right in the thick of it. I went to bed about 3am.

In the morning I found Mrs. B sound asleep on the sofa with a half-empty bottle of Bailey’s in one hand and a battery powered ladies’ accessory in the other — obviously somebody’s idea of a joke. To spare her blushes (and mine) I tried to gently remove the disturbingly lifelike replica from her hand without waking her up, but it burst noisily into life as soon as I touched it and Mrs. B woke with a start. She snatched the accessory and the Bailey’s tightly to her chest as she looked around the room in a daze trying to piece the situation together.

After a few seconds she stood up slowly and gracefully made her way past me to the door without saying a word, buzzing loudly as she went. She closed the door behind her. Then the door opened again and Mrs. B came back fully composed. “I think this is yours”, she said, and handed me the Baileys. I accepted it in silence and she left. The incident was never mentioned again.