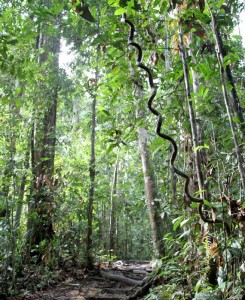 The title for this piece is perhaps a little ambiguous, as it will revolve around orangutans of Borneo rather than the Gibbons or the Proboscis monkeys of that region. The orangutan is, of course, a giant ape and in many ways just one step removed (evolutionary speaking) from the human species.

Who can resist an orangutan? Well, quite a few actually.

For starters, try the palm oil production companies or the illegal loggers who are in the process of decimating Borneo’s magnificent rainforests. The upshot of this is that the orangutan’s habitat is fast-shrinking, along with the habitats of all other tree dwelling species as the chainsaws roar and the forests fall.

My particular theory is that the more people who make the journey to visit these critically endangered species, the more attention will be bestowed upon them.

There are two ways to see the orangutans, those in the wild, or those in the numerous ‘rehabilitation’ centres scattered throughout Sarawak and Kalimantan. The rehabilitation centres are the easiest, although I found it rather circus-like with the antics at feeding time almost scripted for the adoring tourists who flock to these sanctuaries.

One of the easiest to get to is the Semenggoh Wildlife Centre just a few miles outside of the capital, Kuching. Here 29 orangutans live in just 650 acres of preserved rainforest. Unfortunately for a troupe this size, the area is far too small. They are nomadic creatures and generally fairly solitary. The males seldom tolerate other males on their patch of jungle and in this particular centre, aggression amongst the older alpha males is becoming more frequent.

Rehabilitation is a wonderful concept, although it has yet to be proven successful. Those in ‘captivity’ will have contact with humans and naturally pick up strains of bacteria not known to those orangutans in the wild. When released, it has been found that the wild orangutans will succumb too easily to human diseases from which they have no immunity.

Having said that, if you have never had the experience of seeing an orangutan, the centre will not disappoint; they are simply lovable to look at, highly intelligent with their basic use of tools and their ability to reason. I read a report recently from Atlanta Zoo where two orangutan females now play competitive video games! It has been noted that in this particular sanctuary the alpha males will actually plan their day in advance, working out various times to move around and scout out various locations where they will spend the night.

For those more adventurous and wanting to see orangutans in the wild, it is best to venture to the wonders of Kalimantan. The Gamung National Park just across the border from Sarawak in West Kalimantan is the least visited national park in Indonesia. The density of wildlife is astonishing and if you are lucky you may spot the rare and incredibly shy maroon langur. 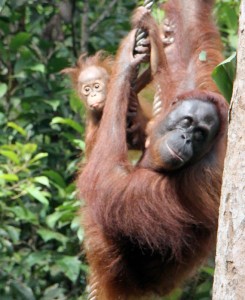 There are an estimated 2,000 – 2,500 orangutans living in the park, so you are sure not to be disappointed. If you do decide to go there, head to Ketapang, which is the main gateway and secure a permit to visit from the wildlife centre. The Kutai National Park in East Kalimantan is another gem where an estimated 700 orangutans reside, although logging and palm oil plantations are slowly but surely creeping ever closer. Access is easy via the city of Samarinda, but be sure to get your permit at the small town of Batang close to the main gate.

Tourism, in the case of the orangutans, is a good thing, as the more people who visit will surely bring more and more pressure to their plight. The more people notice, the more noise people make, simple.

Borneo is one of the most incredible places on earth. The world’s third largest island and home to species that mankind has yet to discover. The quest for profit has taken over here as palm oil plantations now cover vast tracts of land where ancient forests once thrived. These easy-to-farm plants are in fact a blight, as when their life cycle has finished not much else can be grown; the tree will have sucked all the nutrients from the soil.

Short term thinking for a quick return, while the acrobatic gibbon, the shy proboscis monkeys as well as the majestic orangutan will one day no longer be with us.

Malaysia (Sarawak) is far more visited than Kalimantan. Its attractions are well-promoted and developed for tourism. If visiting Kalimantan, it’s a good idea to learn some basic Indonesian phrases, as English is not widely spoken. Better still get a guide for the duration of your stay. Kalimantan’s culture is richer, the forests deeper and the people so much friendlier. Check with the local government offices in all four provinces as they will be delighted to help.

So, if you never go, you’ll never know.

The easiest and most efficient way to travel to Sarawak or Kalimantan is to fly.

Air Malaysia via KL has daily flights to Kuching, the region’s capital.

To Kalimantan the best option is to seek out deals out of Jakarta. Air Asia now runs a 3 X weekly flight from Denpassar – Kota Kinabalu.

For the more adventurous, ferries to and from Borneo can be boarded from several locations within Indonesia. Trawl the web for the best routes that will suit you.

If on a whistle’s top journey, this is the quickest and easiest way to see orangutans. If using public transport take the No. 6 bus on Sarawak Transport co. to the main gate and walk the rest of the way (about 20 minutes). Easier still, take a taxi for the 30min ride from the centre of Kuching.

Highly recommended. To travel there the easiest way is to contact:

This park is adjacent to the main city of Samarinda.

WHERE TO SLEEP AND EAT

Well you can’t take my word for it. Do what I do and visit Lonely Planet’s Thorn Tree section and take other travellers’ tips. Alternatively, see what Trip Advisor has to say.

Sorting 70% of South Tangerang’s Waste with ABU and Co.